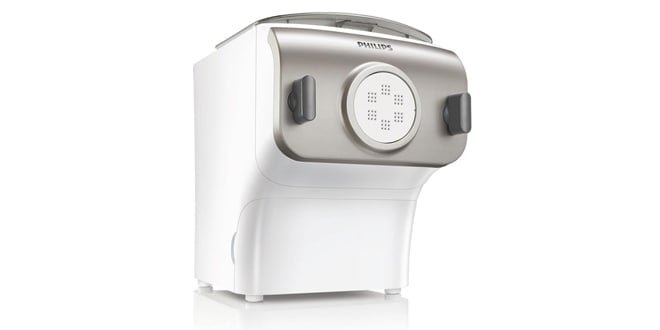 Simple to use, this machine makes fresh pasta with just a few ingredients.

Pasta – yes noodles are often on the table at our house. We love spaghetti, fetuccini alfredo, lasagna, spicy pepper sausage pasta and so much more. Probably made a couple times a week at least, I have many bags of dry pasta on the pantry shelf downstairs.

There is no question that there is a huge difference between dry and fresh pasta. Fresh pasta has a far superior taste and texture. I have some Italian friends whose mothers makes fresh pasta all the time. While I have tried it in the past, I personally found that it takes too long for me to make a big enough batch for my family. On top of that, I was not very good at it, with the pasta having questionable texture.

The Philips Pasta Maker is quite the interesting machine. It does one thing – it makes pasta. But, what it does, it does well. A double batch of pasta is made in 15 minutes and it tastes better than if I made it with my own hands. 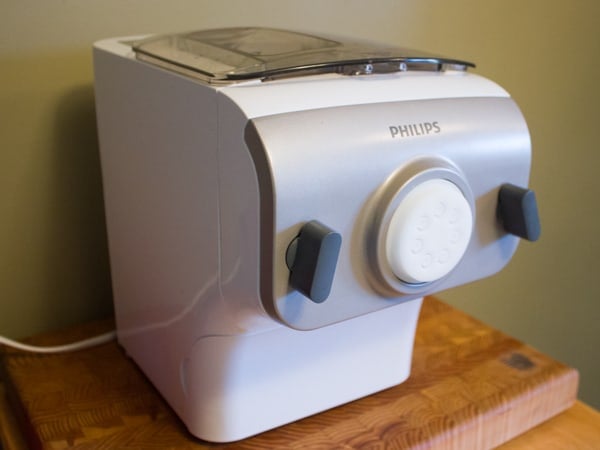 The machine is nicely designed and maximizes the space that is needed. Fairly narrow, the unit has a small footprint. The dials on the front of the machine allow the cover plate to be removed so that the pasta disc can be changed. This also allows for the internal parts to be removed for cleaning. 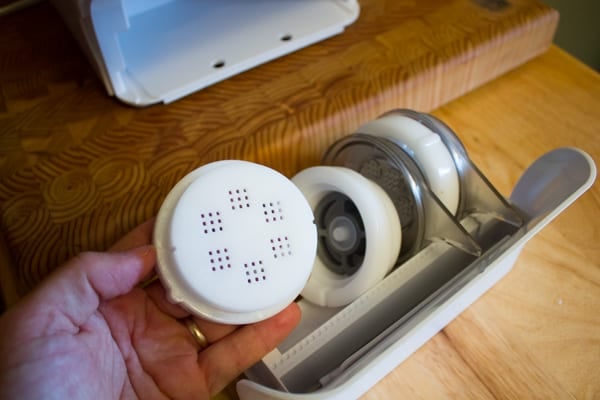 There are 4 different pasta shape discs. They include spaghetti, fettucini, penne and lasagna. They can easily be installed on the machine to make any of these types of pasta. The discs, along with an included plastic cutting tool, are stored in a tray that slides in the bottom of the machine. There is also a 4 disc accessory pack that can be purchased separately to give 4 more different pasta shapes. 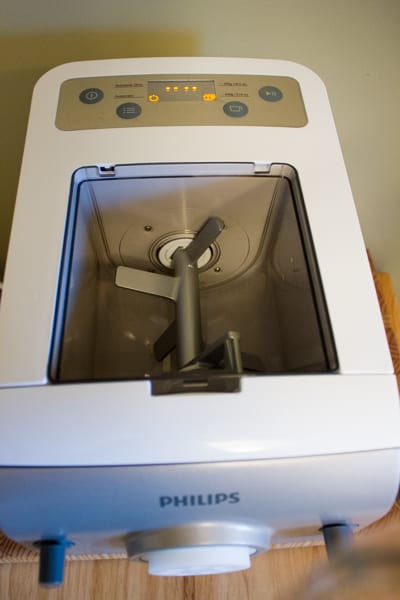 The inside of the chamber shows the non-stick kneading paddles. During operation, they move both ways to mix and knead the pasta dough. 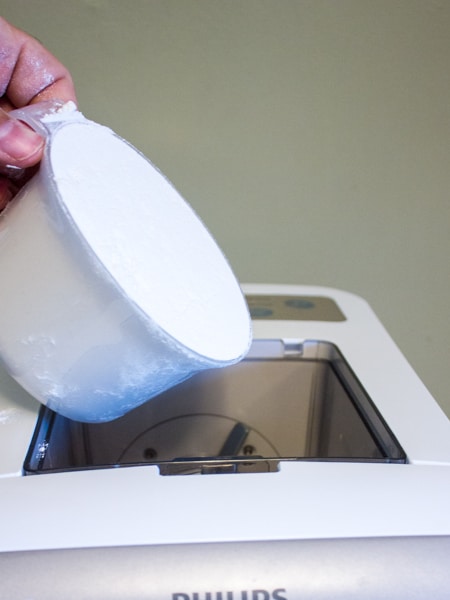 The recipe book shows that you can make a single or double batch of pasta. Since I have a family of five with two growing boys, I opted to make the double batch. 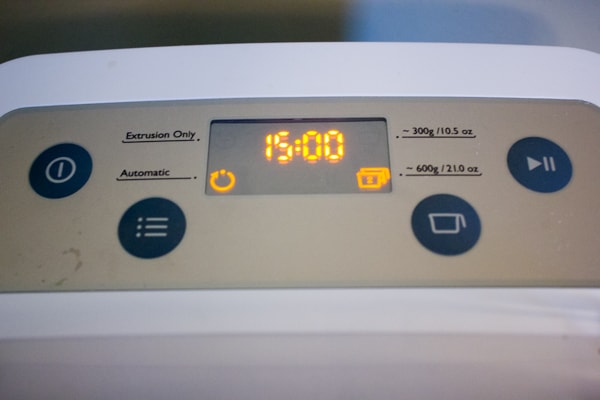 The control panel is simple to read and use. To get things started, I pressed the power button, then I pressed the scoop button so the display showed the 2 scoops lit. This indicates that the machine would run the double batch mode. Then I pressed the play button to start the operation. 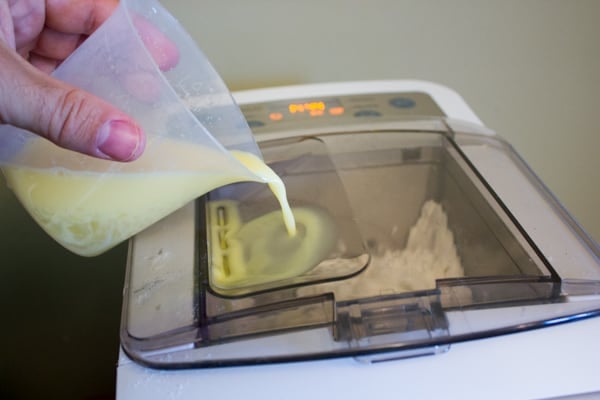 Immediately, the kneading paddles started turning. The recipe book has both an egg pasta recipe and a non-egg pasta. I went the egg pasta route and gently mixed a couple eggs with some water in the measured water cup that was also included with the machine. I slowly poured the egg mixture through the slot in the lid of the machine. As the paddles kept turning, the flour started to clump to look like a dry crumbly dough. Over time, it resembled more of a biscuit dough. 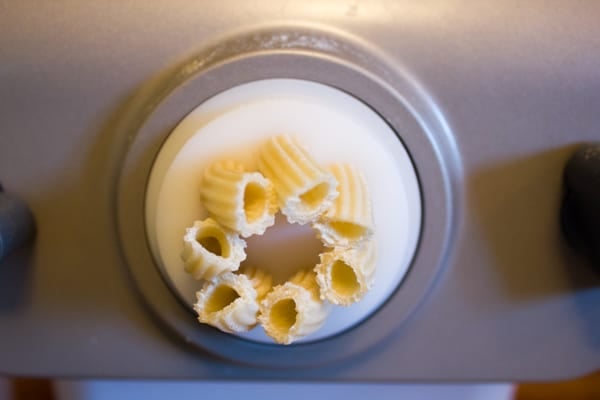 Within a few minutes, pasta started to be pushed out through the disc. It came out fairly slowly, but you need to stay nearby to cut the pasta to the desired length. 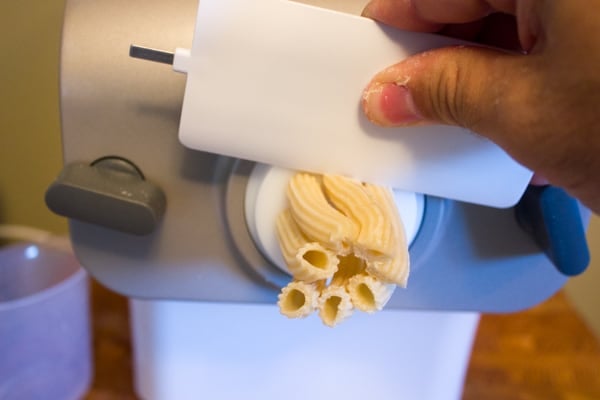 The machine also comes with a plastic cutting tool. For penne, I cut the pasta at about 1 1/2 inch lengths. To cut, just run the cutting tool down against the disc. The penne pasta was cut cleanly and the next 7 penne noodles started to come out of the disc.

Within minutes, there was a plate full of penne noodles! 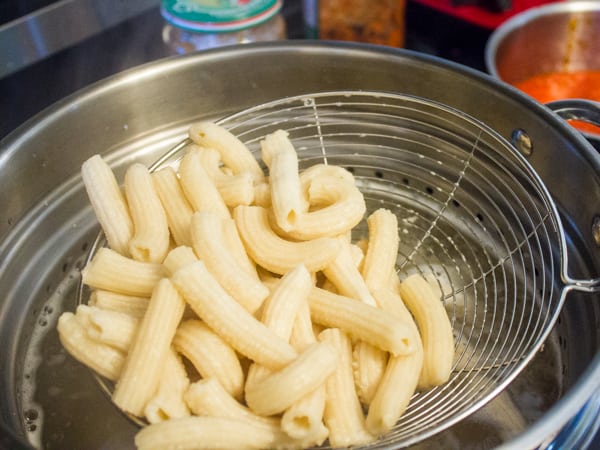 After bringing water to a boil, I dumped in a large handful of the fresh pasta. Fresh penne is a thicker pasta and took about 8-10 minutes to be at the perfect doneness. 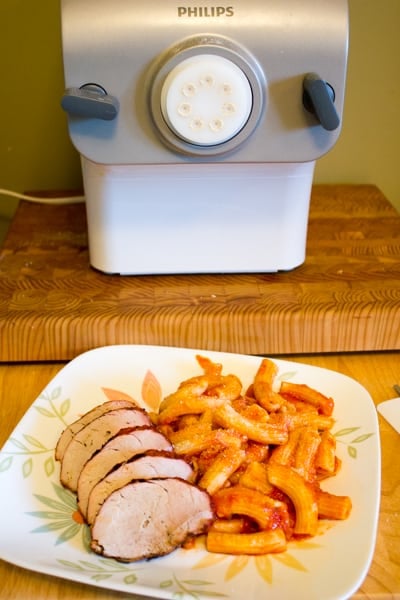 I tossed the pasta with some fresh marinara sauce I made, and served it alongside some sliced grilled pork tenderloin. The pasta was delicious and had a wonderful texture.

The Philips Pasta Maker is quite the impressive kitchen appliance. What impresses me more than anything is how quick it is to make homemade fresh pasta. Just dump in the ingredients and, within minutes, the pasta starts extruding and 15 minutes later there is a big batch that will feed the family. This machine has found a permanent place in my kitchen. Stored away in a cabinet under the counter, this pasta maker sits, ready to be used. Having such a prominent place in my kitchen is enough of a statement to how much I like this machine!

Disclaimer: Philips  provided me with the pasta maker. They did not pay me for this review and the views expressed above are my honest reactions after trying the product. This post contains affiliate links.