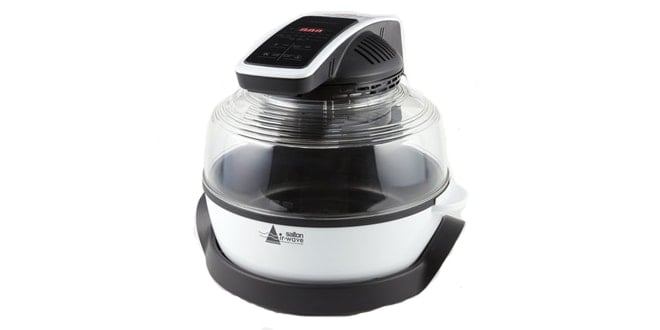 Cooks food fast and with far less energy than a traditional oven. The rotisserie works very well for fries or a whole chicken. More expensive than other halogen ovens, but most others do not have the rotisserie function.

Halogen ovens have been around for a while, but I rarely gave them much notice. Shopping channels and infomercials have sold them and there have been obscure shops and websites promoting their benefits, but it was not until I received the Salton Air Wave Health Cooker, that I both tried and grew to love the halogen cooktop.

Halogen ovens use, obviously, halogen elements to create intense heat. The infrared heat waves are circulated through an interior fan that creates a mini convection oven. Food in a halogen oven cooks in a fraction of the time and uses far less energy than a traditional oven. While these ovens have been unknown by many homeowners (I do not know anyone who owns any brand of halogen oven), they are really starting to grow in popularity.

I recently had the chance to try out the Salton Air Wave Health Cooker. This halogen oven has 1200 watts of power and has a temperature range of 195F to 400F. There is a digital readout and timer function on the control panel. The Air Wave also has a rotisserie function for cooking whole chickens, french fries in the tumble basket, and more. There are racks of different heights that can allow the cooking of various foods. 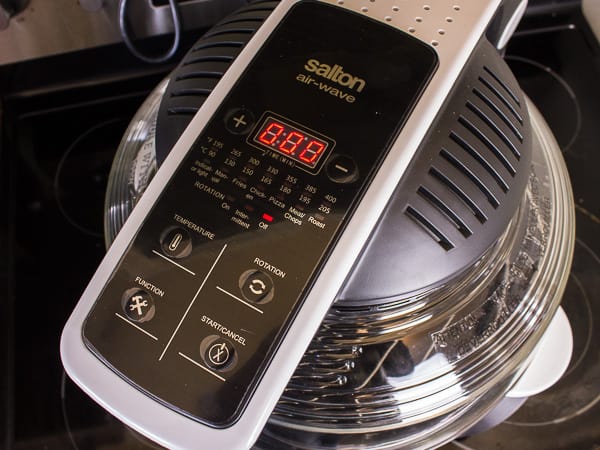 The largest part of the Air Wave is the lid and it is attached by a hinge on the arm at the back of the unit. The lid has the control panel, halogen heating element, fan and glass lid. There are many pre-set functions on the control panel for cooking chicken, fries, a roast and more. These pre-sets are selected by pressing the function button and include both the optimal temperature and time. It is also possible to set a custom time and select a specific temperature from the 7 choices in either Fahrenheit or Celsius.  Pressing the rotation buttons turns on or off the rotisserie function. 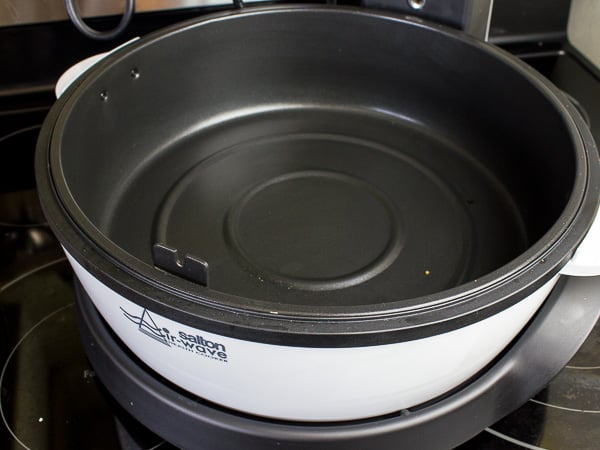 The base of the Air Wave has a removable non-stick bowl. The racks or pan rest in this bowl during the cooking process. It can be removed for easy cleaning. 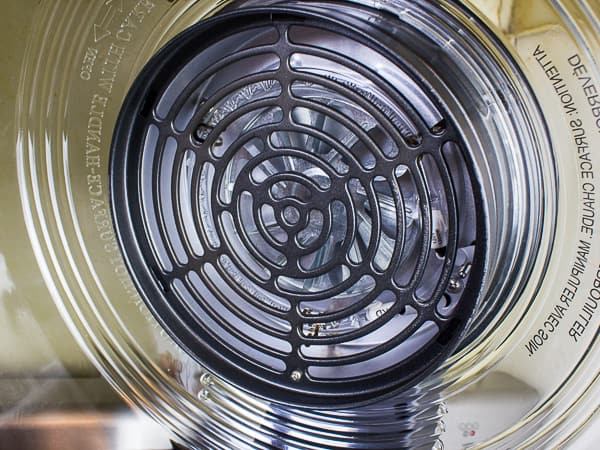 Lifting the lid on the swing arm reveals the halogen heating element and the fan. It may look small but this little element packs a lot of heat! 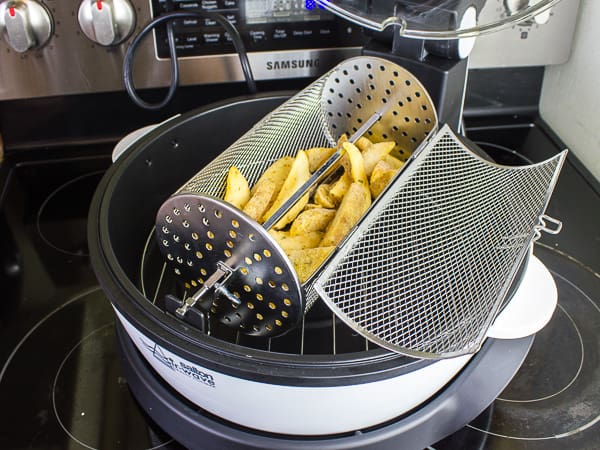 The rotisserie function really intrigued me more than anything else with the Air Wave. The unit comes with both a spit for chicken/roasts and a tumble basket. The Air Wave promotes itself as a great way make frozen fries.

I put the tumble basket in place and added some frozen potato wedges. 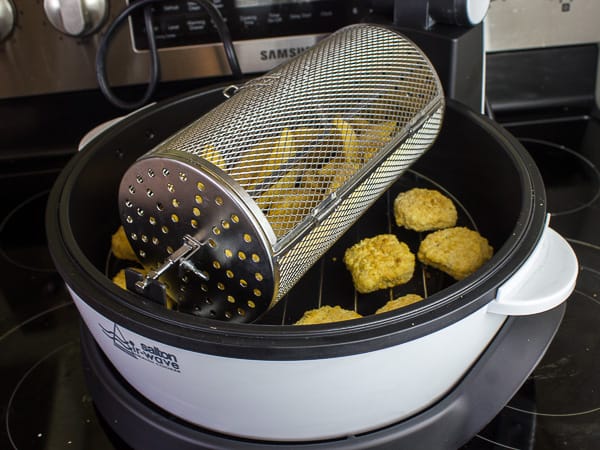 I closed the door on the basket and, as seen in the picture above, I placed the lower rack under the basket. On the rack I placed some frozen chicken nuggets.

Then I pressed the function button until the fries setting was illuminated. I turned on the rotisserie by pressing the rotation button and then pressed start. 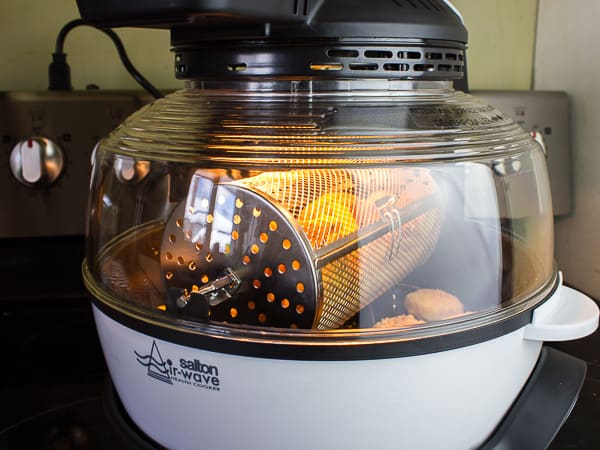 The halogen element turned on, immediately providing a glow of light. The tumble basket turned smoothly and the Air Wave heated up to 400F. The glass lid was naturally very hot to the touch, but the white plastic bowl was not near as hot. 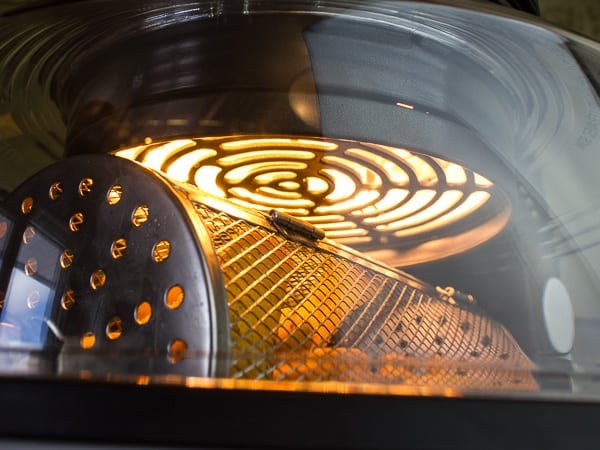 Taking a peek under the lid shows the halogen element fully illuminated. 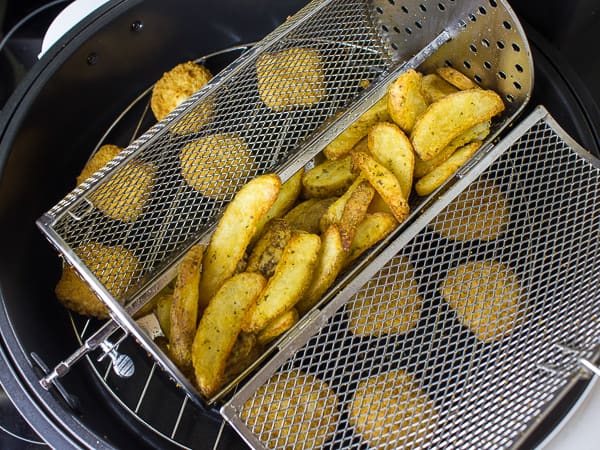 After the 35 minute cook cycle the Air Wave will beep and the light will go off. The chicken nuggets were crispy and perfectly cooked. The potato wedges were amazing and evenly crispy. They actually tasted better than when cooked on a baking sheet in the oven. 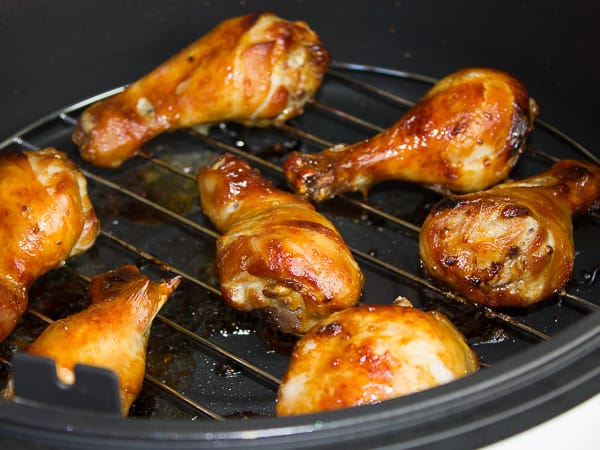 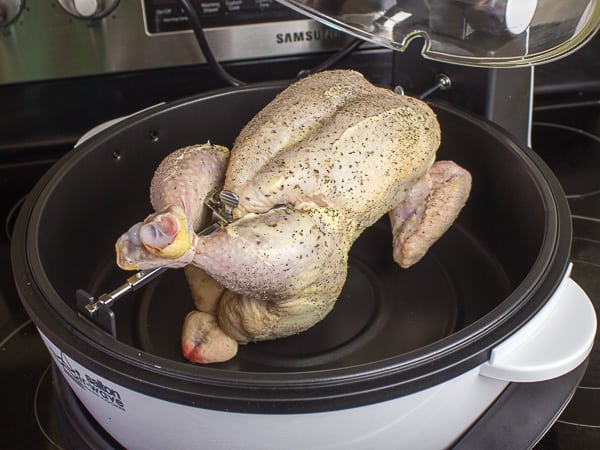 Of all the food I wanted to try in the Air Wave, it was a whole rotisserie chicken that most excited me. I placed the chicken on the spit, and rubbed it with butter, herbs and spices. The chicken fit in perfectly and there was plenty of room for it to rotate on the spit. 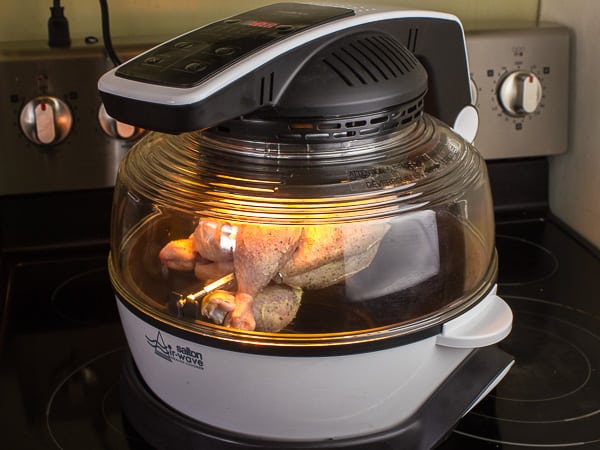 The Air Wave was set to the chicken function and heated up to 385F. This machine can cook a whole chicken in 30 minutes, which is far quicker than a traditional oven. The chicken rotated smoothly and before long, the butter started to melt and the skin began to render. 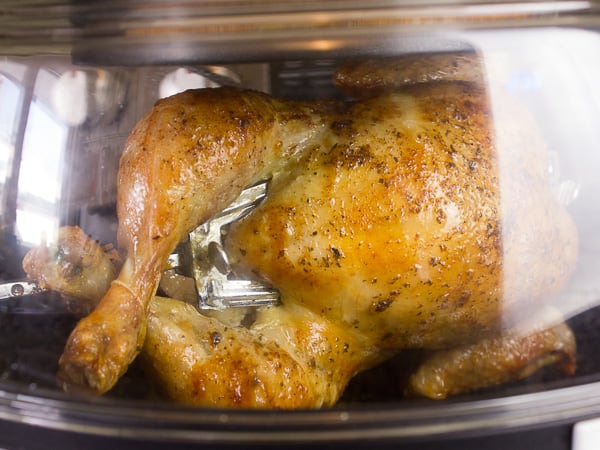 Above is a picture of the chicken after about 25 minutes of cooking.The smell was incredible. 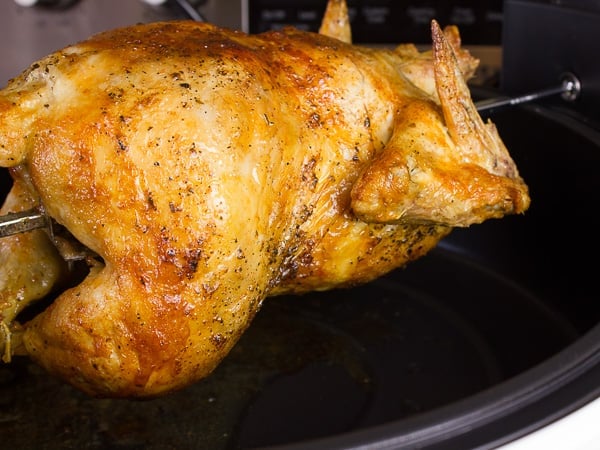 After the 30 minutes of cooking, I used my Thermapen to check the internal temperature of the chicken and it was fully cooked. The skin was crispy and all the spices stayed on. The rotisserie function allowed the chicken to baste itself while cooking. It was incredible and I will use the Air Wave to cook my chicken all the time now! 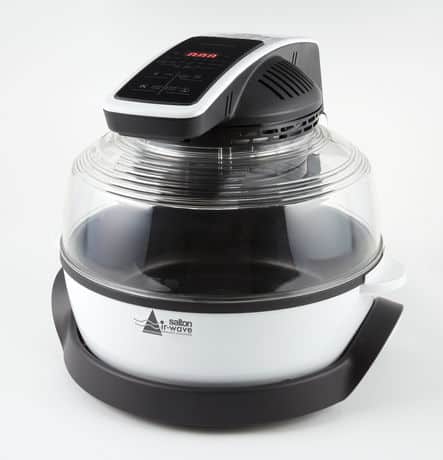 Being the first halogen oven I have ever used, I was quite impressed with the Air Wave, both in its functions and in the performance of halogen cooking. It cooks food very well, in a fraction of the time, and with far less energy than regular ovens. I can see why halogen ovens are growing in popularity. They are an effective way to cook food and are a great product to own, considering you have the space. The Air Wave is not small and will take up a lot of space on the counter or in a storage closet, when not in use.  The Salton Air Wave is also a little pricier than most other halogen ovens, set at a price tag of $200-250. While it is more than other halogen ovens, it is one of the only ones that has the rotisserie function or a digital display.  For me, the rotisserie function alone makes it worth the higher price.

Pick this up at Amazon – Salton Air Wave Health Cooker

– It is also available at these other retailers: Kitchen Stuff Plus, Sears, Personal Edge, Centre du Rasoir, Boutik Electric and Ares Equipment.

Disclaimer: Salton provided me with the Air Wave Health Cooker. They did not pay me for this product review and the views expressed above are my honest reactions after trying the product.

Get Ready for Super Bowl!