Oven baked ‘smashed’ potatoes topped with crumbled bacon, cheddar cheese and green onions. Crispy on the ouside and fluffy in the middle! 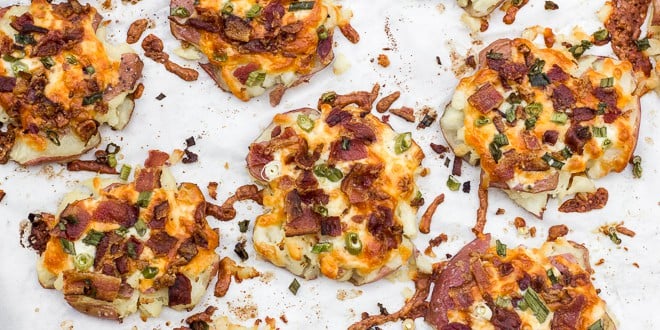 Have you ever tried smashed potatoes before? These are something that has been on my ‘to make’ list for months and I finally tried it. Now, this bacon and cheddar smashed potato recipe is a new favourite!

I don’t know why it took so long, but I will tell you plainly that it will not take me this long till I make them again!

Smashed potatoes are very simple to make. First, you boil the potatoes until they are tender when poked with a fork or knife. Let the potatoes cool and place them on a baking sheet. To smash them, I used a wide BBQ spatula and pressed down till they were about 1/2 inch thick. You could also use a fork, potato masher or any metal spatula.

Once the potatoes are flattened they could be topped with so many different things. This recipe used crumbled bacon, grated cheddar and sliced green onions and it was AMAZING! I put them in a 400F oven until the cheese was melted and you could see the potatoes starting to brown around the edges – that took about 20 minutes. 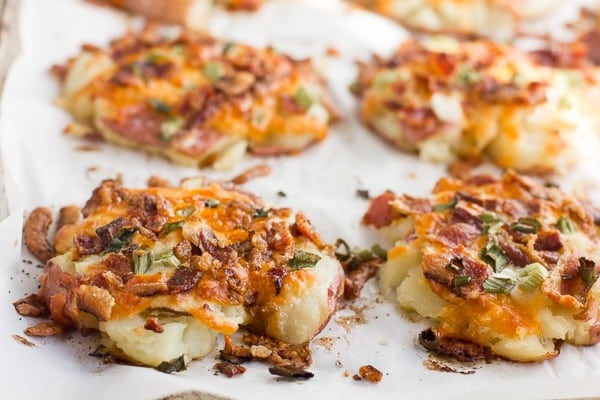 While it is not necessary, I roasted these in the oven on parchment paper. The great thing about parchment paper is that the potatoes do not stick to the baking sheet. Also, I love to top them with lots of grated cheddar and if they fall off to the side of the potatoes all those crisp bits come off easily. Those crispy baked cheese pieces are oh so tasty!!! 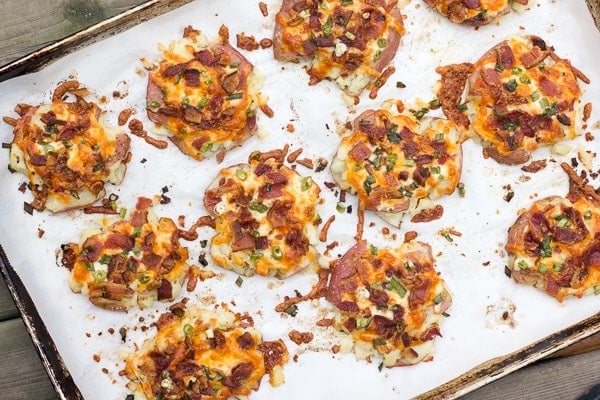