These bacon and cheddar potato skins are a great appetizer for game day, parties or just because there are times you want something this good! 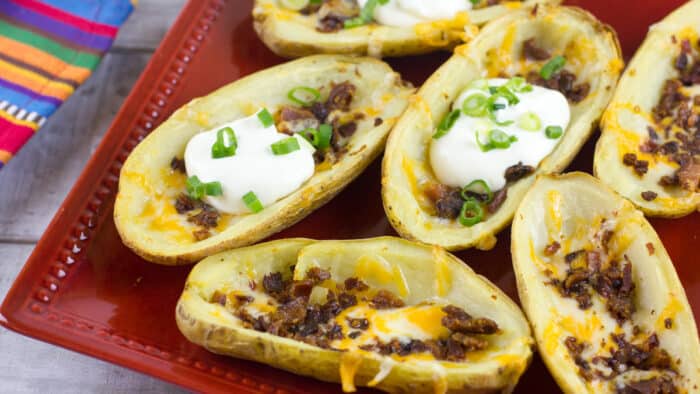 Loaded potato skins are a classic appetizer, found on sampler platters at many restaurants! I have even bought frozen remade ones that just need to be reheated in the oven. But, once I tried making them and discovered how easy they are to prepare, I love making them at home.

These bacon and cheddar potato skins are perfect for any game day party. If you are having people over for a party or gathering, a platter of these loaded potato skins are sure to be a crowd pleaser. Make sure that you have a bowl of sour cream and some sliced green onions on the side, so people can top the potato skins with them if they wish. 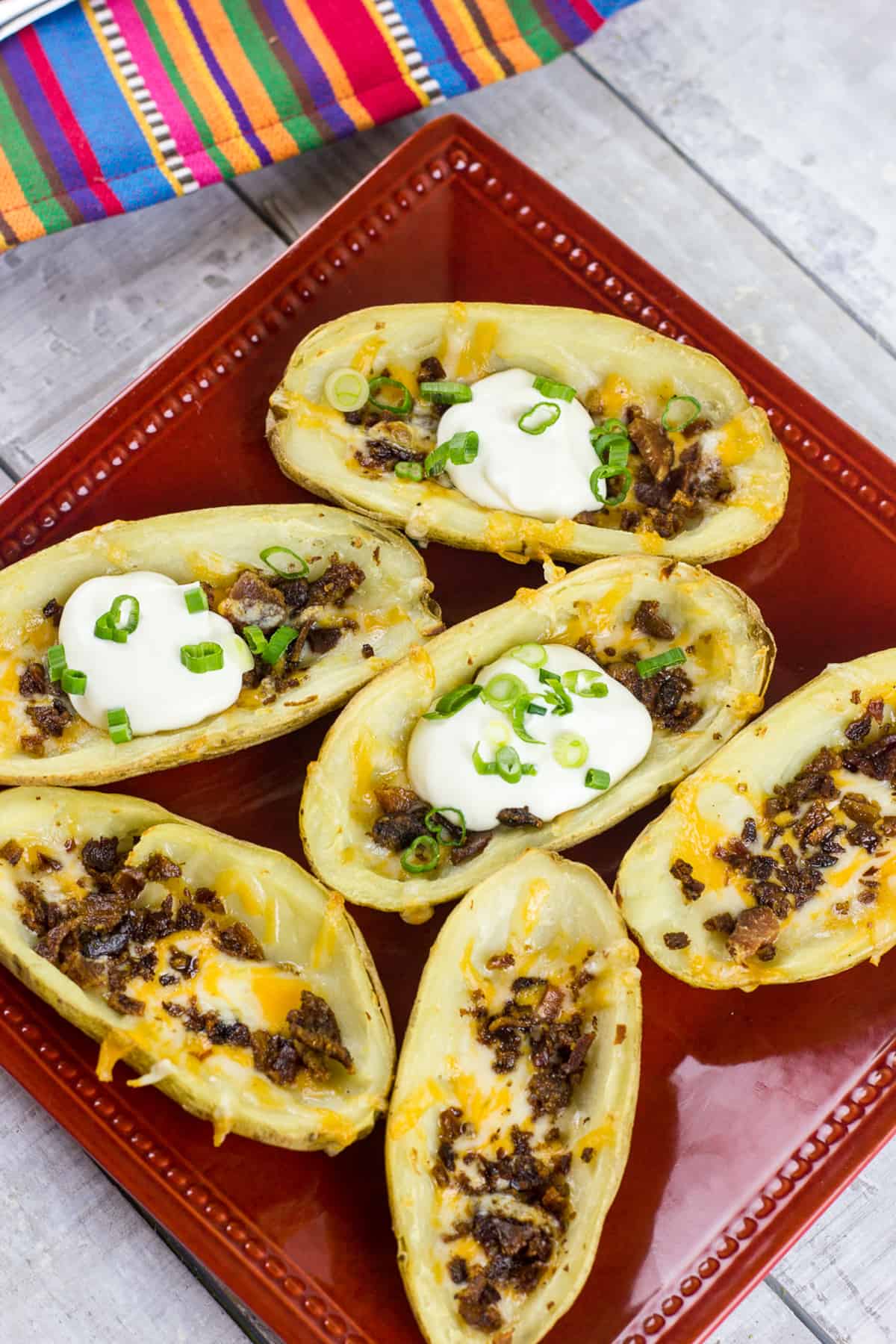 Can You Prep These Potato Skins Ahead?

These potato skins are an excellent ‘make ahead’ appetizer. Do steps 1 to 5 in the recipe, the day before the party or when you need them. This gets the potatoes, baked, halved, hollowed out and then baked a bit more. Once that is all done, wrap them up and store them in the fridge.

Then on game day, all you need to do is add the toppings to the potato skins and bake them until they are heated and the cheese is melted. All that prep the day before means that you have very little work to do when everyone is over. 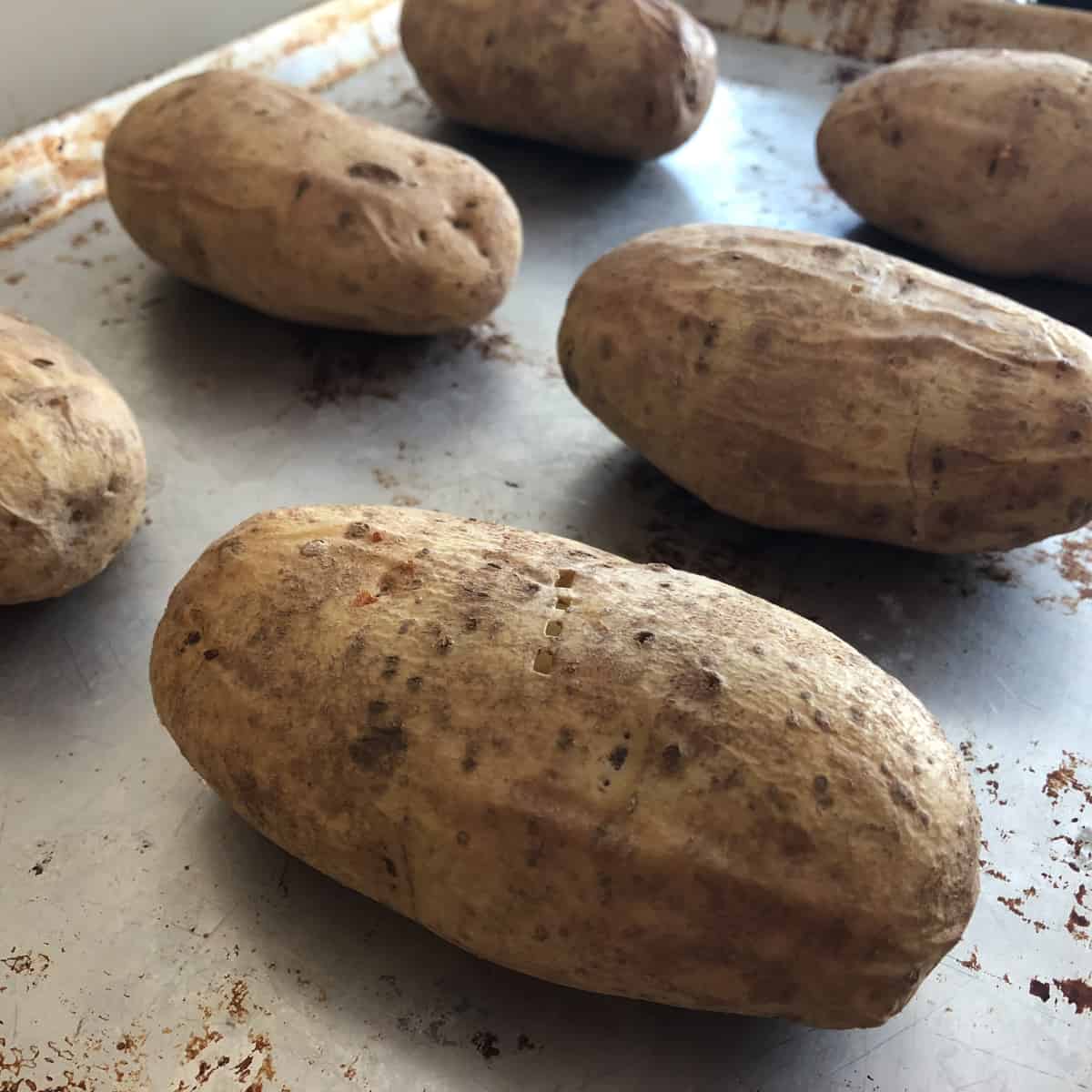 How Long to Bake Russet Potatoes

I find that russets are the best potatoes for baking. Not only do they bake very well, they also have the perfect shape for these potato skins, being long and wide. They are ideal for holding plenty of toppings on them once halved and hollowed out!

Baking potatoes is super simple. Preheat the oven to 375F. Place the potatoes on a baking sheet and bake for 60-75 minutes. After this time, stick a fork or sharp knife in them to test for doneness. You should be able to stick the fork in with little resistance. If the potato still seems too firm, you may need to cook it a little longer. 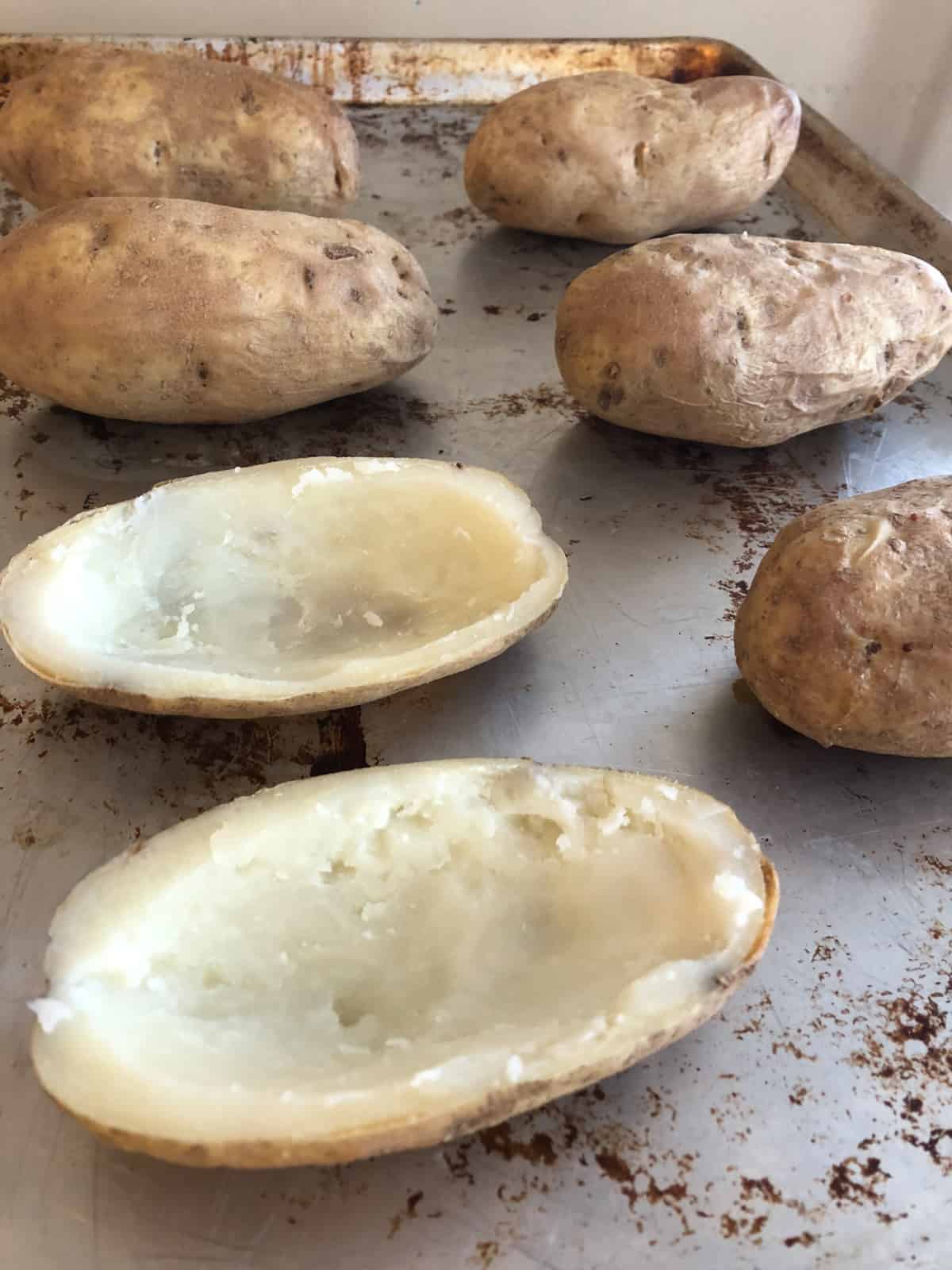 How to Prepare the Potatoes for Toppings

Once the potatoes have cooked through, take them out of the oven to cool to room temperature. Slice the potatoes in half, lengthwise. Use a spoon to scoop out a bunch of the potato flesh. Try not to scoop too much potato because a good potato skin still should have plenty of potato. I am to leave around a 1/2 inch of potato with the skin.

Increase the oven temperature to 400F. Bake the potato halves for 15 minutes. 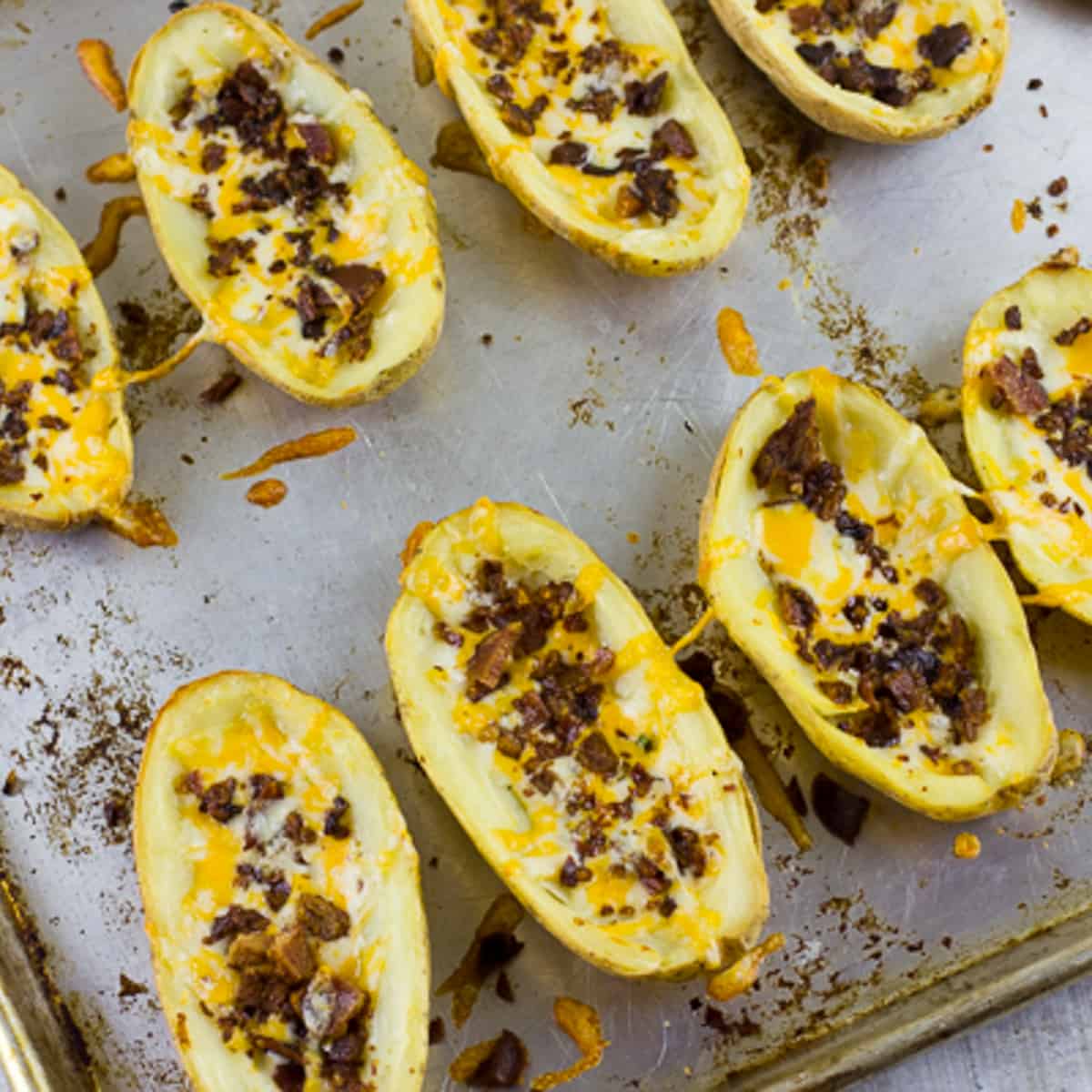 Take the potato halves out of the oven and sprinkle some of the grated cheddar and crumbled bacon in the shallow hollowed out part of each potato half.

Place them back in the oven and bake another 15 minutes, or until the cheese is melted. 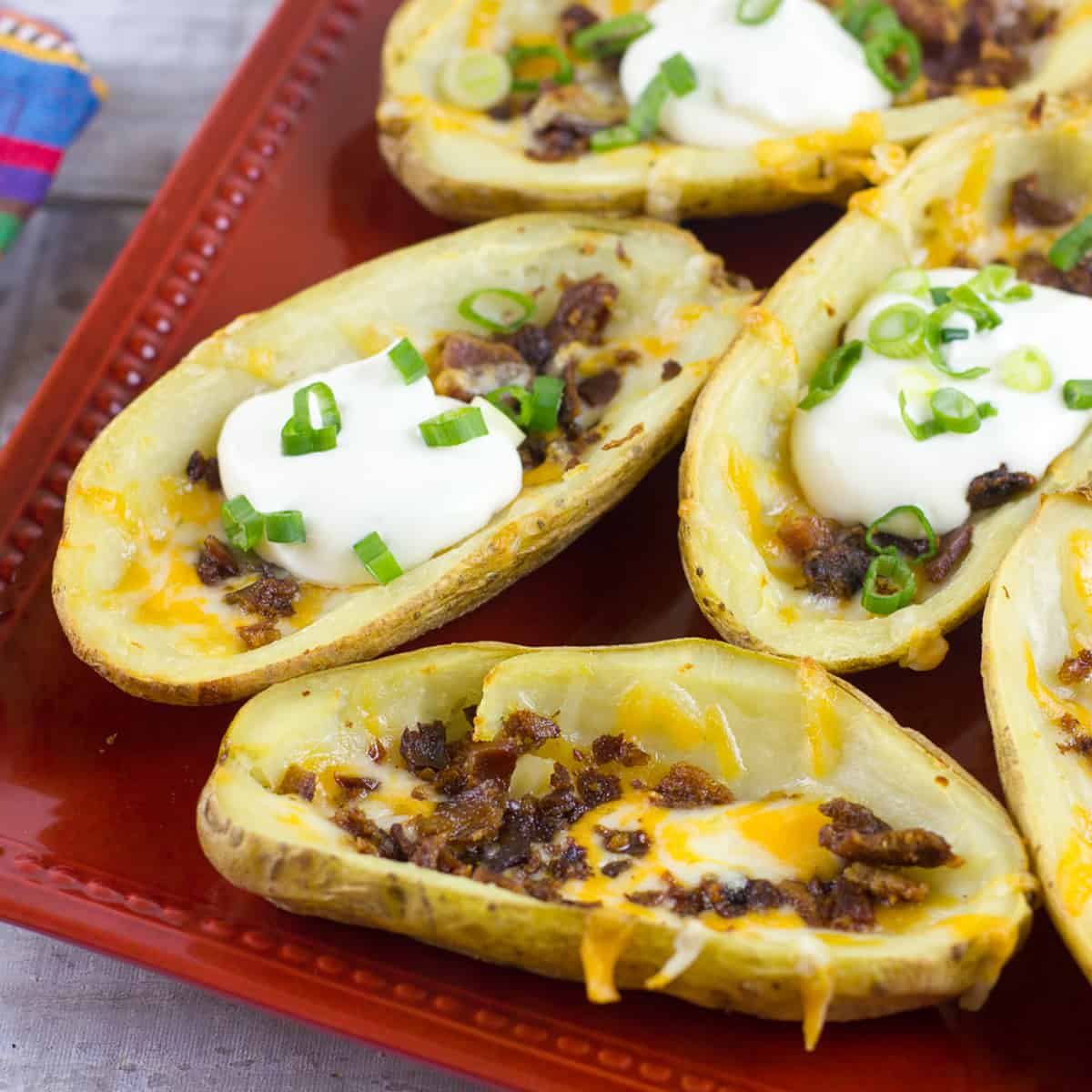 Bacon and Cheddar Potato skins are best served hot and right out of the oven. If desired, spoon a dollop of sour cream on the potato skins and garnish with some sliced green onions.

These are the classic type of potato skins and the kind that are in the appetizer section of many restaurant menus. But, there is no reason that you could not get creative and top the potato skins with different combinations. Here are a few ideas: 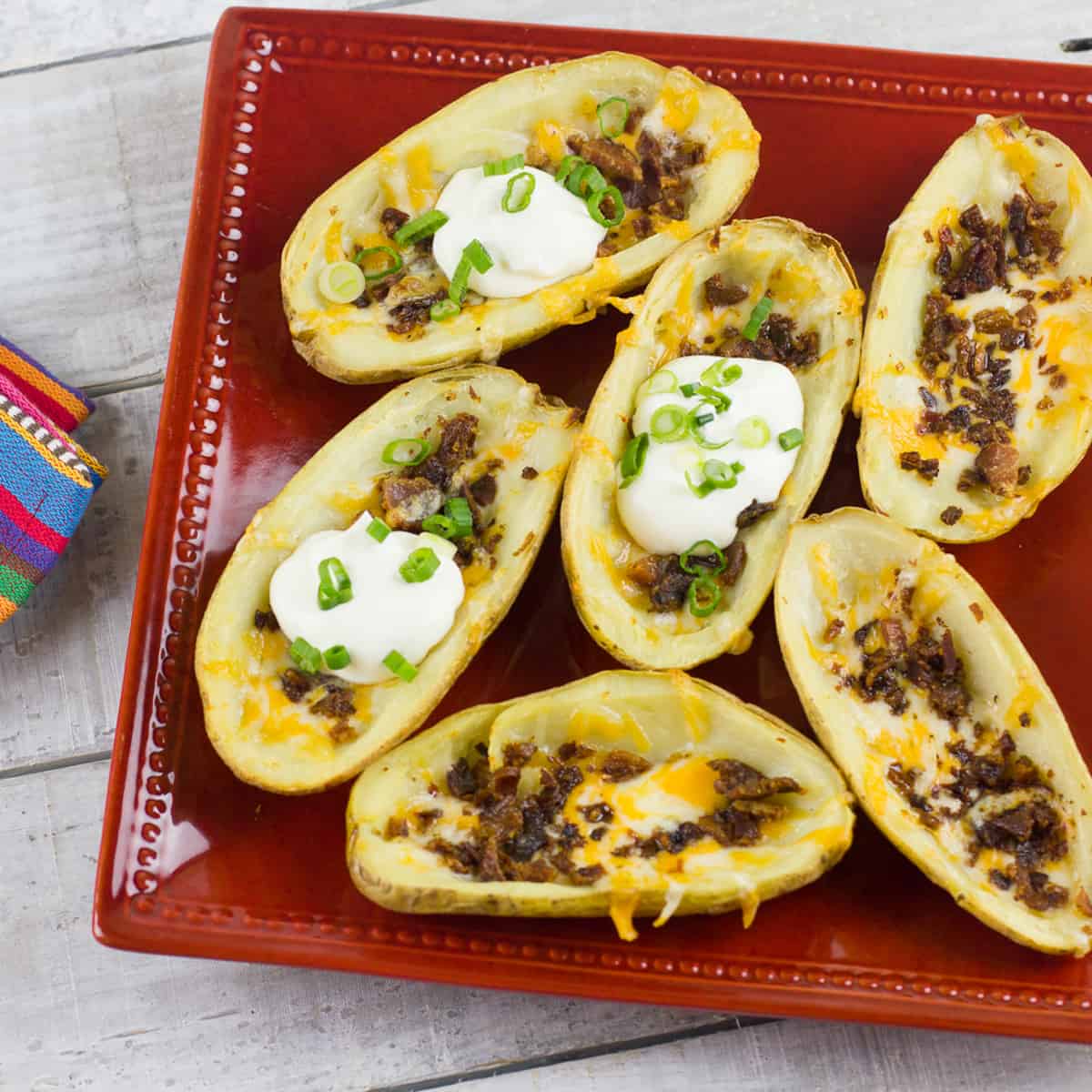