A tradition of Central New York state that comes from the salt springs around Syracuse. BBQ Classic and served with melted butter and chopped chives.

I love learning about regional culinary dishes that I have never heard of and these Syracuse Salt Potatoes are just one of those recipes. I live in Canada and am continually amazed at the many different food traditions from various regions of the United States.

Here are just a few:

This just barely scratches the surface. This past week I learned of a new regional food that is still American but close to where I live. This dish, or should I say cooking technique, is called Syracuse Salt Potatoes. Have you ever heard of these? Well, let me give you a bit of a lesson on them.

Salt springs are found around the city of Syracuse and have been used to produce consumable salt that was distributed for decades from the 1800s until around 1920. In the 1800’s, Irish salt miners would come to the springs and bring a bag of potatoes. At lunch time they would boil the potatoes in the brine from the salt springs. This became a popular way to eat potatoes and, to this day, in Central New York state, people still love to eat salt potatoes.

Some restaurants in the area serve salt potatoes. Also, in grocery stores, you can buy salt potato kits. The potatoes need to be kept whole, so smaller new potatoes are the typical kind prepared with this technique. If the potatoes are cut, too much salt will be absorbed in the potato and it will be virtually inedible. 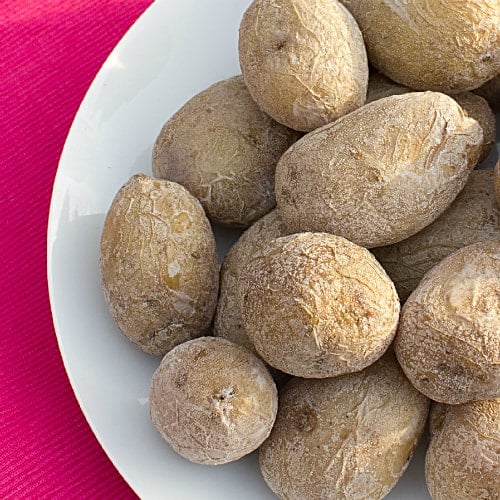 Once the potatoes come out of the salt brine, they form a dry salty crust on the skin. The salt also raises the boiling point of water which helps to create an extra creamy potato. It is also popular to serve the potatoes with melted butter and chopped herbs, such as chives. Much of this info comes from Wikipedia.

No ratings yet
Print
A tradition of Central New York state that comes from the salt springs around Syracuse. Irish salt miners cooked potatoes in the brine from the springs. BBQ Classic and served with melted butter and chopped chives.
Prep Time: 10 minutes
Cook Time: 30 minutes
Total Time: 40 minutes
Servings: 6