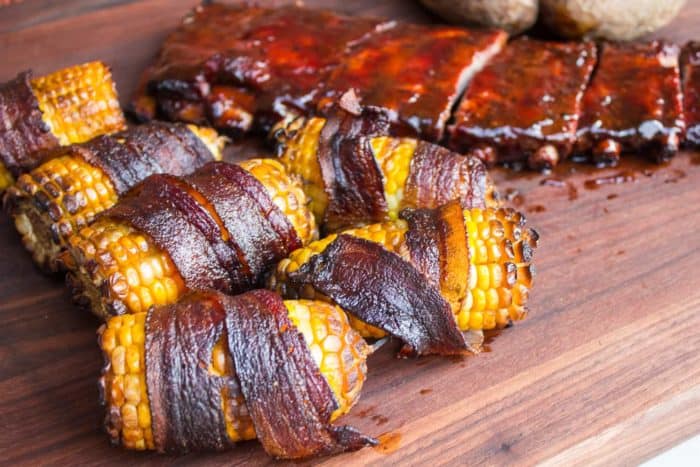 Over the years I have enjoyed smoking vegetables. Sure meat is in my smoker more than anything else, but there are times that I smoke some vegetables and have had some tasty results!

Smoked tomatoes are amazing and add a nice flavour to soup and even salsa. Smoke some onions and peppers and they enhance the flavour to so many different dishes from chili, to pasta sauces.

If you are looking for directions to smoke a number of different vegetables, check this out – How to Smoke Vegetables 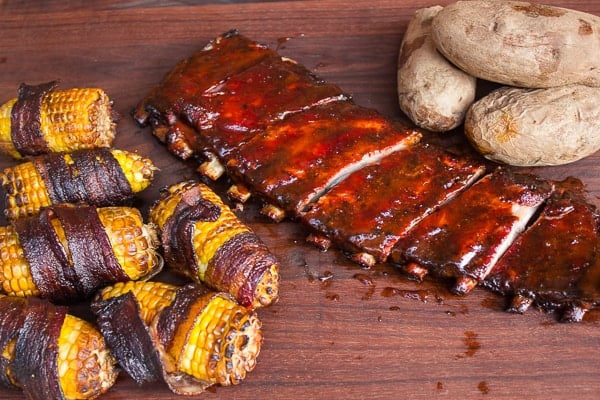 The idea of smoking corn was quite intriguing to me. I have grilled corn many times, but in those instances, I keep them in their husks. The husks almost steam the corn and they prevent the kernels from drying out and getting tough from the hot grill.

Keeping the husks on the corn in the smoker would defeat the purpose of smoking them. The husks would prevent the smoke from penetrating the corn and providing the smoky flavour.

But, leaving the corn exposed in the smoker was probably not the best option either. I was worried that they might dry out and dried out corn kernels can be tough, so I wanted to find a way to keep the kernels tender, but allow them to be infused by the smoke.

To solve this, I wrapped the corn in bacon. Oh ya! 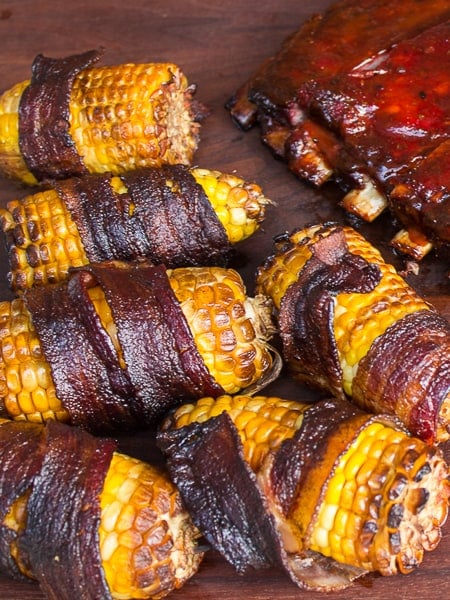 The bacon surrounding the corn provided a couple of different benefits. The kernels stayed moist and tender under the bacon and were just delicious.

Bacon added an outstanding flavour to the corn. On top of that, the bacon was rendered and crispy.

Everything is better with bacon!

I cut the cobs of corn in half and wrapped one slice of bacon around each portion of corn. I smoked the corn at 275F for about 1 1/2 hours.

The corn should be cooked and tender and the bacon crispy. Smoke a little longer if the bacon is not yet crispy. Under the bacon, the kernels should tender and perfectly cooked. There will be some corn kernels on the edges that are exposed. They will likely be a little charred with a smoky roasted flavour. So very delicious! 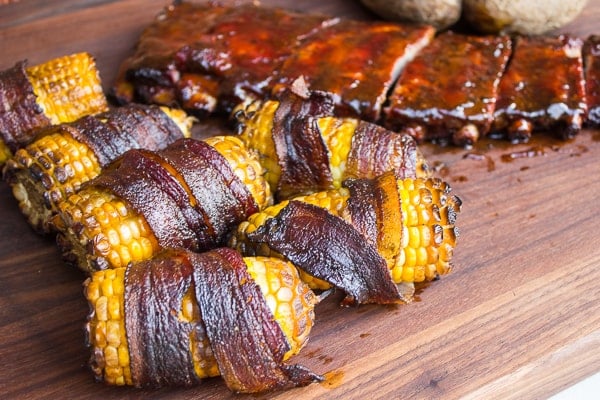 These smoked cobs of corn are perfect as a side dish for ribs, chicken, and so many other BBQ dishes. If you are looking for some meat to go along with this corn, check out these recipes!

Any of these dishes are perfect alongside these smoked cobs of corn. Add some Syracuse Salt Potatoes, and you have an incredible meal!

Smoked Corn on the Cob Wrapped in Bacon

5 out of 5
2 reviews
Print
How to smoke corn on the cob wrapped in bacon! Smoking corn for tender and smoky kernels! This recipe is the perfect side dish for ribs, chicken, brisket and more!
Prep Time: 10 minutes
Cook Time: 1 hour 30 minutes
Total Time: 1 hour 40 minutes
Servings: 12