Chili peppers are known and used in culinary cuisines all over the world. They originated in the Americas but after the Columbian Exchange they became globally available. They range in flavour, colour and heat. Some are mild and bright in flavour and others are scorching in the heat that they deliver. 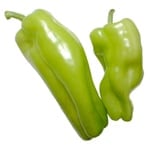 Description: The cubanelle pepper is a variety of sweet bell peppers but has a thinner and more rinkled skin. It is used extensively in Peurto Rican cuisine and is common in the United States. 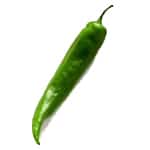 Description: A mild chili pepper. The name “Anaheim” derives from a farmer named Emilio Ortega who brought the seeds to the Anaheim, California, area in the early 1900s. This pepper is used in many Mexican and New Mexican dishes and can be used when a recipe calls for a New Mexican pepper. 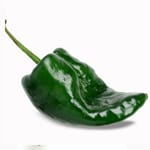 Description: A Large pepper that goes purplish when ripe. They are spade shaed with a thick flesh and an earthy flavour.. They are often roasted and stuffed. Dried poblanos are called anchos and are used in mole sauce. Poblanos are popular in Mexican cuisine. 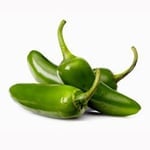 Description: The most commonly eaten pepper in the United States. Dark green, thick skinned and shaped like a bullet, this versatile chile is used in a variety of dishes including salsas, soups, salads and others. It is popular raw and cooked. When the jalapeno pepper is smoked and dried it is called a chipotle. Recipes using the jalapeno pepper. 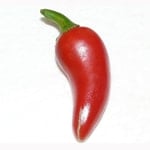 Description: Similar to the jalapeno, so much so that many times they are mistaken for a ripe jalapeno. They have a thinner skin that the jalapeno and can have a bit more heat. Fresno peppers are excellent in salsas, curries and marinades.

Description: This pepper is known for its waxy skin. It is yellow when it is picked to be eaten fresh but ripens to a deep red. The Hungarian wax pepper, when ripened, is allowed to dry and then ground into a powder to make paprika. Hungarian wax peppers can be stuffed, pickled or used in a variety of other ways.

Description: Narrow, thin and pointy, serranos are piercingly hot. Popular in Mexican food, particularly salsas, these peppers are used almost as much as jalapenos. Recipes using the serrano pepper. 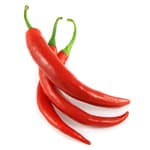 Description: Long, red and slender with a sharp piquant flavour. A favorite in Creole, African, and Asian cuisines, it is often dried and ground into powder or made into a hot sauce. Similar in flavour to the tabasco pepper. 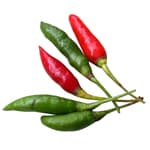 Description: Thin, pointy and green or red with needle-like heat penetration and a lingering afterburn. These peppers may look small but they pack a strong punch. Thai peppers are popular in Southeast Asian food including soups, stir-fries and sauces. 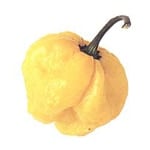 Description: At first glance these peppers appear to be sweet and bright, but do not be fooled by their appearance. These peppers are extremely hot and not recommended for people sensitive to heat. Native to Jamaica, the scotch bonnet is interchangeable with the habarnero because it is just as hot and colourful. Recipes using the Scotch bonnet pepper.

Description: Curvaceous, bright and shaped like a lantern with burning heat and a floral flavour habaneros come in orange, green, red and yellow. They are very popular and are now the ‘trendy’ pepper commercially grown across the United States. Used in many dishes such as soups, salads and in marinades. Habaneros are also used to make the hottest of hot sauces on the market. Recipes that use habanero peppers.

Description: Known as the hottest pepper in the world this pepper is more than 400 times hotter than the Tabasco pepper. It can be made into a paste or a powder and added to Indian, Middle Eastern and other cuisine to create a scorchingly hot dish.