The first weekend of football is over and there is already plenty to talk about. First and foremost…. TEBOW! The magic of Tim Tebow occured last night and the Denver Broncos win on an 80 yard pass on the first play of overtime. Crazy! The question is, can they beat New England next week even though they lost to them in the regular season. New Orleans looked just as strong as they did during the regular season and they will be a force to reckon with if any team wants to beat them. The Texans won and Foster had a great game. Yates started his first playoff game and won. I imagine he never thought at the beginning of the season he would be the starting quarterback in the second round of the playoffs! Another game this weekend was the Falcons and the Giants. I have been a Falcons fan for more than 20 years and it was beyond frustrating to see them get destroyed yesterday against the Giants. The big question for the Falcons now is what changes need to be made in the offense. They are 0-3 in the postseason during the Mike Smith and Matt Ryan era and there are clearly some issues that need fixing. The problem though, is that Arthur Blank likes his ‘boys’ too much and is rarely willing to do what needs to be done. The New York Giants win and now they go against last years Super Bowl champs to see if Eli can be clutch again!

So, this is day 1 of the 12 days of Superbowl snacks and today’s offering is one with some kick. I love jalapeno poppers and can usually eat a plate of them. Typically poppers are deep fried but the ones in this recipe are baked. The peppers are stuffed with a mixture of cheese and bacon and then topped with crumbled bacon. Everything is better with bacon, right? For those who do not like hot food I have also got an alternative to these jalapeno poppers. The cheese and bacon stuffing is just as good in mushroom caps as you can see from the pictures below. I made some of both the jalapeno poppers and mushroom caps this weekend and they were both a huge success!

To bake the jalapeno poppers you need to create a holder for them. I used an aluminum lasagna pan by cutting cross marks in the bottom part of the pan as seen in the picture above. 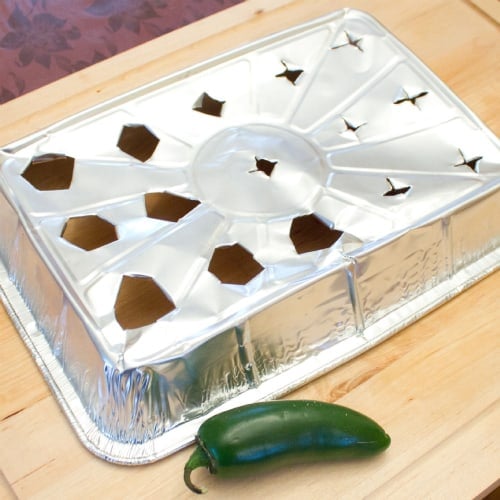 Fold the corners of the cut marks down to create holes large enough to hold the peppers upright while baking.

Core the peppers and stuff them with the cheese and bacon filling. Top with some extra bacon crumble and bake in the oven at 350F for 15-20 minutes.

If you do not like spicy food then pop the stem off a mushroom and stuff them with the cheese and bacon filling and top with more bacon crumble.

3 out of 5
2 reviews
Print
These bite size jalapeno poppers are stuffed with cheddar and bacon and baked to perfection. These are the perfect party food for the big game.
Prep Time: 15 minutes
Cook Time: 20 minutes
Total Time: 35 minutes
Servings: 6