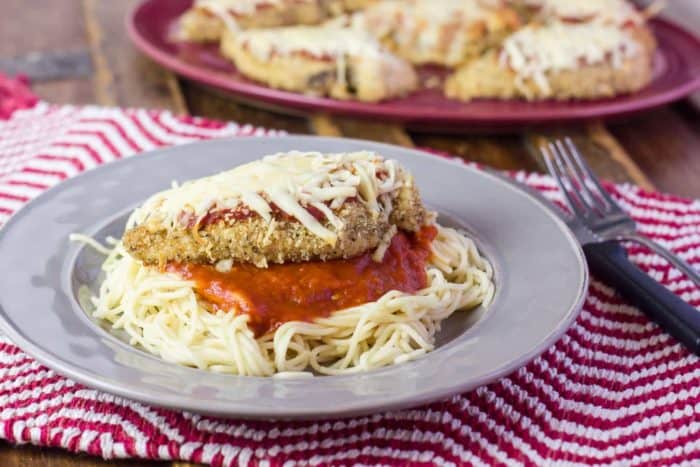 Chicken parmesan is a dish I have made for years but realized recently that I have never put it on the website. We love pasta dishes and have a number of them that are part of our dinner rotation. Chicken parmesan is definitely one of those meals. It is easy to prepare, quite tasty and a very healthy option, since I bake the chicken cutlets in the oven instead of panfrying them.

The chicken cutlets are lightly breaded and then baked in the oven. Once they are almost finished cooking, I add a little marinara sauce on top of each chicken cutlet and put some cheese on top as well.

Chicken parmesan can be served with so many things, but we usually plate it with some spaghetti noodles and extra marinara sauce. I have also served it with steamed vegetables and rice. There are so many options! 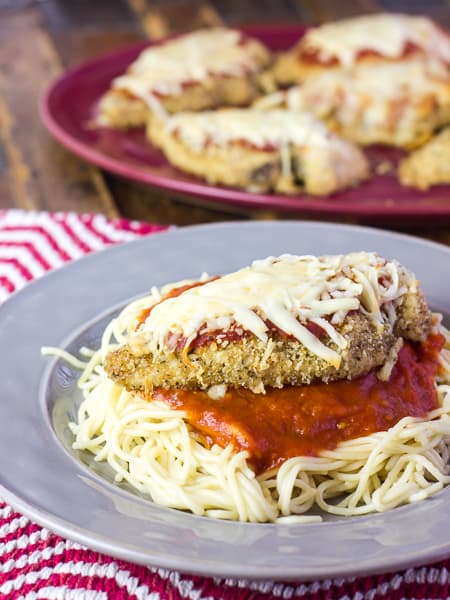 I always used to pan fry the breaded chicken cutlets, but lately I find that baking them in the oven is just as tasty and a much healthier option. Baked chicken parmesan is also very crispy and full of flavour.

Baking the chicken parmesan in the oven has a few more benefits than just being a healthier choice. Pan frying them usually requires that they be fried in batches since all the chicken will not fit in one pan, once they are cut into cutlets. But, if they are baked, the chicken easily fits on a baking sheet and you do not need to monitor them as much as if they are fried in a pan. Stick them in the oven and remove them once they reach the cooking time. So simple! 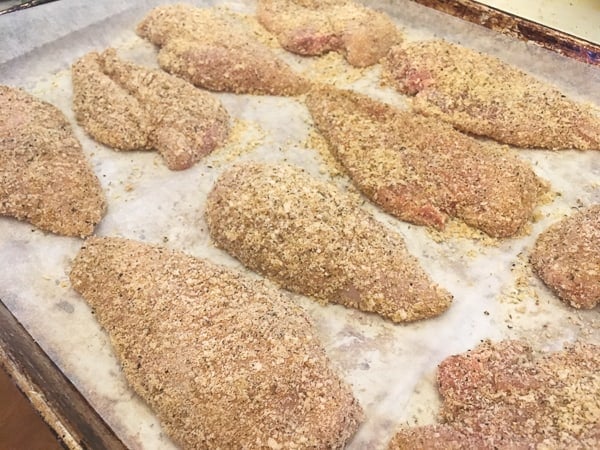 Chicken cutlets are essentially just boneless, skinless chicken breasts that have been sliced horizontally so you end up with two thinner pieces of chicken. You can then pound them to ensure they are an even thickness.

The cutlets are then brushed lightly with the oil. Then they are dredged in the breading mixture until evenly coated.

By brushing them in the oil, the breading adheres to the chicken better. Plus, I also find that the oil enhances the crispness and flavour of the breading.

Once breaded, lay the chicken on a baking sheet lined with parchment paper. 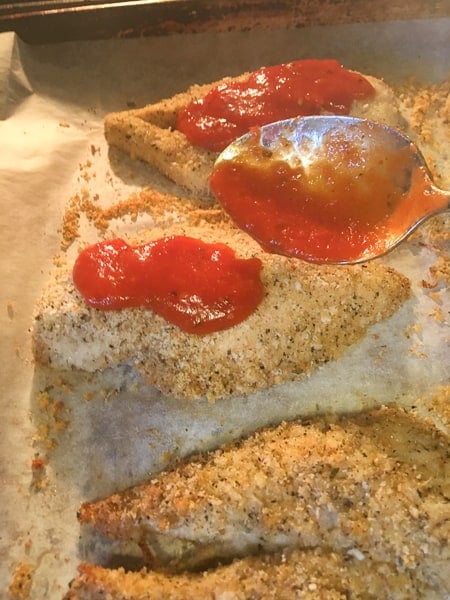 Place the chicken in a 400F oven and bake for 20 minutes.

After the 20 minutes, spoon a little of the marinara sauce on the top of each chicken cutlet. 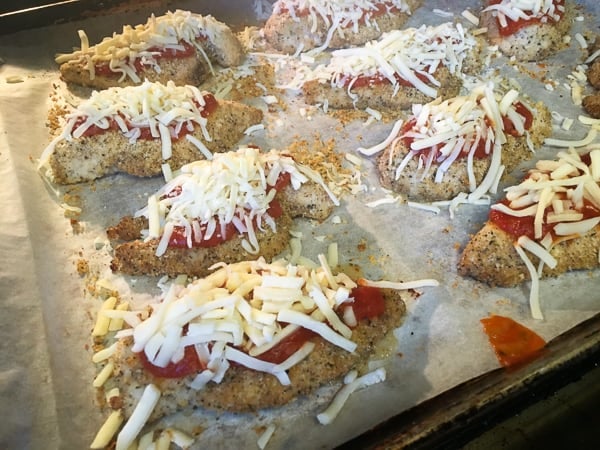 Then sprinkle a little bit of grated mozzarella cheese and parmesan on top. 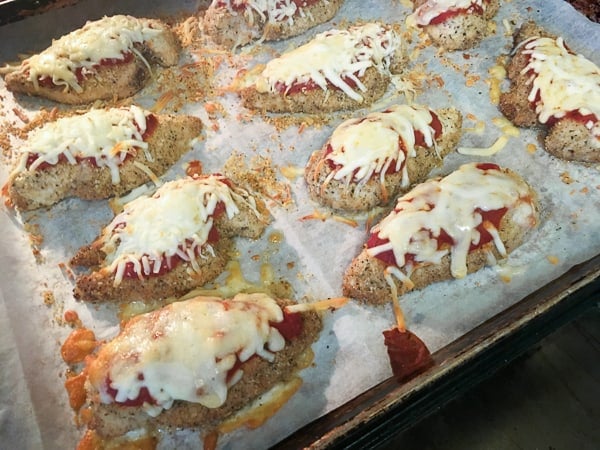 Place back in the oven and bake until the chicken is cooked through and reaches an internal temperature of 165F. This should take an additional 15 minutes or so in the oven. The cheese should be nicely melted as well. 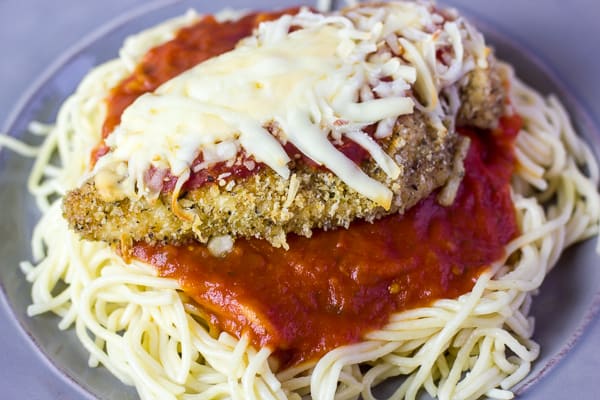 I serve the chicken parmesan on a bed of pasta with more marinara sauce. It is a simple and delicious meal, which does not take too long to prepare. This is a perfect weeknight meal and the whole meal should take no less than an hour to make, including all the prep. 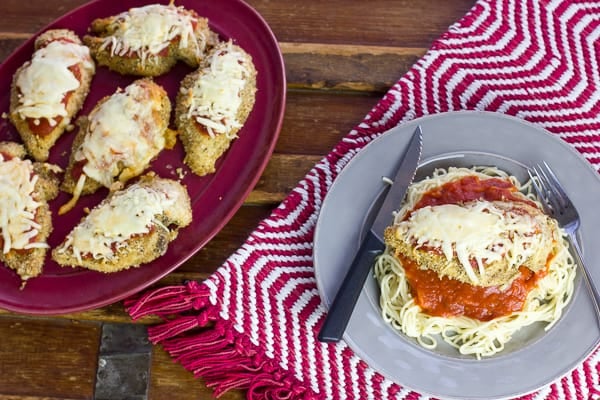 One of the added benefits of cutting the chicken breasts into cutlets is that I often find that the meat goes further. This recipe calls for 4 chicken breasts and while I say in the recipe that it serves 4, I actually find that it can serve more. Some people are content with one cutlet and full after that. Myself, I have a couple cutlets, which works out to one full breast. 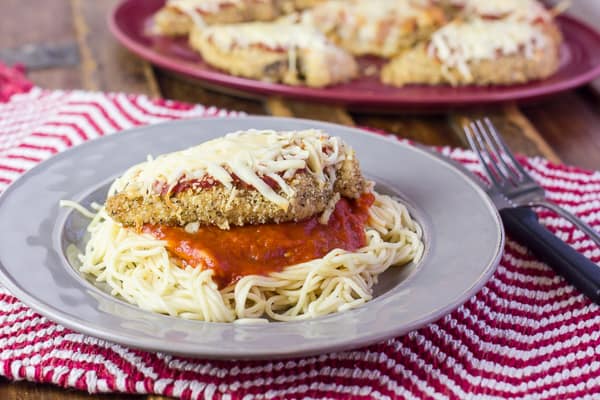 Get Ready for Super Bowl!