This savoury version of the popular monkey bread is similar to crawfish bread found at New Orleans Jazzfest. Each bite is stuffed with your choice of seafood, creole seasoning, and lots of cheese! 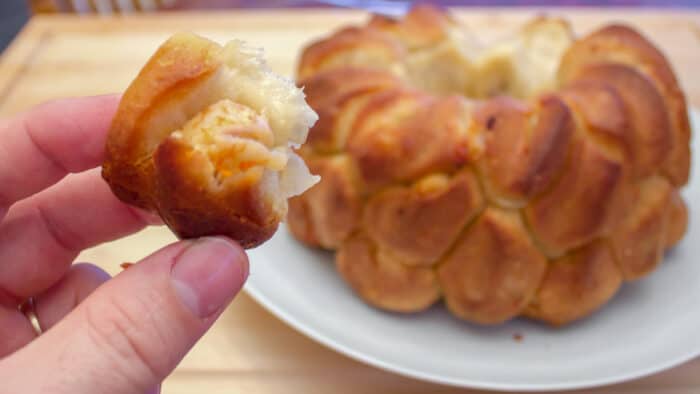 Monkey bread is a popular recipe that has been around for years. If you have never had monkey bread before, it is quite simple to make. You take homemade dough, or go the store bought route and get a couple tubes of Pillsbury country biscuits. Cut the biscuits in halves or quarters, roll them in a mixture of sugar and cinnamon and throw them in a bundt pan. Bake it and you have some sweet baked goodness! Today’s recipe takes the monkey bread concept and turns it into a savoury gameday food.

Many years ago, my family drove to Detroit to see a New Orleans Jazz Festival. The music was great and the atmosphere was a lot of fun. One thing about the day that I still remember was this crawfish bread that I bought. It was a hand sized bread, like a large empanada. It was stuffed with crawfish and gooey cheese. It was incredible and I still think about it! 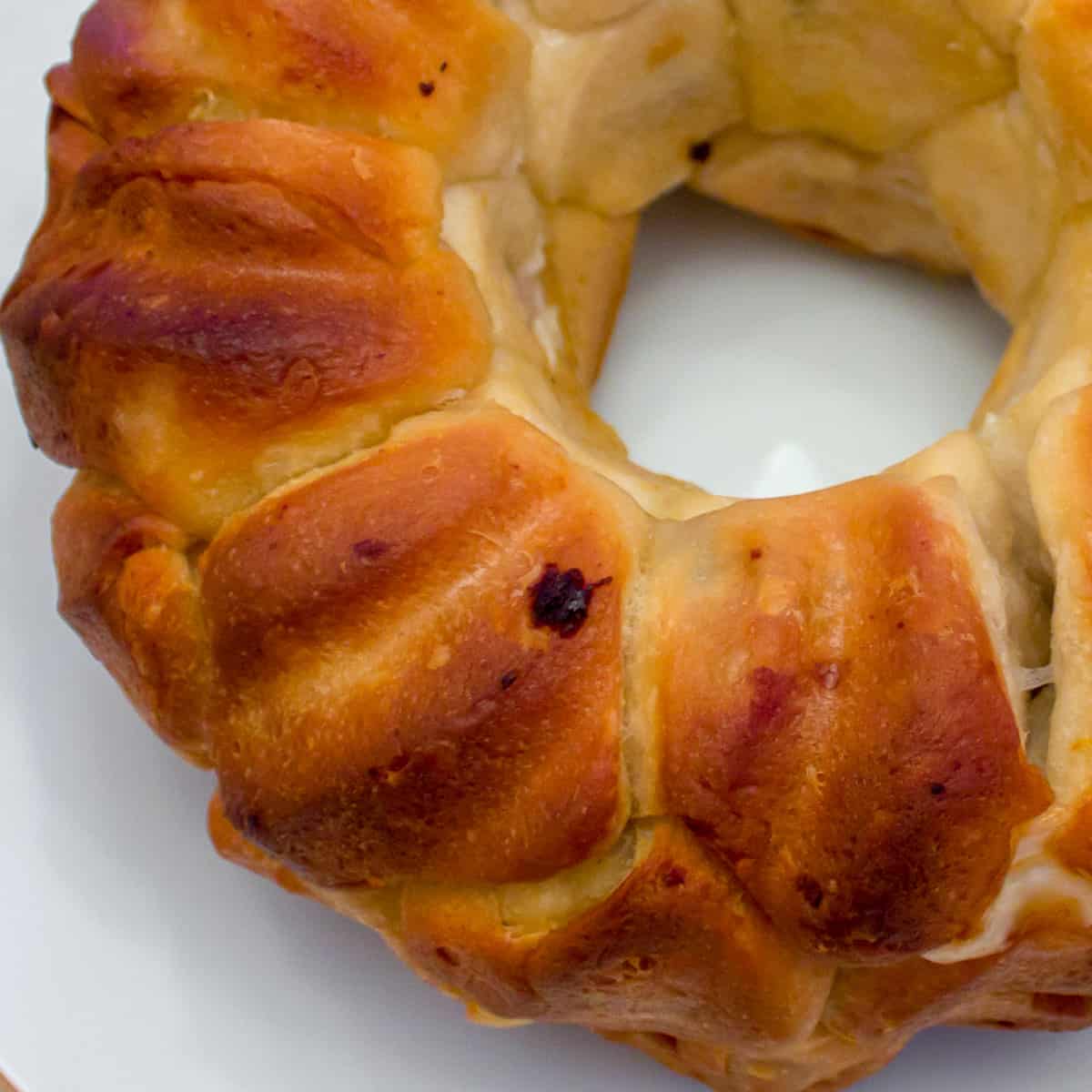 So, I thought it would be amazing if I could take what I remember about the crawfish bread from Jazzfest and merge it into monkey bread.

Monkey bread is so good and I already have a dessert version: Praline Monkey Bread. 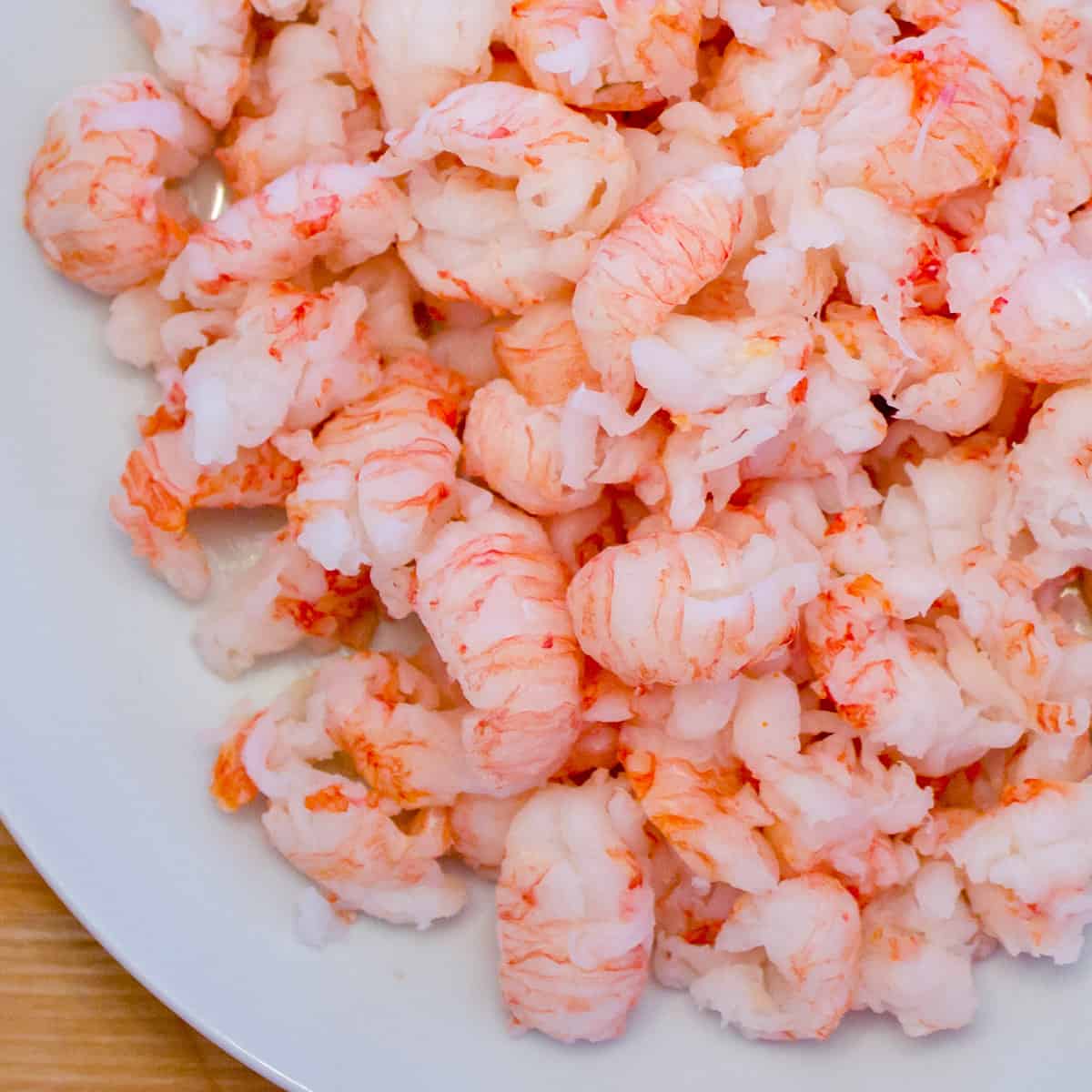 I wanted to find crawfish for this dish, but crawfish is difficult to find in Canada. I went to a local fish and seafood market that sells bricks of frozen crawfish meat occasionally.

Unfortunately, they did not have any in stock. Instead, I bought a brick of langostino meat. Langostino is a crustacean caught off the coast of Chile. They look similar in size to crawfish. I thought that this could work perfectly for this savoury monkey bread. 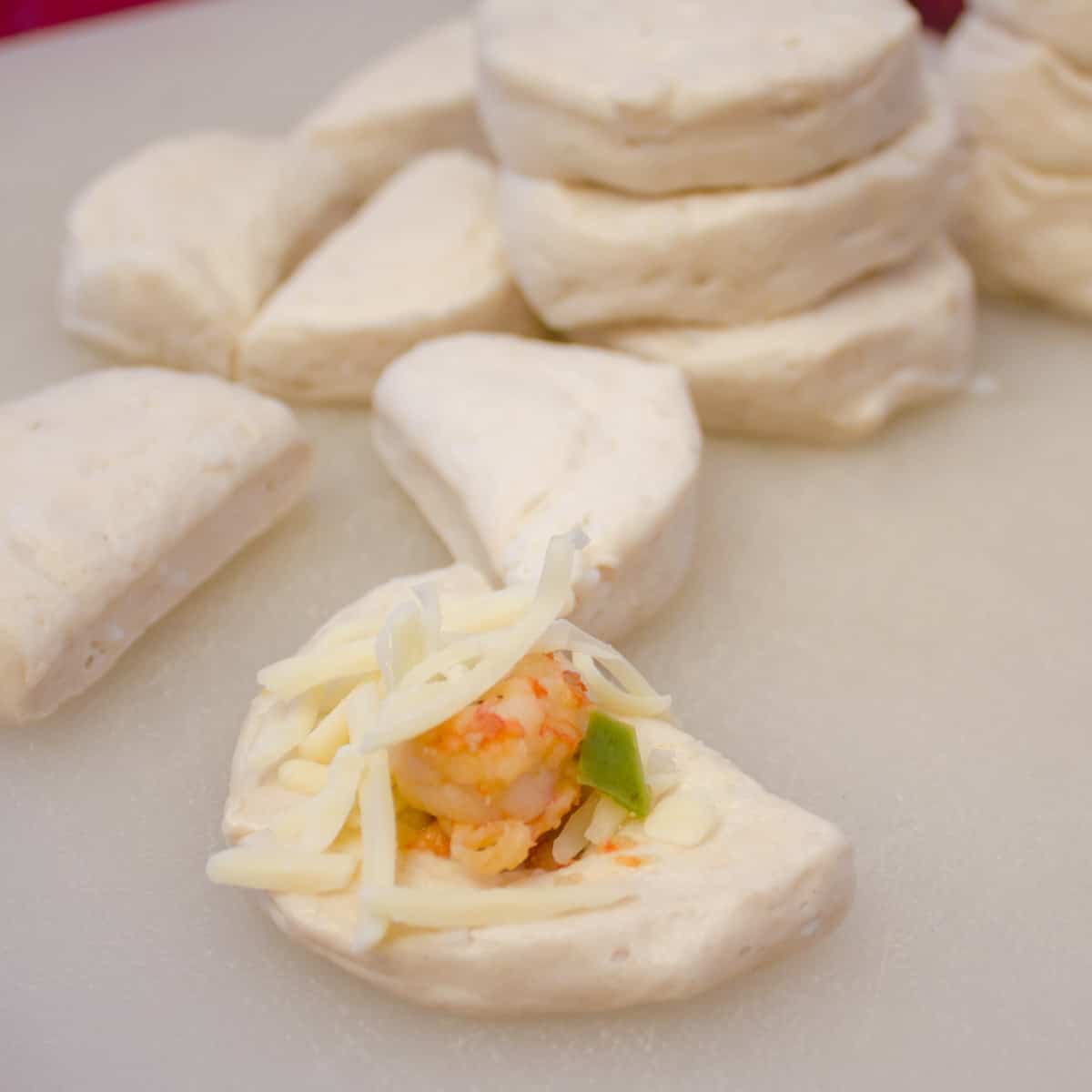 I sauteed the langostino meat with butter, minced onion, pepper and a little creole seasoning. Each little ball of dough is stuffed with some of the langostino mixture and mozzarella cheese. They are then brushed with melted garlic butter and placed in the bundt pan. The stuffed monkey bread baked perfectly and it tasted delicious. In the end, it wasn’t crawfish, but it was awesome. I imagine these little monkey bread bites could be stuffed many types of seafood: crawfish, shrimp, langostino, lobster, crab.

I used langostino, but almost any seafood could work. Make sure they are small enough pieces so you can seal the edges of the dough. Do not overstuff it with filling. 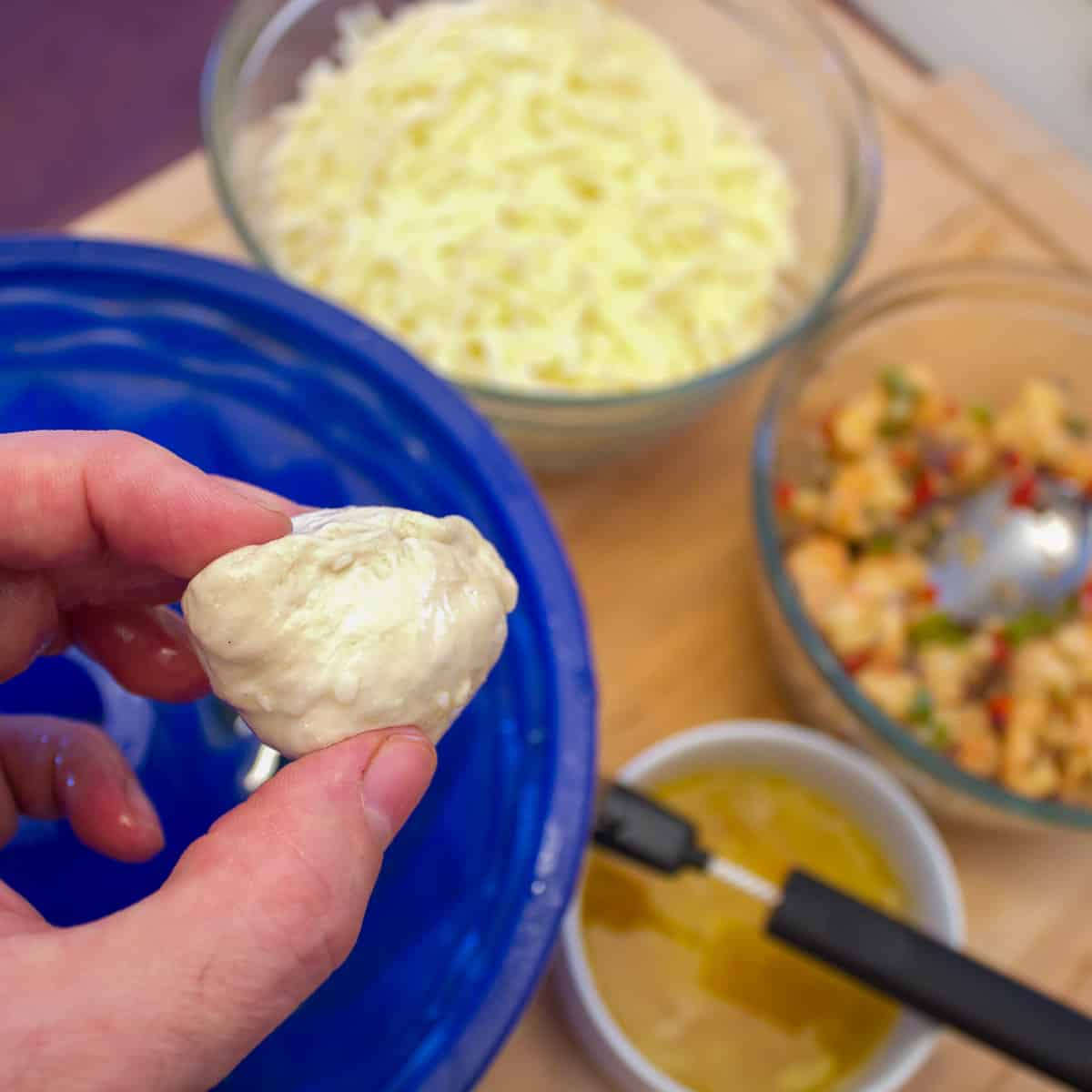 Make sure you brush the bundt pan and each ball of dough with melted butter. That way they can pull apart easily after they are baked. 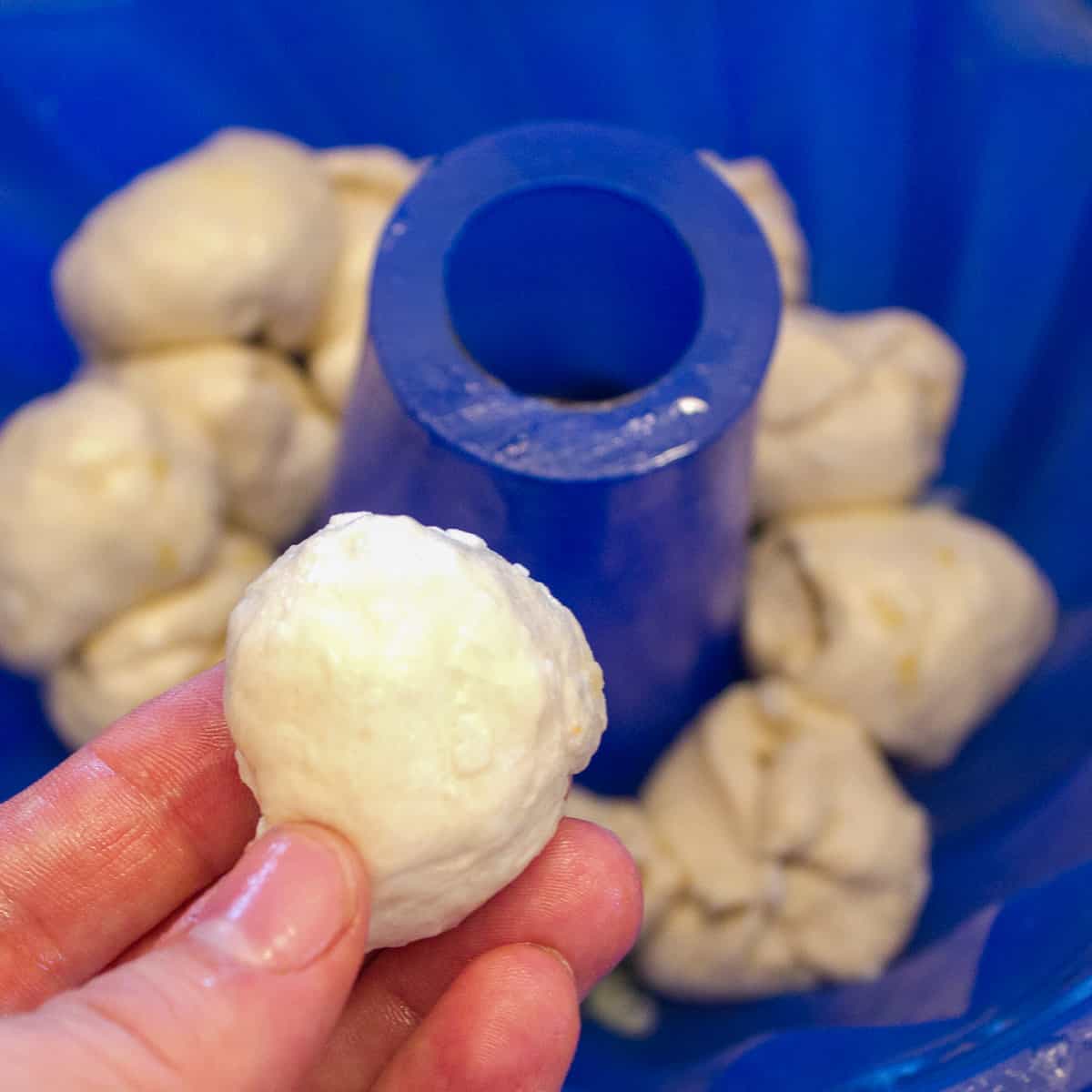 Once you brush the ball of dough, place it in the bundt pan.

Once you have finished throwing all the stuffed dough balls in the mold, it is ready to go in the oven! 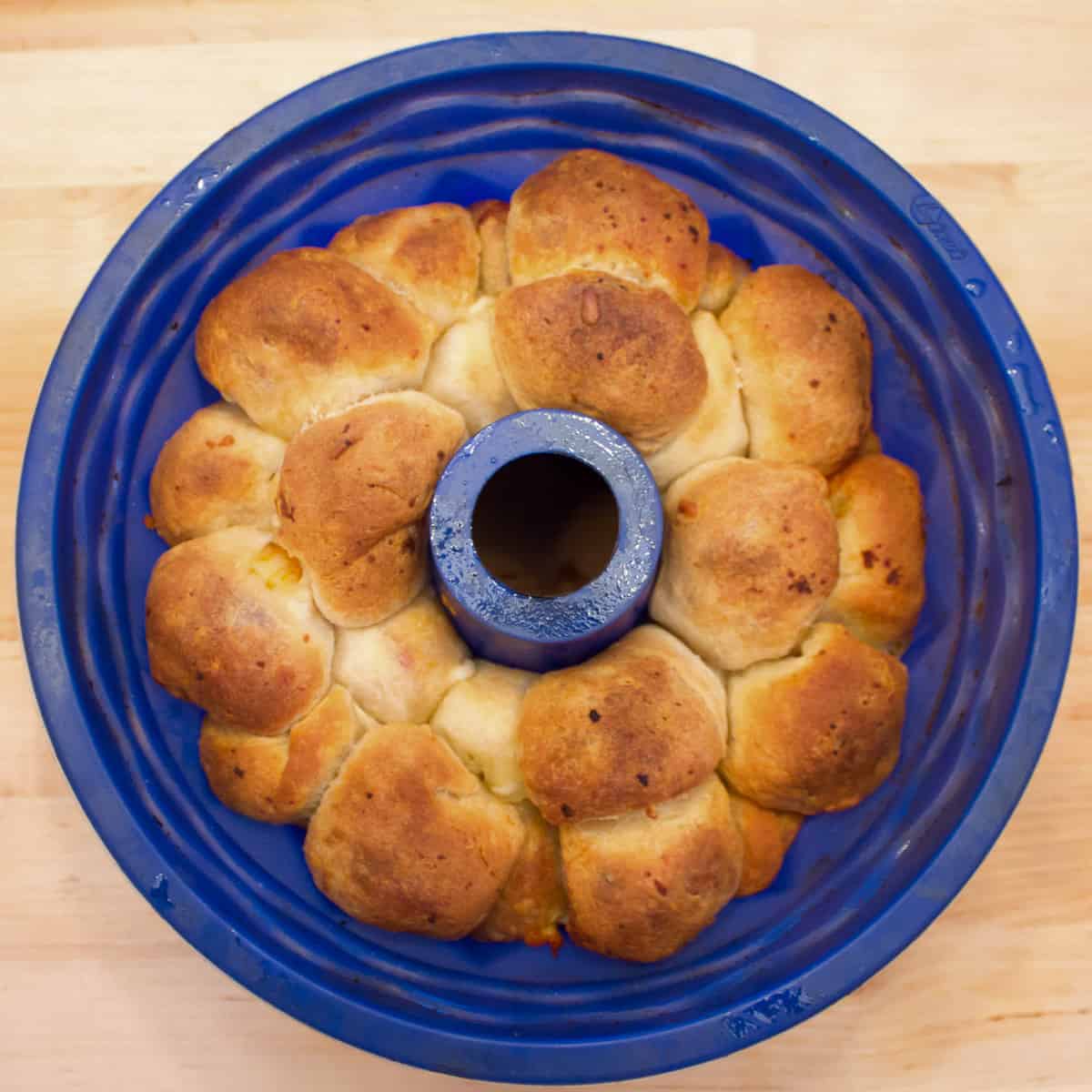 Bake it in a 400F oven for 30-35 minutes. The top will be nice and brown. Let it rest for 10-15 minutes before flipping it and removing it from the bundt pan. 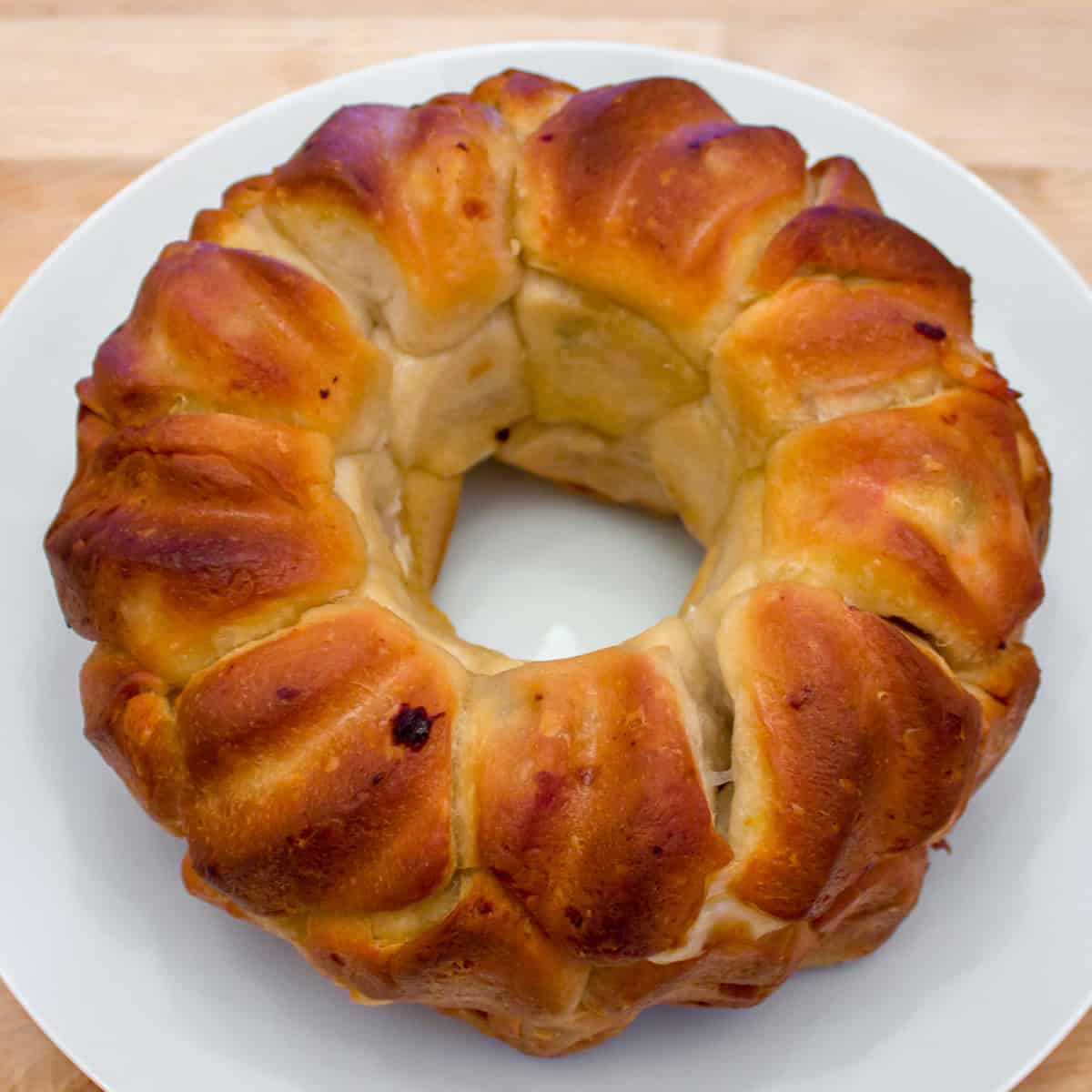 The monkey bread turned out amazing! Golden brown and stuffed with cheesy seafood goodness. It is delicious on its own but is also great with a marinara dip or hot sauce!

No ratings yet
Print
This savoury version of the popular monkey bread is similar to crawfish bread found at New Orleans Jazzfest. Each bite of bread is stuffed with your seafood of choice and lots of cheese!
Prep Time: 20 minutes
Cook Time: 30 minutes
Total Time: 50 minutes
Servings: 4