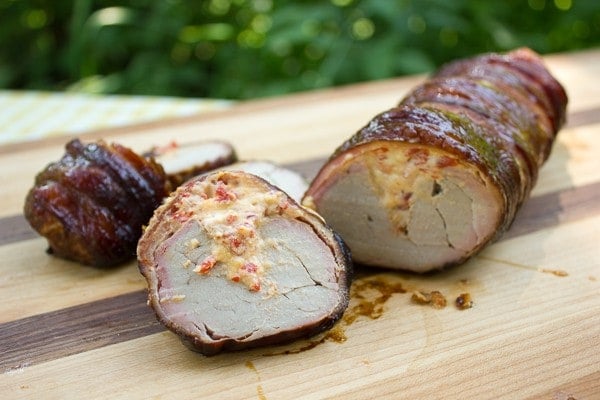 Smoking a pork tenderloin is a wonderful thing. I have probably smoked this cut of pork as much as any other piece of meat. It is reasonably priced, super tender and has a wonderful flavour when it comes out of the smoker.

I will smoke pork tenderloins just straight up with a bit of rub and BBQ sauce. It is delicious like that and also great sliced or chopped up to be used in other dishes including chili, pasta, salad, wraps and more. The possibilities are just endless.

But, my favourite way to prepare a smoked pork tenderloin is to stuff it. There are many different ways to stuff it and, over the years, I have stuffed tenderloins with many things. During the next couple weeks I will be sharing a lot of recipes with different types of stuffing that are all excellent. 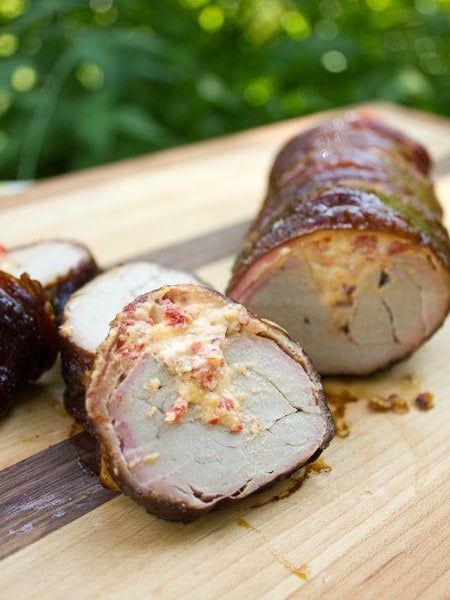 This stuffing is made with a mixture of cream cheese and grated mozzarella. Along with the cheeses, I also mixed in some minced roasted red peppers which provides a wonderful rich flavour to the stuffing.

Stuffing meat is great, but there is always the fear of the stuffing spilling out. With pork tenderloin that can be a common occurrence because it is not as large of a cut of meat and it is difficult to make a large pocket to hold the stuffing in place. Tying a stuffed cut of meat with kitchen twine helps to keep the stuffing where it is supposed to be.

Instead of tying up the pork tenderloin, I try a different approach. I wrap the stuffed meat in bacon. This does multiple things to help the finished product. First, it does keep the stuffing in place. Even melted cheese usually stays inside the meat. Check out the pic below and you can see that just a little bit of cheese was bubbling out.

On top of that, bacon keeps the meat moist and juicy which is great, cause a lean cut of meat like pork tenderloin can be known to dry out. The other reason I do this is because it is bacon! Everything is better with bacon – right?!? 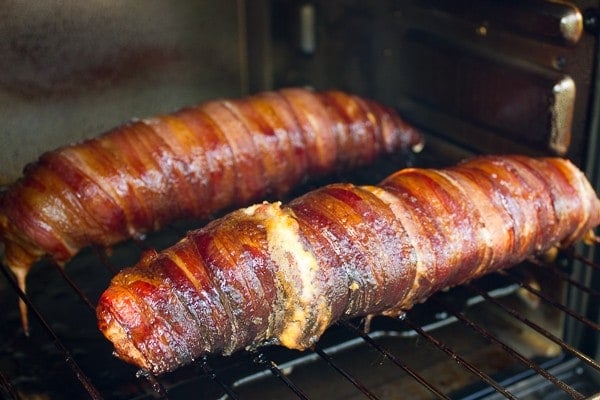 If I am smoking a pork tenderloin without stuffing and no bacon, I tend to smoke at a lower heat, usually set at 225F and smoke it until it reaches 145-150F. This results in a moist, nicely smoked piece of meat.

For a stuffed pork tenderloin, wrapped in bacon, I like to smoke it at a higher heat. Primarily, I do this so that the bacon will render and crisp up. A temperature of 275F works very well and, when stuffed, I prefer to smoke till 165F. The result is a bacon that is perfectly cooked, pork that is still moist and a cheesy stuffing that is gooey and delicious!

I have a number of different pork tenderloin recipes for the smoker: