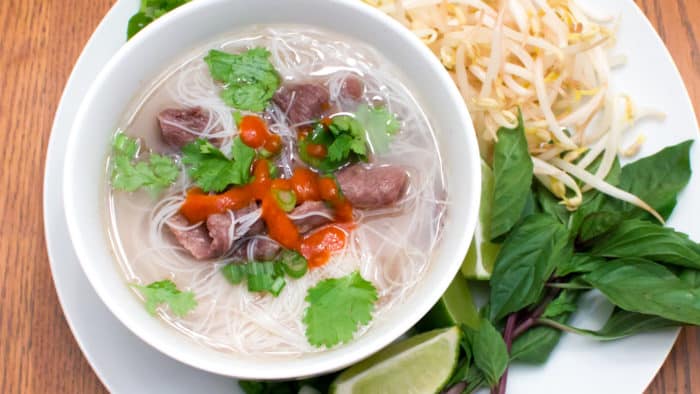 It was a handful of years ago that I experienced my first bowl of pho. I was with a couple other people and one of them was craving Vietnamese food. I love Thai, Chinese and Japanese, so I was game. It was winter and I was desiring something that would warm my bones.

Entering into the restaurant I noticed that almost every table was full and more than half had ordered the soup. I sat down and looked that the menu only to decide that I also was going to try the soup. The bowl that came was enormous. I have never seen an individual bowl of soup that large. I finished it and had discovered a new love.

Pho and I were going to be friends forever! 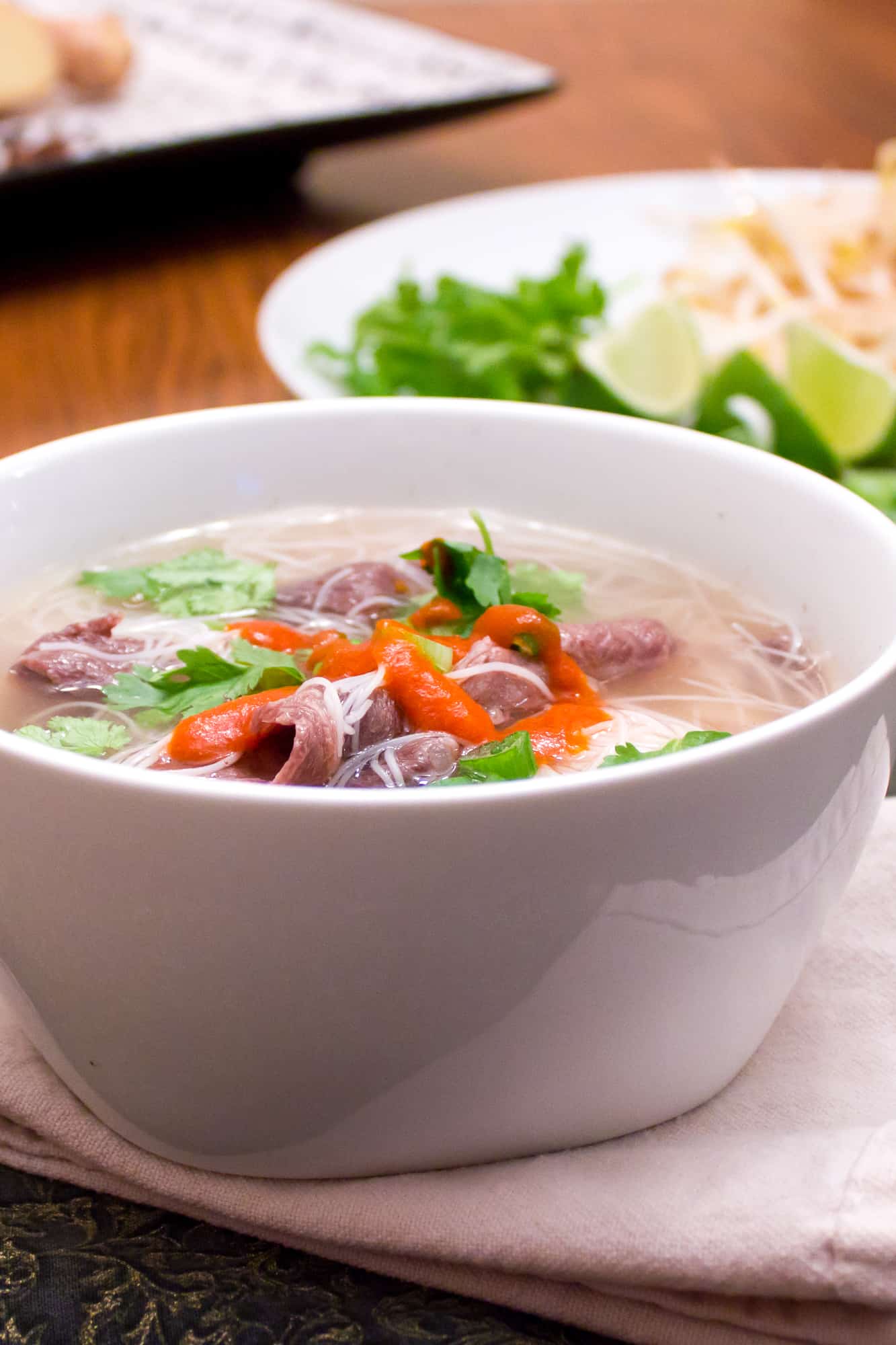 The word for soup in Vietnamese is pho and there are many different varieties of this soup, but one of the most popular is pho bo. It is a beef soup that is served with thinly sliced pieces of beef. Most restaurants serve it with the beef actually rare. The soup is very hot so once the rare meat is stirred in it cooks the beef. There are many garnishes that come alongside the pho. Along with the beef and rice noodles are bean sprouts, Thai basil, cilantro and lime wedges. 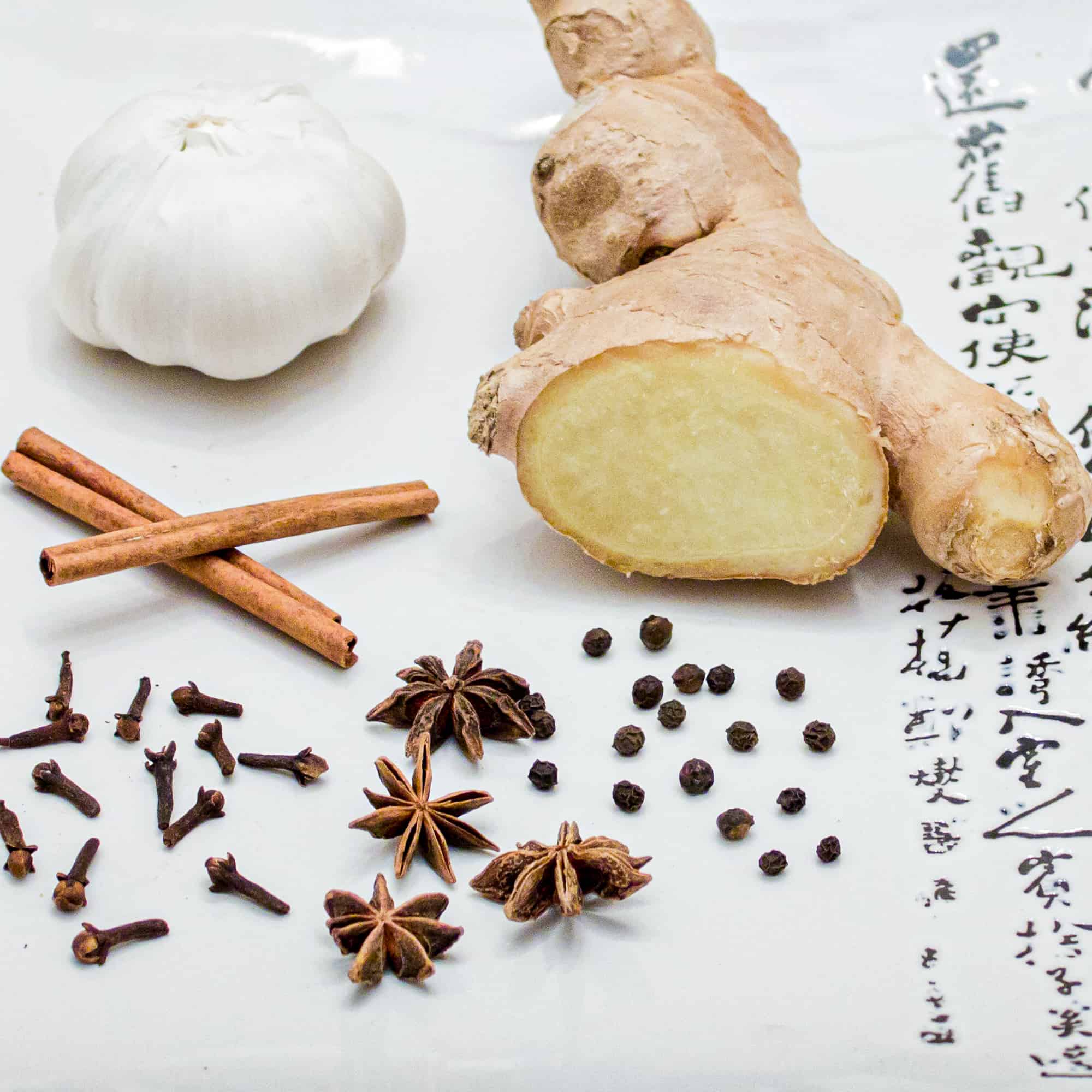 Many people also squirt a little sriracha  or hoisin sauce in their pho. Have I ever shared with you my love of sriracha sauce? It is an incredible Asian chili and garlic sauce. It has a great level of heat that I use all the time with Asian cooking. Janna and the kids prefer to add hoisin sauce to the pho. Some people refer to it as Asian BBQ sauce. Hoisin sweetens the pho nicely.

Pho is an excellent choice of soup during these winter months. It is also a great soup to have if you or someone in your family has a cold. 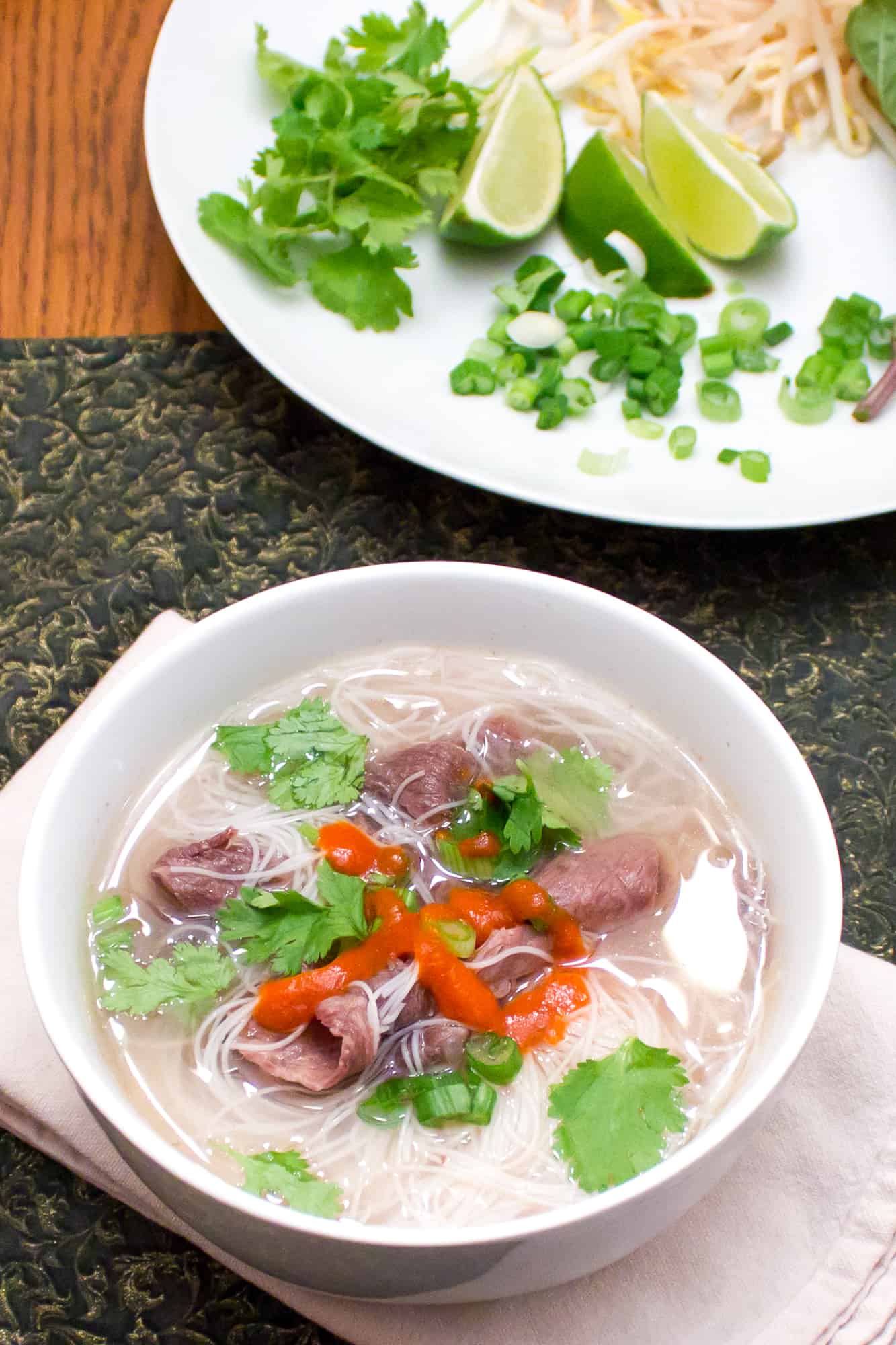 Pho Bo is a beef broth and there are many cuts of meat (short ribs, beef neck and even ox tail) you could use to build the broth. Along with the meat you could add garlic, ginger, cinnamon sticks, whole cloves, star anise and black peppercorn to the broth as it boils away and builds its flavour. 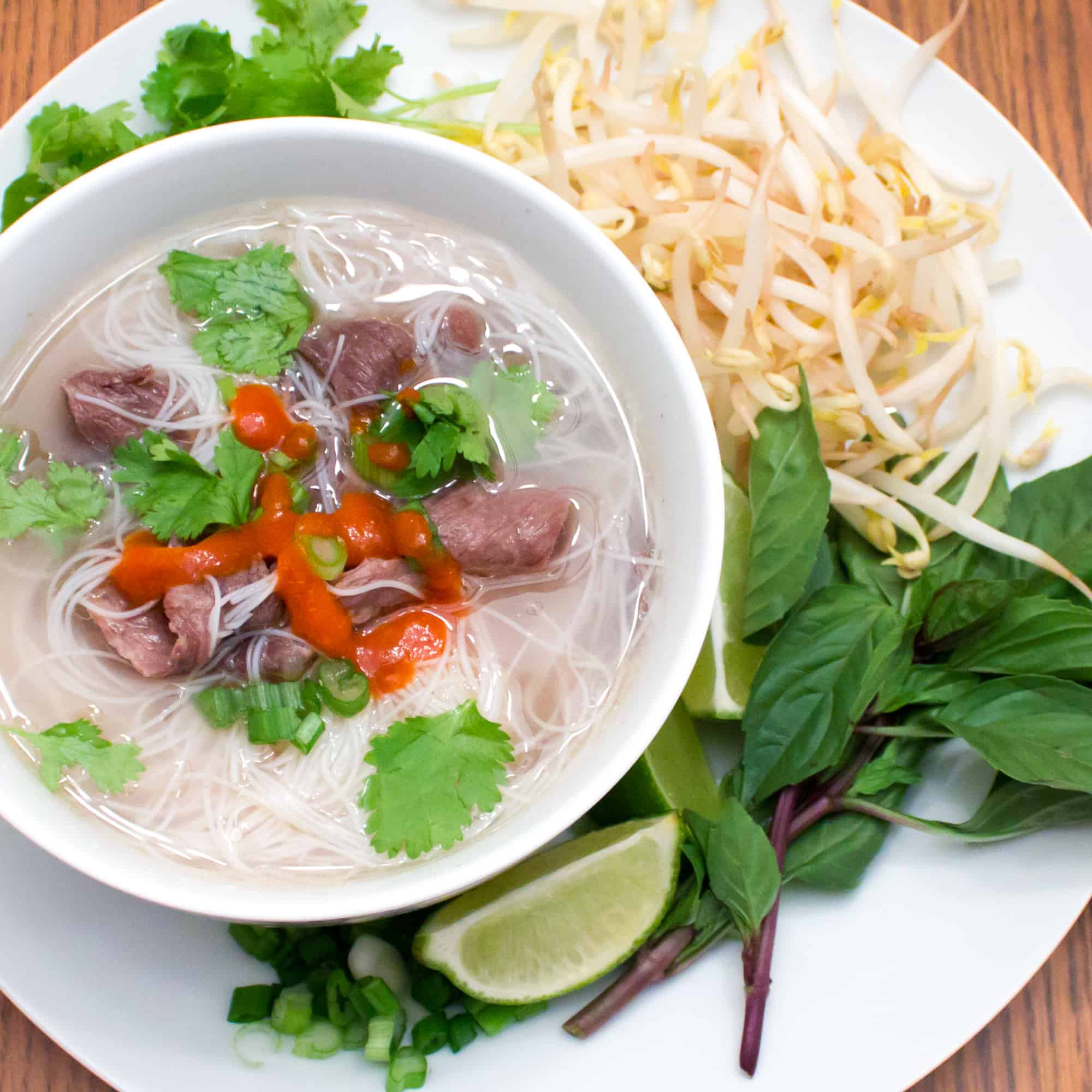 No ratings yet
Print
A flavourful soup that is classic in Vietnamese cuisine. The broth is made with a beef bone and some asian spices. Sliced beef, vermicelli noodles, bean sprouts, green onions, and Thai basil are added to the broth to make this amazing soup.
Prep Time: 20 minutes
Cook Time: 2 hours 30 minutes
Total Time: 2 hours 50 minutes
Servings: 8 people 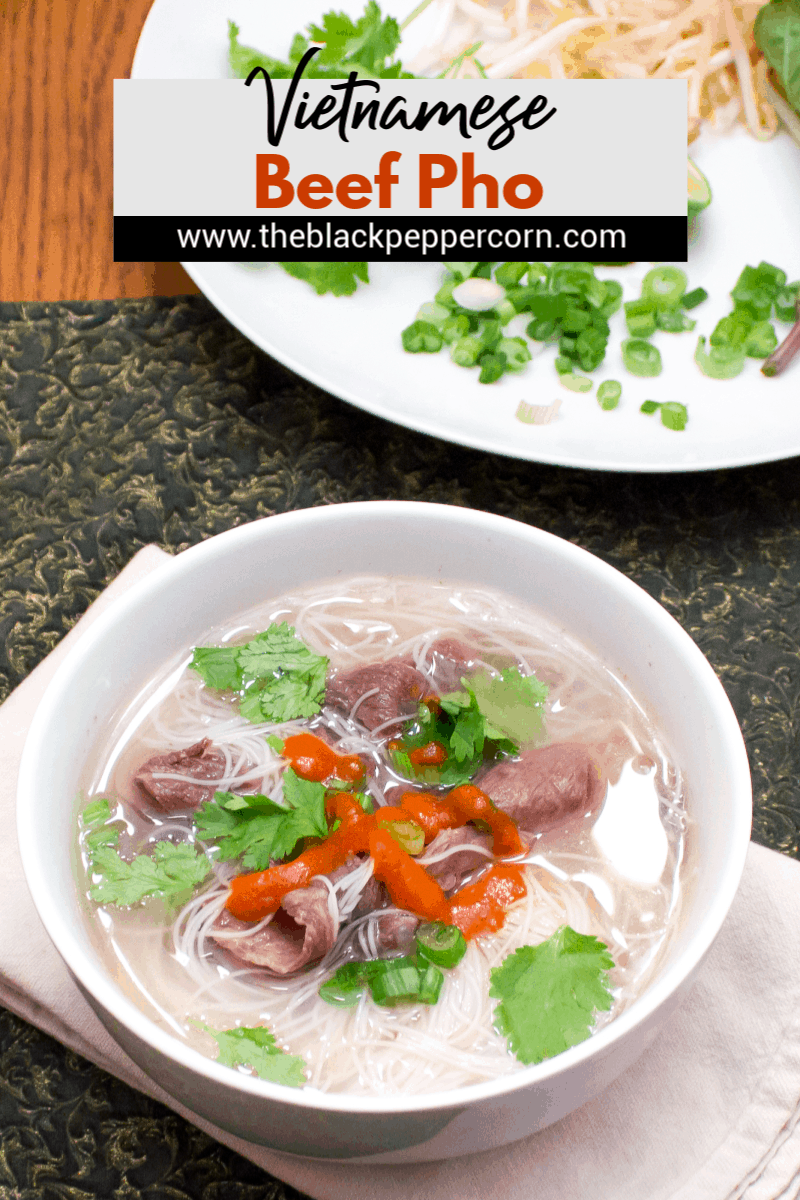