For the longest time, Thai food has been my favourite international cuisine. I love Indian, Mexican and Japanese but, when I had the choice, I always preferred Thai. Lately, I have developed a love for Vietnamese cuisine. The food from Vietnam is quite interesting with influences from many other countries.

Since Vietnam was a province of China at one time, and due to its geographic proximity, the Chinese influence is obvious. There is a Thai influence through the use of similar herbs, spices and cooking techniques. The Indian influence is seen throughout the southern region of Vietnam with the presence of curry based dishes. There is even a significant French aspect in the local cuisine with the various forms of crepes and the classic Vietnamese sandwich, banh mi, made from a French baguette.

There are a number of Vietnamese restaurants near my house and I have frequented many of them. My first encounter was the classic Vietnamese soup called pho. I love the flavour of the broth, the tender beef, the crisp bean sprouts and the fresh Thai basil. It took me a while to try something else (when I find something I like, I stick with it!), but eventually I have tried many different Vietnamese dishes.This week though, was my first attempt to try to prepare some Vietnamese food at home. I am not sure why it took so long, but I am glad I have finally given it a go.

This coming weekend is the Canadian Thanksgiving holiday. We are spending Sunday and Monday with my wife’s side of the family and Monday is the traditional meal. I am planning to make banh mis for Sunday. They are a Vietnamese sandwich with meat, pickled daikon and carrot, cucumbers, tomatoes, fresh herbs and mayo.

I will make three kinds of meat for it; braised pork, grilled five spice chicken, and chili lime shrimp. I wanted to have a test run at the braised pork so I tried it this week. The dish I made is a traditional Vietnamese meal of braised pork and eggs. The pork is cooked ‘low and slow’ to create a tender, fall apart, meat. The broth is rich with many Asian spices and the boiled eggs are added near the end of the cooking time to soak up some of the flavour of the broth. 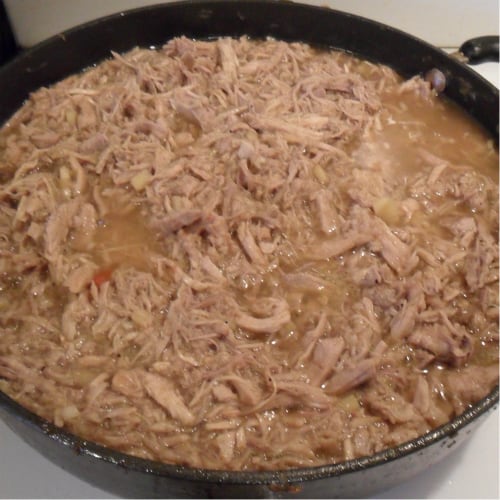 I was happy to do a test run with the braised pork and instead of making banh mis with them, I made classic lettuce wraps. The Vietnamese wrap many things with  lettuce before eating. 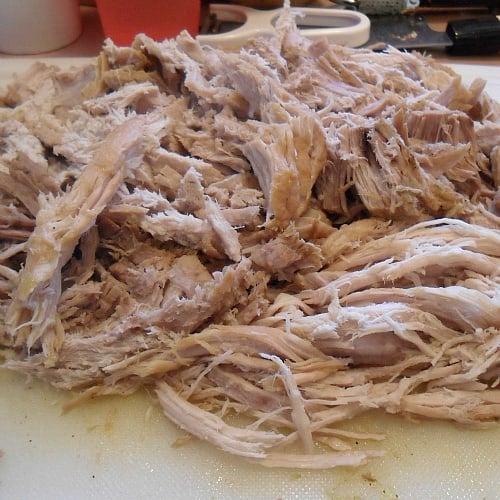 After the pork has slow cooked in the broth for 3 1/2 to 4 hours remove it and shred the meat with two forks. Add the shredded meat back into the broth. It becomes tender, juicy and full of flavour! 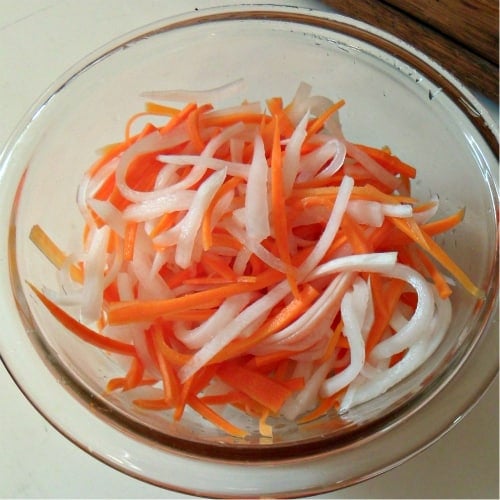 Julienne the carrots and daikon into matchstick pieces. Pour the boiling pickling mixture over them and let stand for at least 30 minutes. 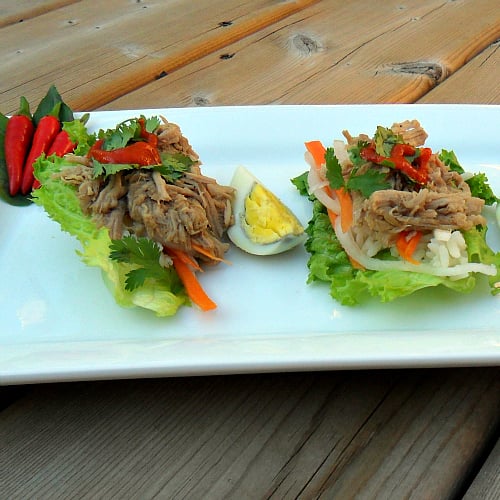