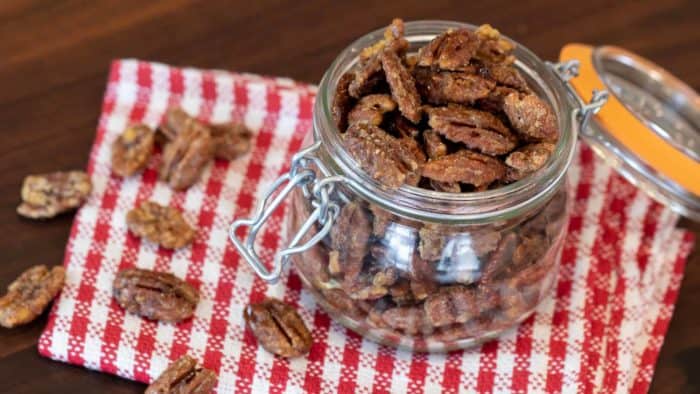 Candied pecans are a sweet and nutty treat that is seriously addictive! I remember when I went on some family trips to the southern United States and we tried pralines. Wow – they were amazing.

These candied pecans remind me of the pralines I had when I was a kid. They are great eaten by the handful and excellent used in other recipes. Try topping some candied pecans on a scoop of vanilla ice cream for a real treat!

Waiting for them to cool down is a big test in patience cause you know that they will taste amazing! 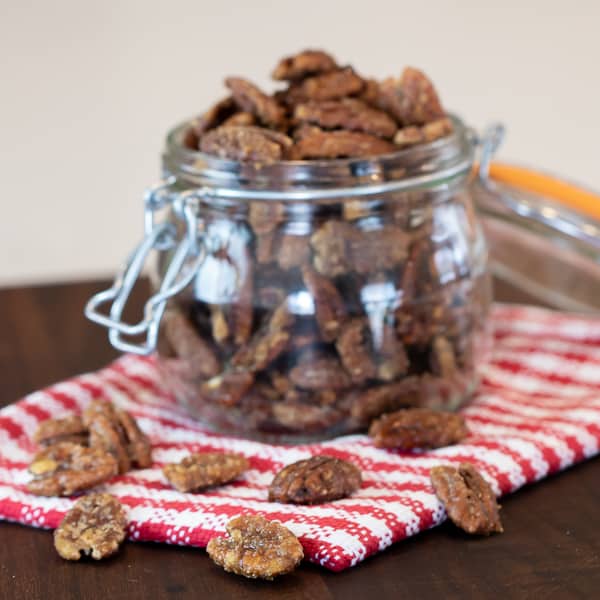 What is in the Candy Coating?

The candy coating is made with 3 basic types of ingredients: 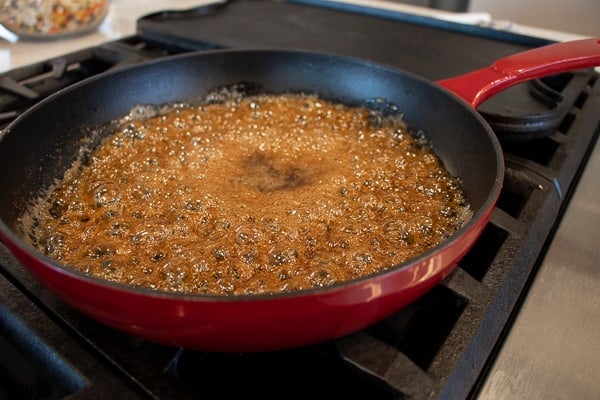 The first step to make candied pecans is to make the candy coating.

In a skillet, stir together the brown sugar, water, salt, cinnamon, cayenne and vanilla. Once dissolved, cook at medium heat. Bring to a boil and then lower the heat a little bit.

The mixture will look almost like a dark maple syrup. Let it simmer for a good 3-4 minutes. It should have a light rolling boil, but not too hard of a boil, or else the syrup will burn. 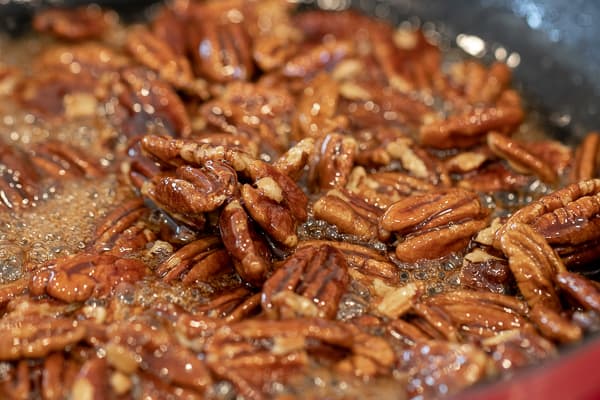 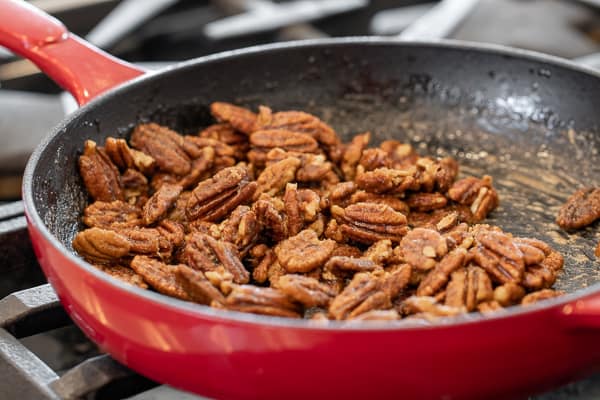 After heating the pecans in the candy mixture for a few minutes, the water will evaporate and you will be left with candy coated pecans as you can see in the picture above. The candy coating should not look watery or syrupy, but instead sugary, similar to a praline coating.

Once they look like this, take the skillet off the heat and scoop out the pecans. 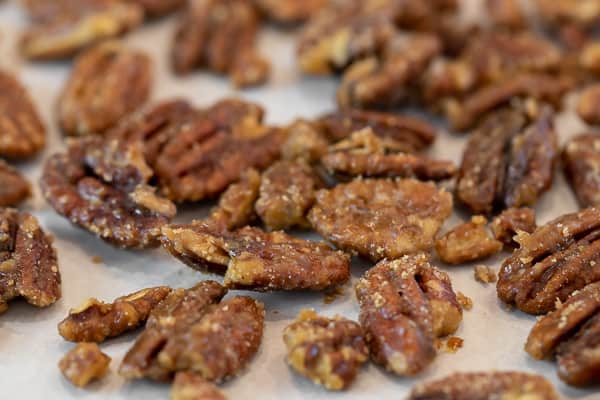 Spread the pecans of a sheet of parchment paper (a silicone baking sheet works great as well).

Make sure that the pecans are separated from each other. Don’t waste any time on this step either, because as the candy coating cools down, it will harden and if the pecans are not separated they will be one hard clump.

Let the pecans cool down completely. Once cool, they can be served, stored or used in a different dish or recipe. To store, I like to use a mason jar. 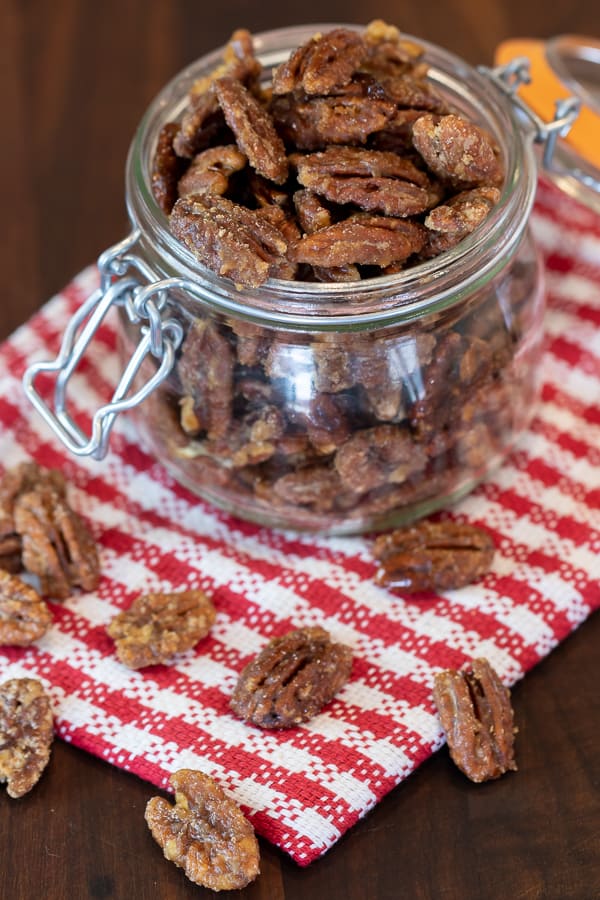 Candied pecans can be used so many ways!

5 out of 5
5 reviews
Print
Candied pecans is super easy to make on the stovetop with this recipe. These taste just like praline pecans and made with brown sugar, cinnamon, salt and cayenne.
Prep Time: 5 minutes
Cook Time: 10 minutes
Total Time: 15 minutes
Servings: 8 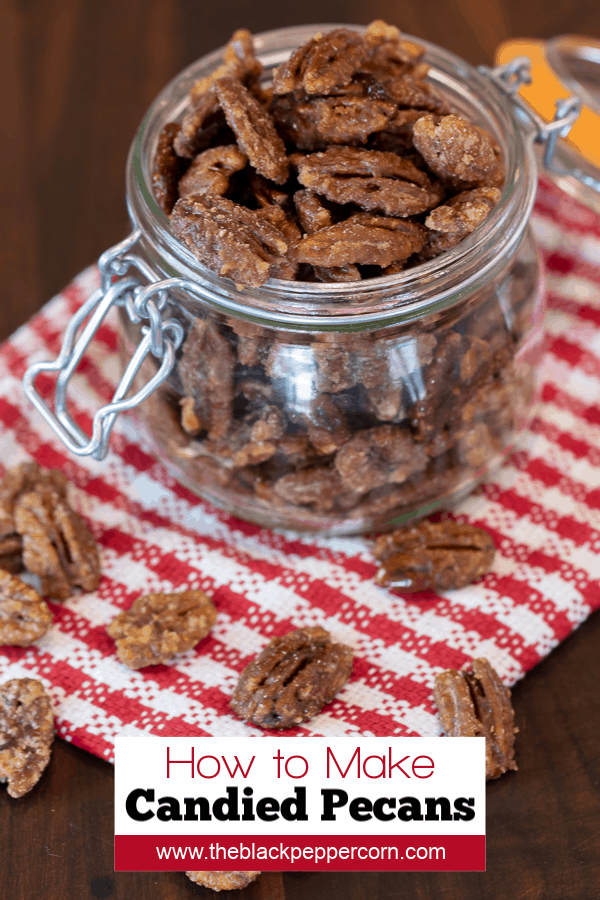