There have some changes around The Black Peppercorn lately. Over the last week, I have been working with Dawn from DPK-Graphic Design to create a new logo and header. She saw what I had previously, listened to my vision for the logo and created something I am thrilled with.

You can see in the logo below and on the header at the top of the page. If you are looking at hiring someone to do graphic design for you or for your site, I would highly recommend Dawn.

This weekend was Father’s Day and the family took a trip to see my parents. Therefore, I did not have a chance to get in the kitchen to cook.

Today’s recipe is something I made a while ago, but was waiting for the right time to share it on The Black Peppercorn. These sweet peppers are stuffed with a fiesta rice that is made with chorizo, black beans and corn. 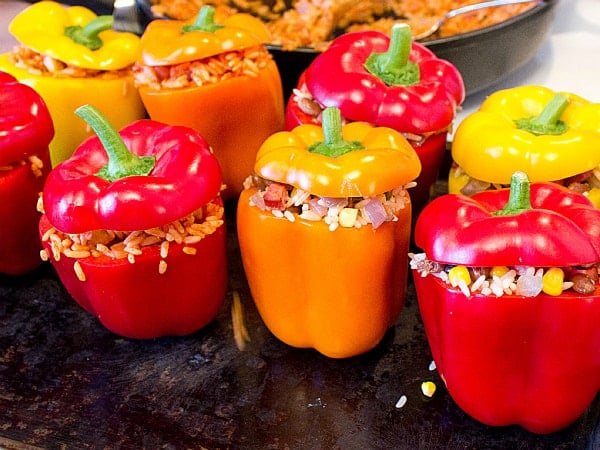 Sweet peppers have such vibrant colours and I used a mix of them to create a nice rainbow look.

The chipotle gravy is similar to country gravy but the chipotle pepper and adobo sauce give the gravy a nice heat. The gravy goes very well with the stuffed pepper.