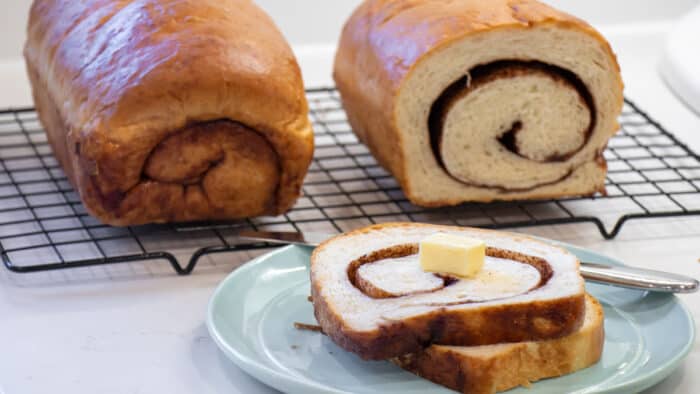 Baking fresh bread at home has become my new obsession. I have tried many different kinds of bread and will be posting plenty of recipes in the coming weeks! Sandwich bread, artisanal, baguettes and pumpernickel are some of the different breads that I have baked in the last month.

Baking bread is not difficult to do. More than anything, just takes time. Bread dough needs to proof/rise a couple of times before it bakes so, from start to finish, bread takes a good few hours to make. Most of that time though, you are just waiting while the dough rises.

My new bread has quickly become the most popular kind among those in my family. This cinnamon sweet bread tastes quite a bit like a cinnamon roll. All throughout the bread there is a swirl of cinnamon and sugar. While the sweet swirl is delicious, the bottom of the bread is just deadly as the sugar and cinnamon caramelize during the baking process and it tastes like candy.

This bread is so good! 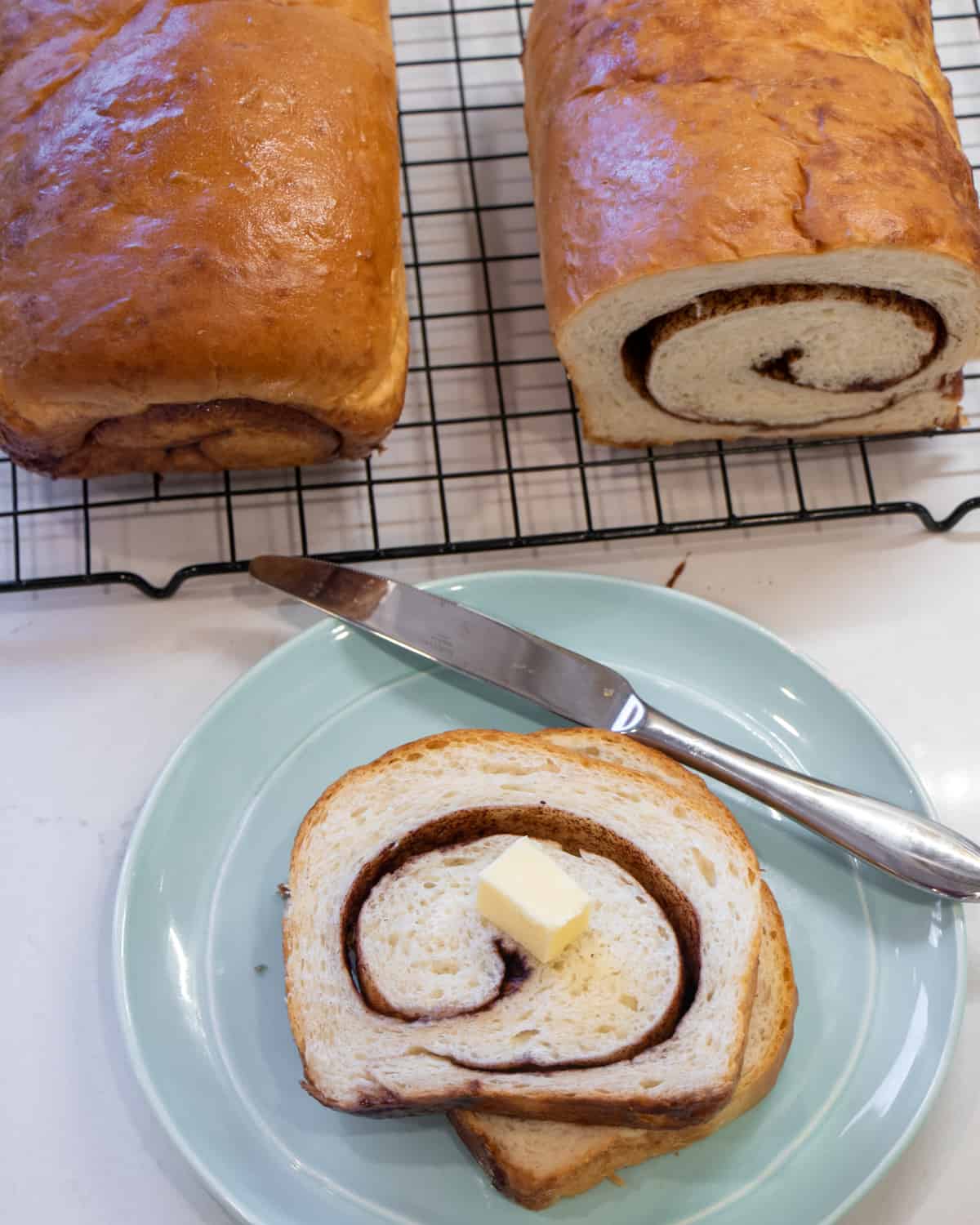 This bread actually tastes like a cinnamon roll. It is sweet, light and fluffy and surprisingly simple to make. The hardest part of this bread is the time that you will have to wait while it is rising, baking and cooling.

Trust me, the aroma that fills the house while the bread is in the oven will test your patience! You will want to dig into it right away. 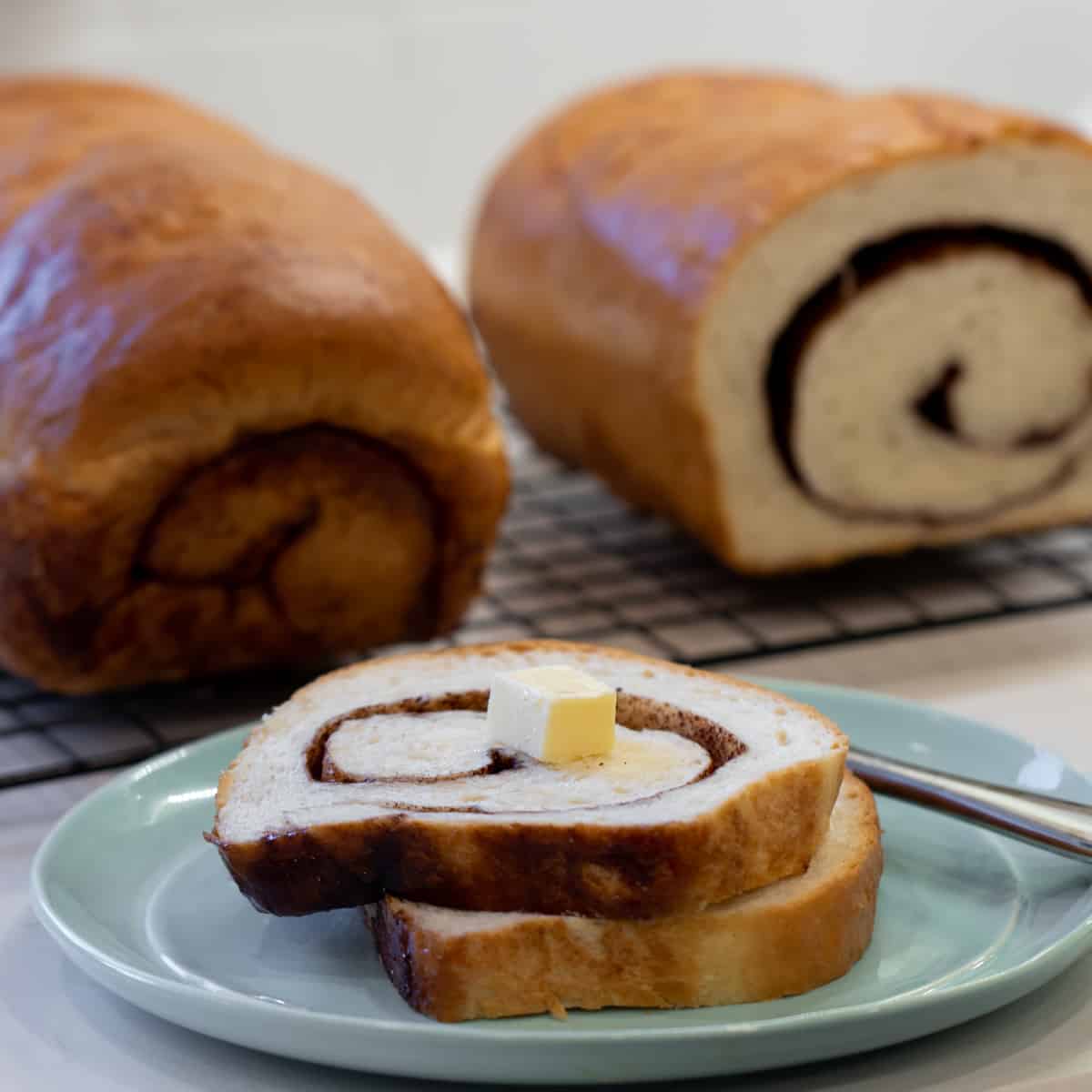 Ingredients You Will Need 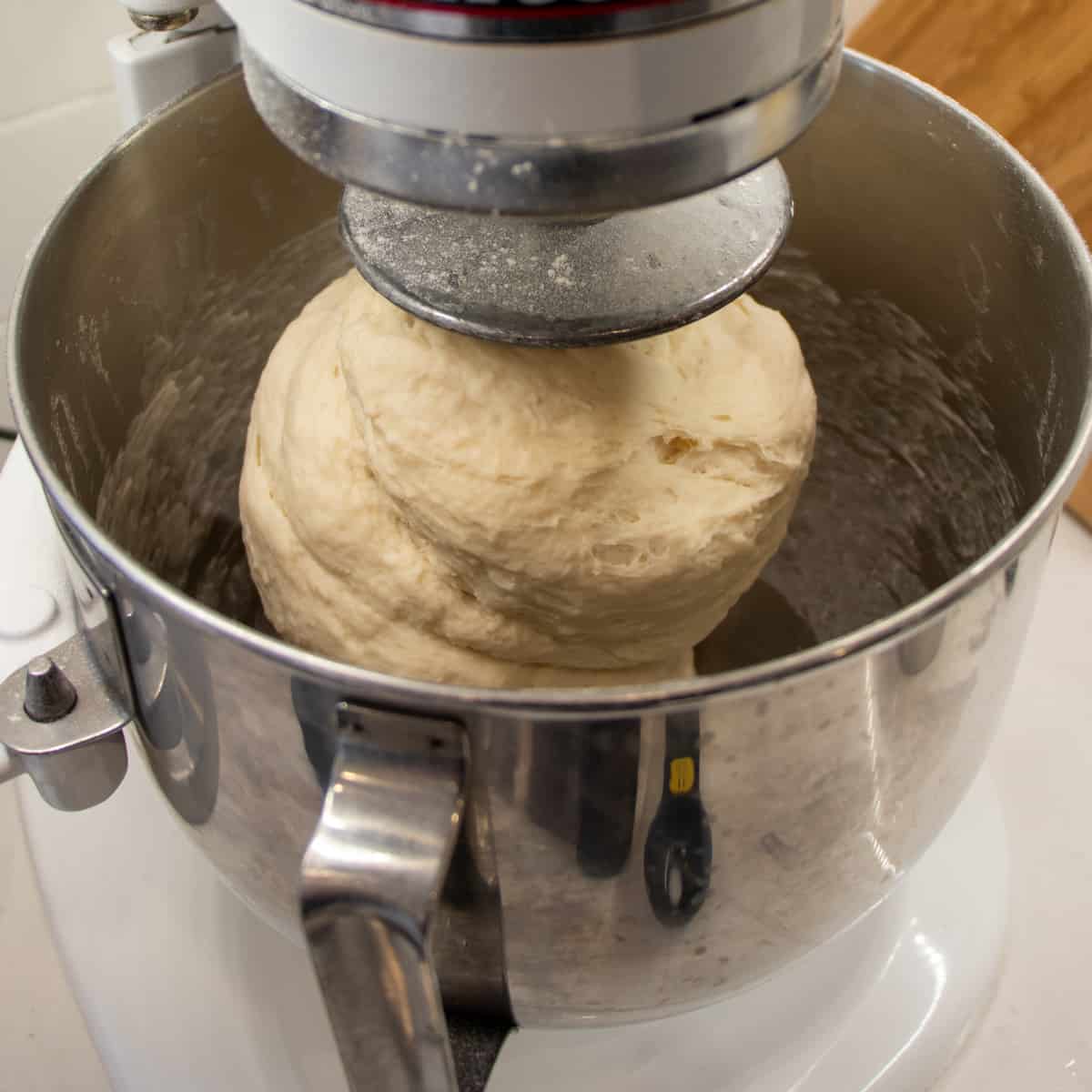 How To Make Bread Dough

I use my Kitchen Aid Mixer with the dough hook to knead the cinnamon swirl bread dough. It is super easy and takes only a few minutes to mix the ingredients and knead it into a nice smooth dough.

While the ingredients use dry active yeast, I have also included some alternate instructions in the ‘Notes’ of the recipe for instant yeast. The quantity of yeast is the same for both, it is just that dry active yeast needs to be dissolved in the warm water first, and then left to rest for 10 minutes, before mixing with the flour. 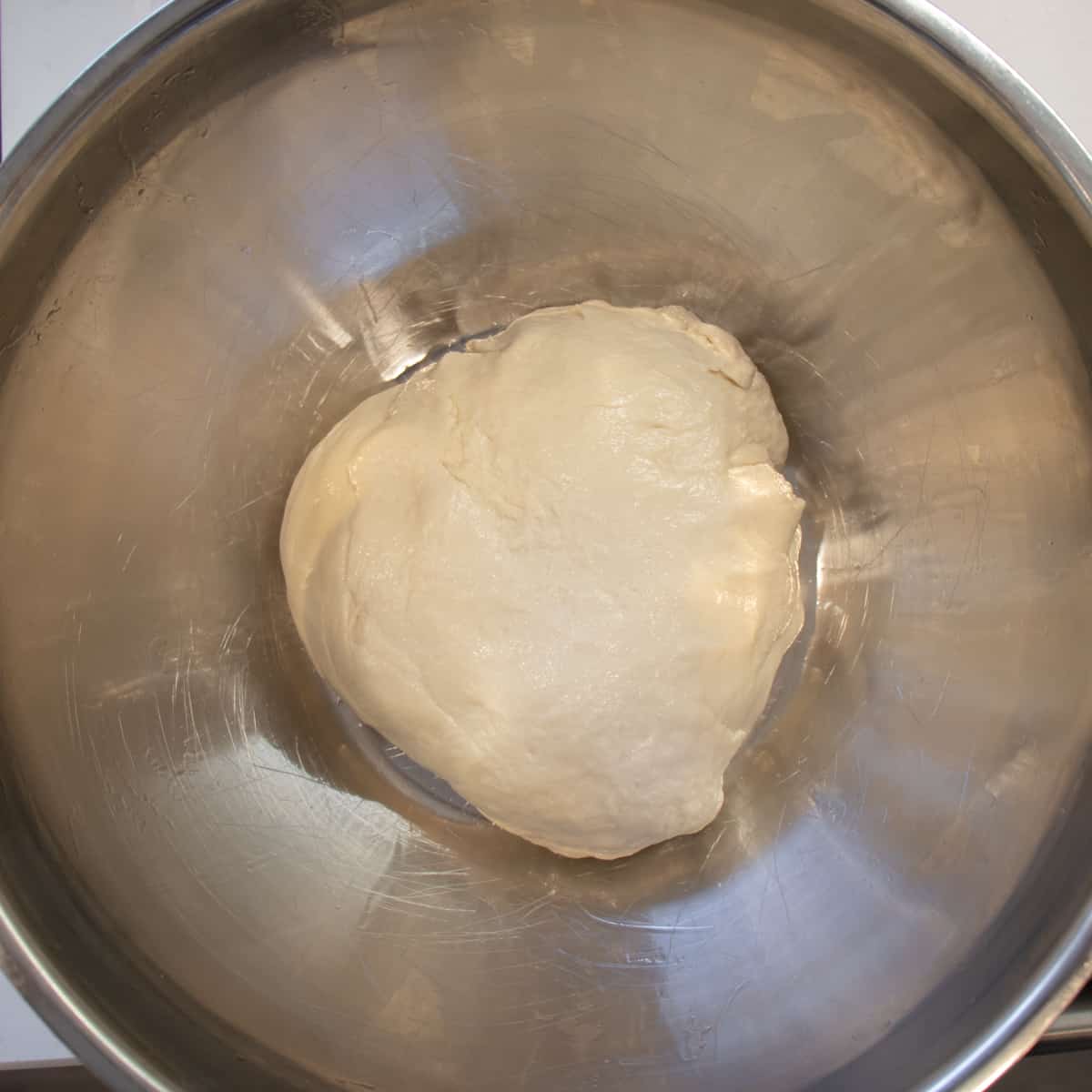 The First Rise Is Important

Grease a large bowl with oil. Form the dough into a ball and place in the bowl. Turn so that all sides lightly coated in the oil.

Cover the bowl with plastic wrap. Place in a warm spot and let proof and rise until doubled in size, about 1 1/2 to 2 hours. 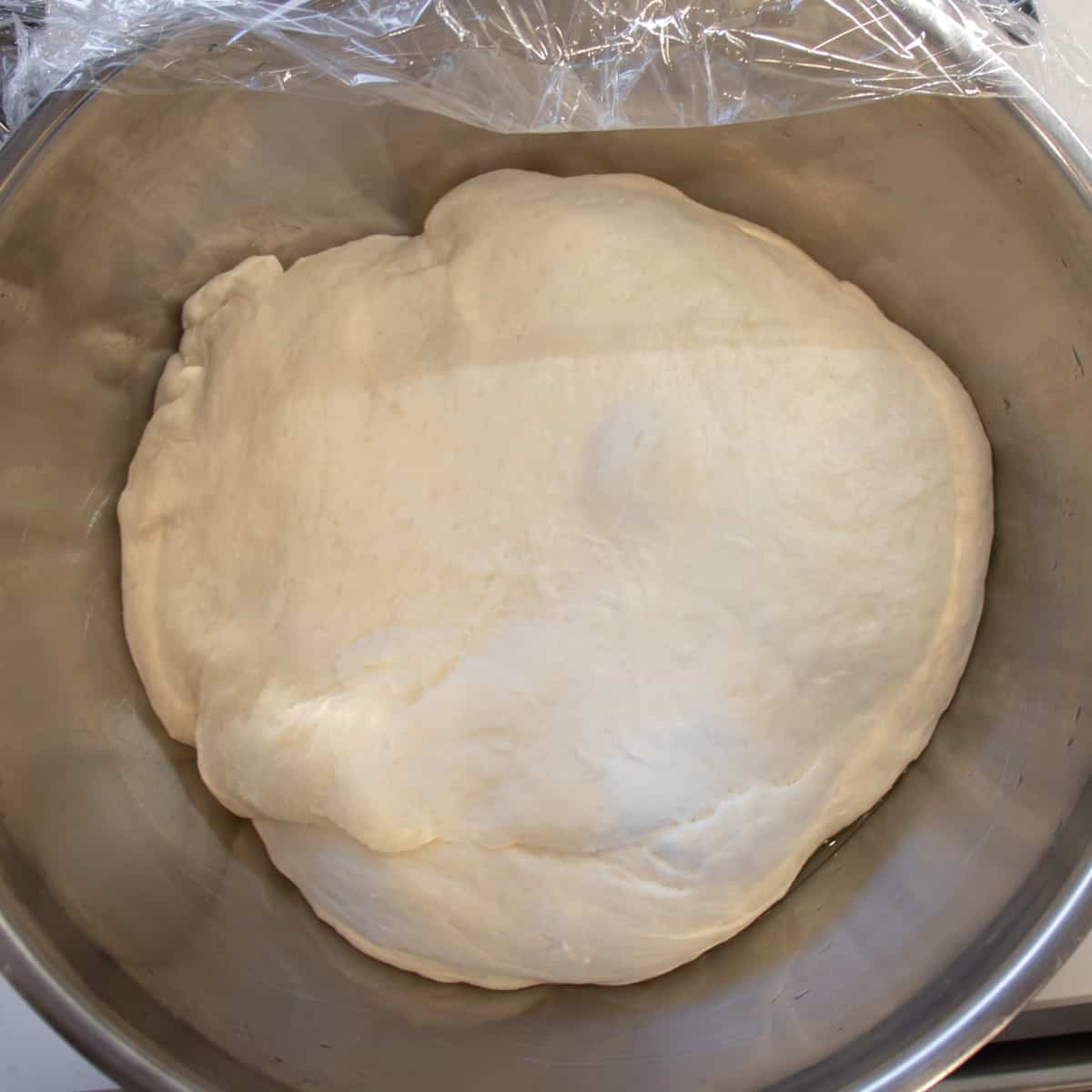 After the dough has finished its first rise, punch it down and knead it to work out the big air bubbles. Split into two equal portions of dough. 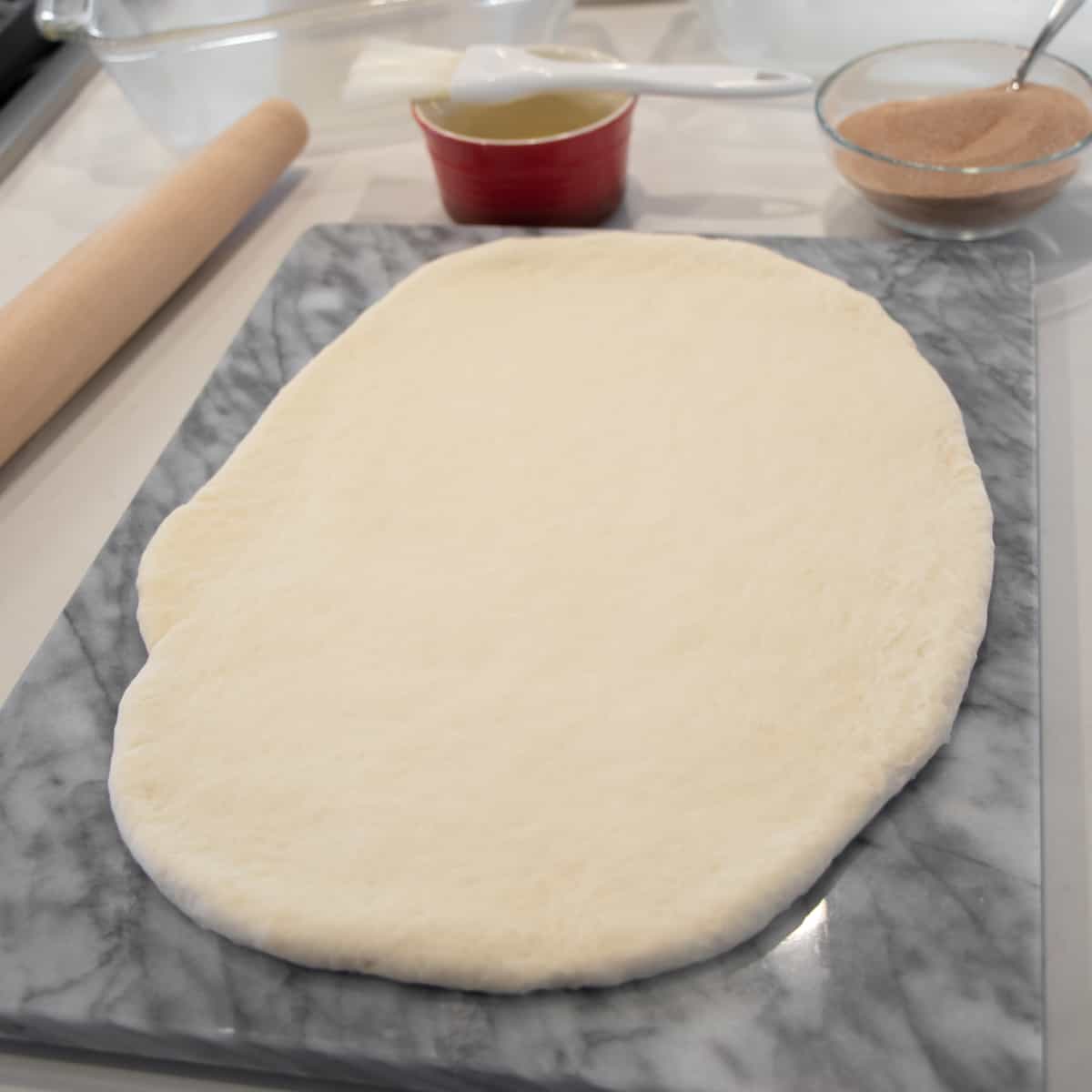 Take one portion of dough and place on a smooth surface. Roll out to the shape of a 15 x 10 inch rectangle. 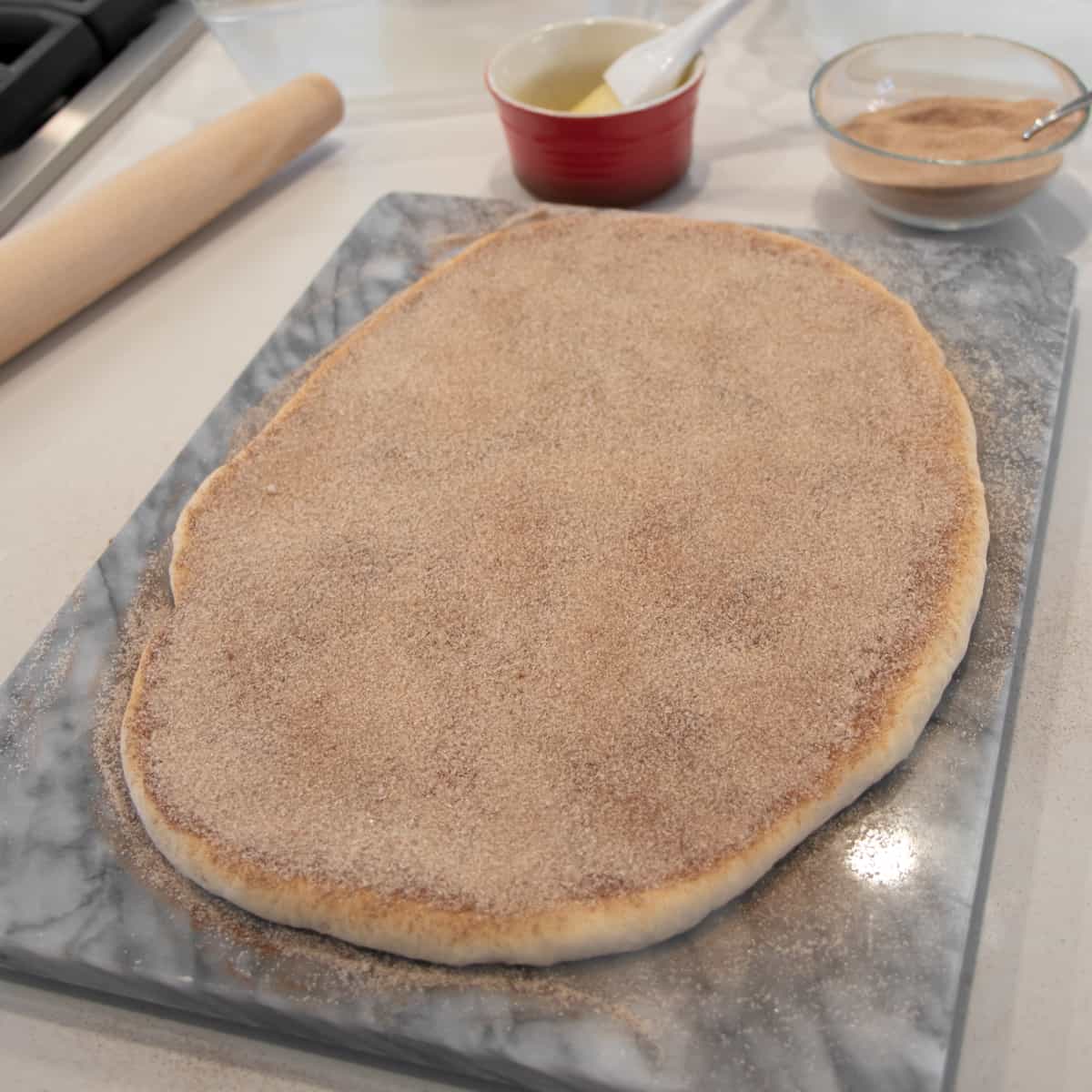 Brush the rolled out dough with melted butter then sprinkle with sugar and cinnamon. 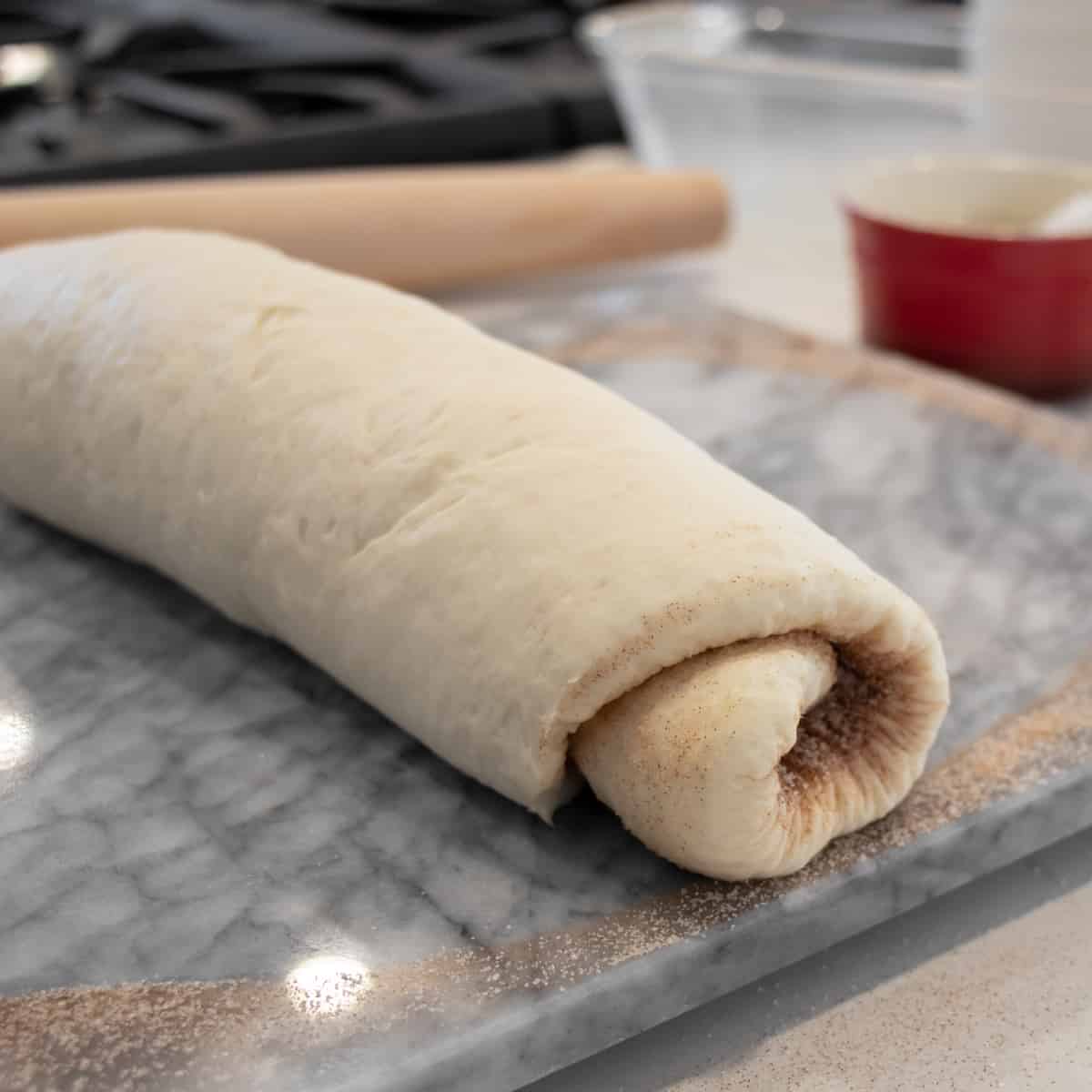 Tightly roll up the dough so that it forms a 10 inch log. 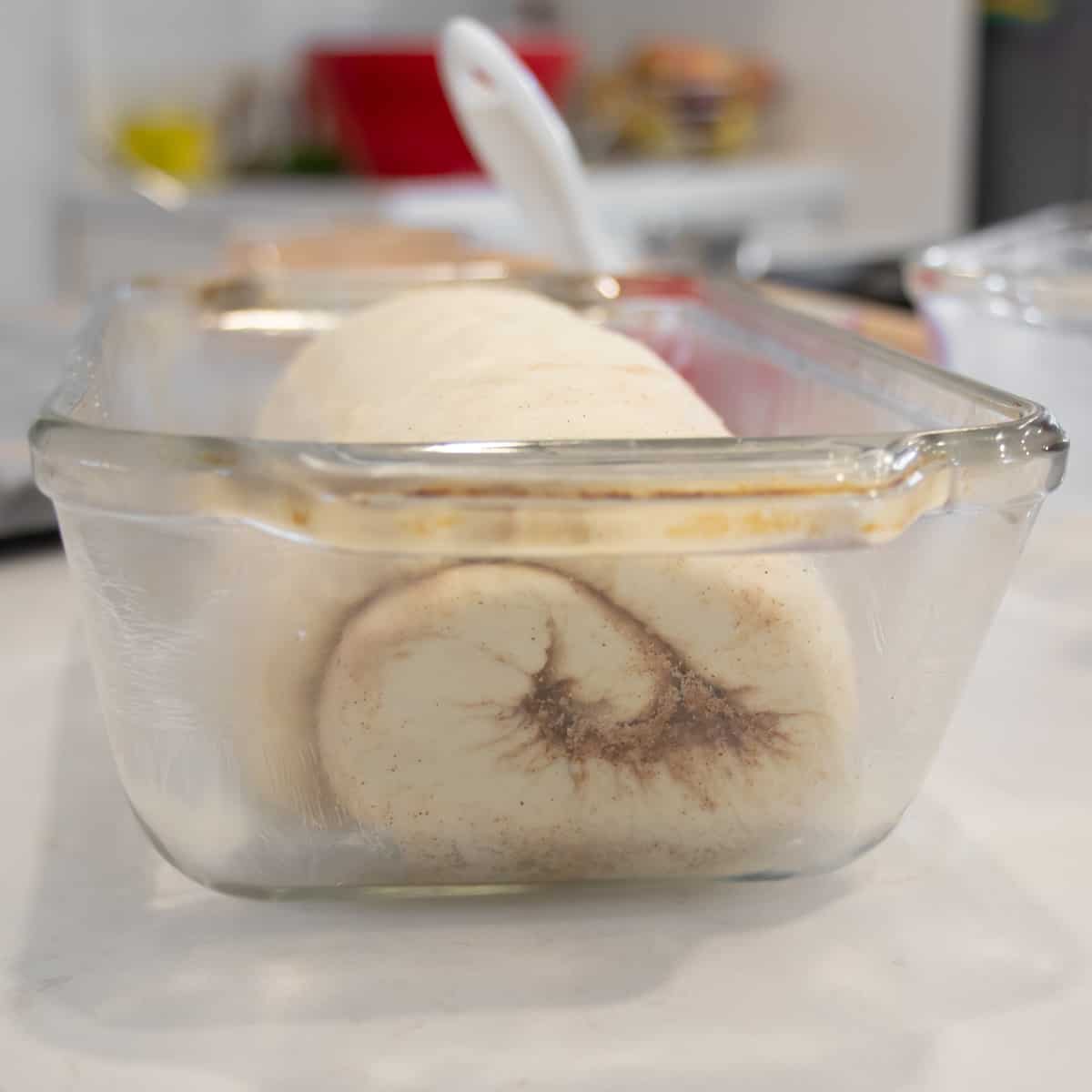 Place the rolled up dough into a greased loaf pan. Cover with plastic wrap and let rise for 60 minutes. 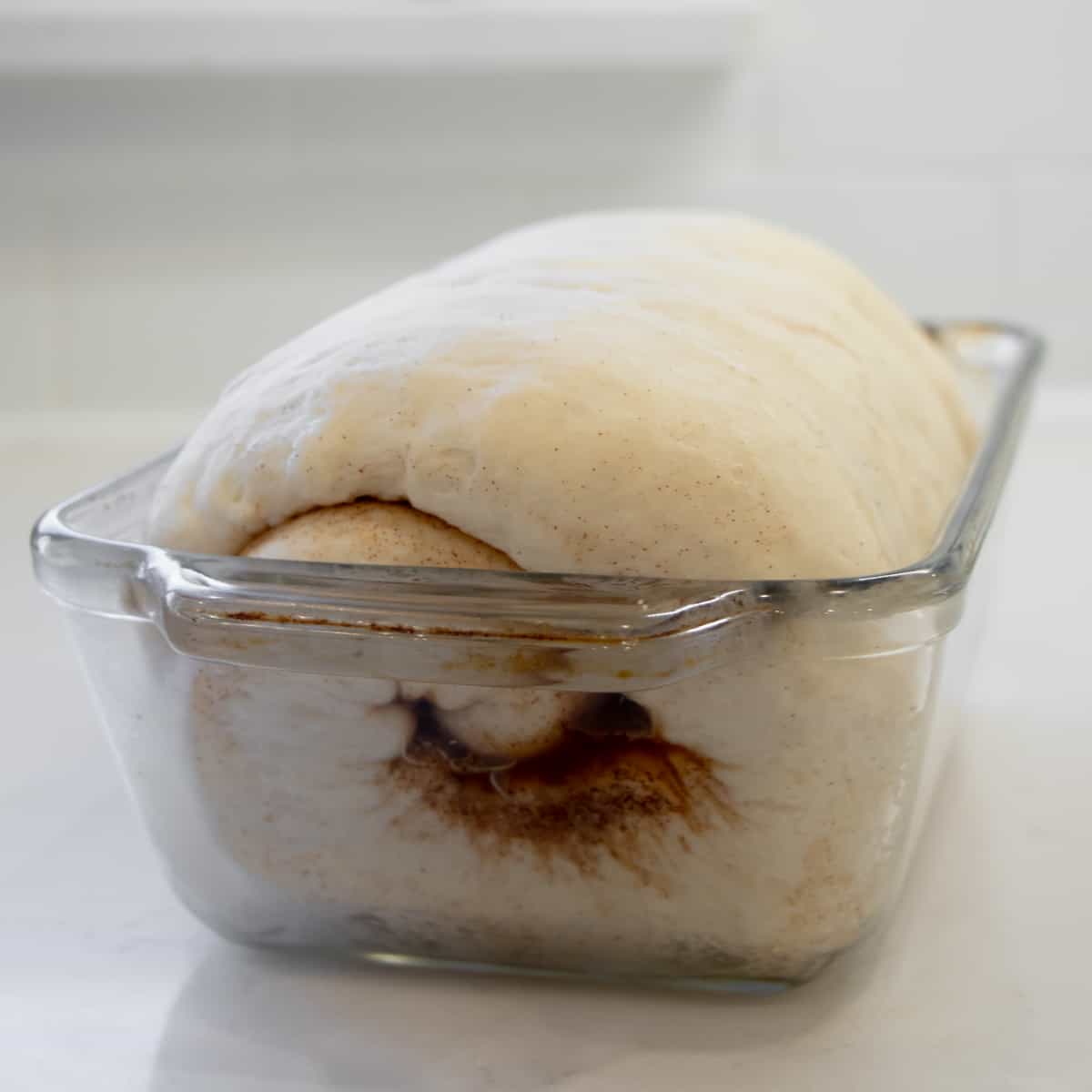 The dough is finished proofing when it has doubled in size and risen about an inch above the loaf pan.

How Long To Bake Bread In The Oven

Place the loaf pans in a 350F oven and bake for 40-45 minutes. The internal temperature of the bread should be around 195-200F if checked with a digital thermometer.

Expert Tip: Make sure to keep space between the loaf pans while they are in the oven. This allows the heat to circulate all around the bread. 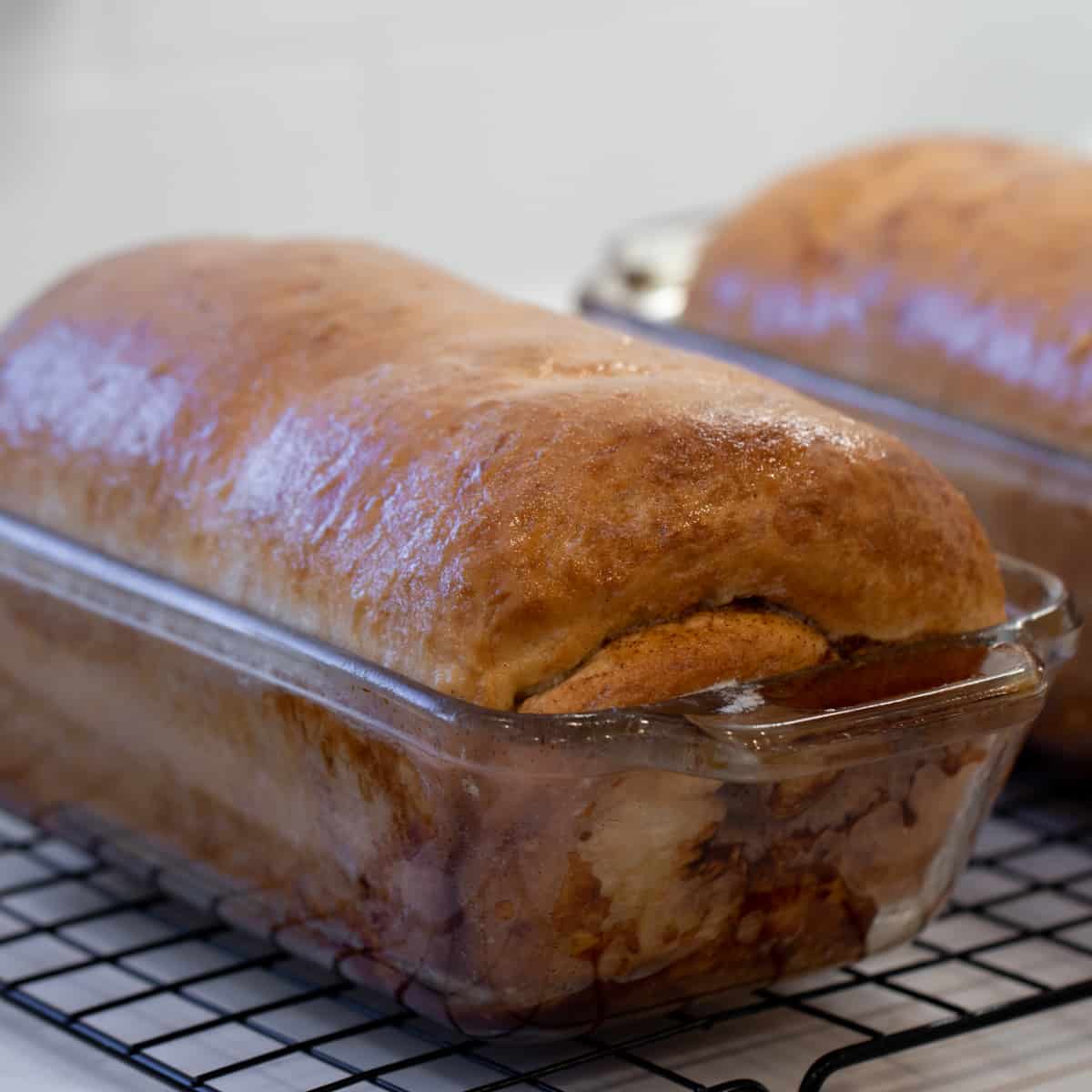 Once finished baking, place the loaf pans on a cooling rack. Brush the top of the loaves with melted butter. 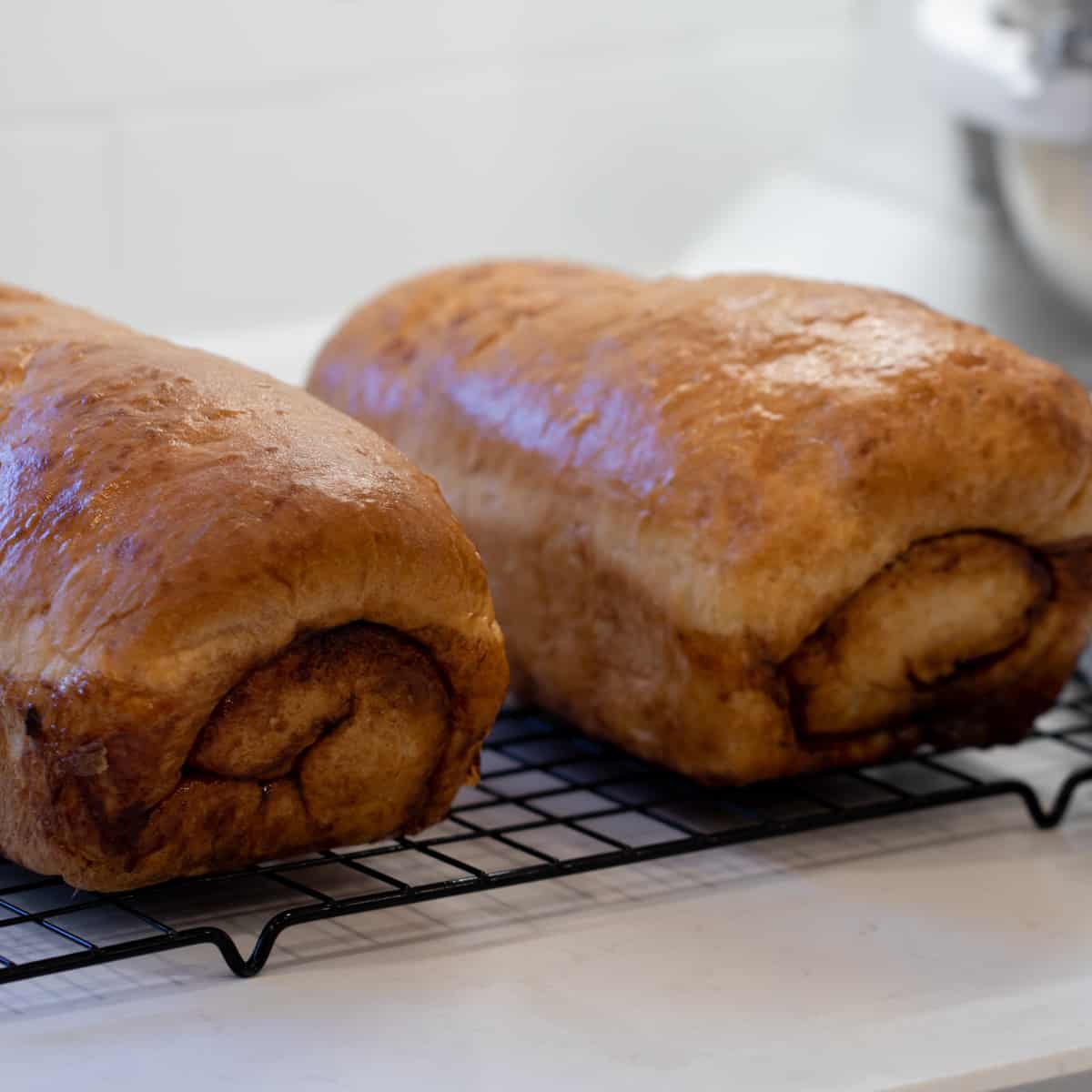 After the bread has rested for about 5-10 minutes, Remove the bread from the loaf pans and place them on the cooling rack. Run a knife along the inside of the loaf pans to ensure that the bread does not stick when they are removed. 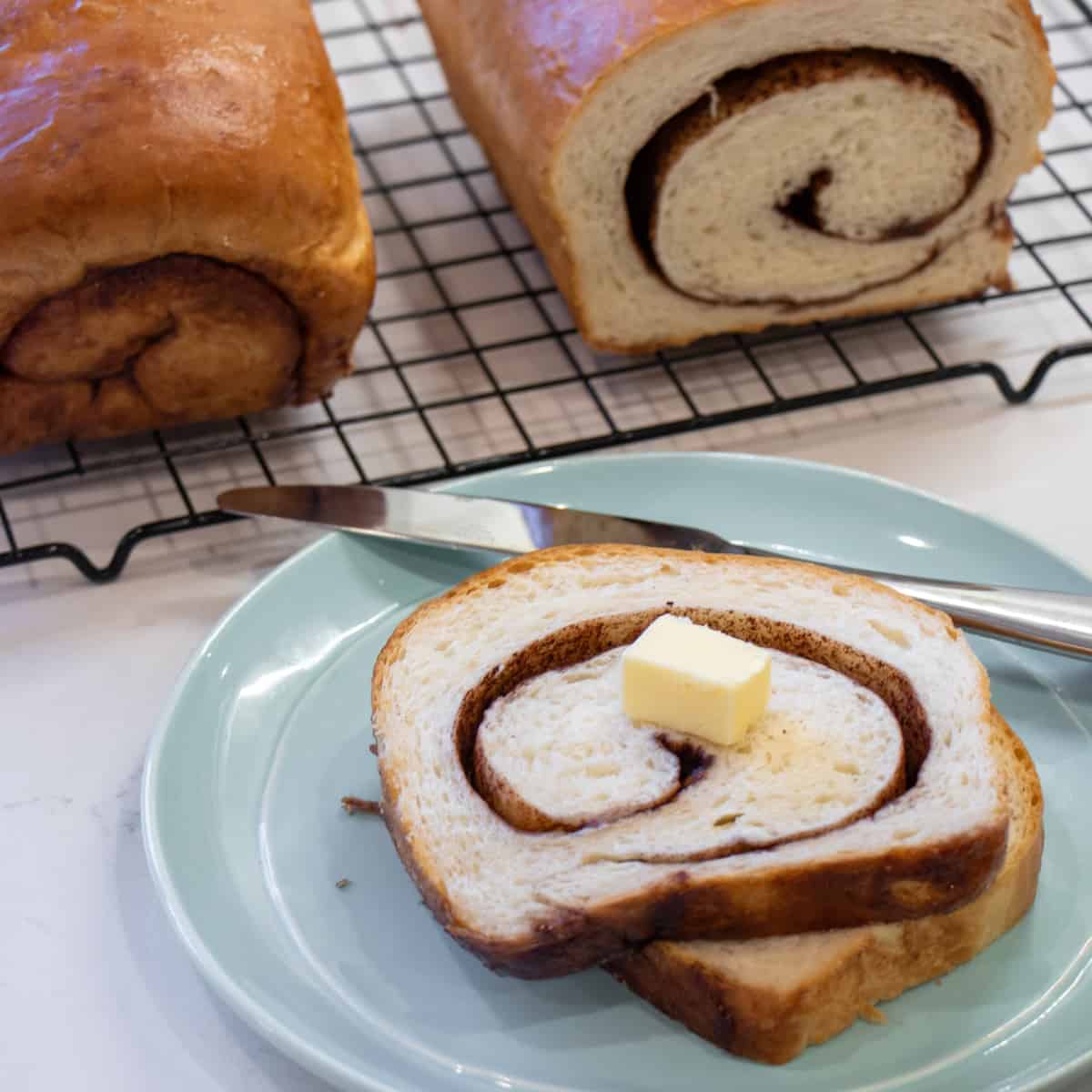 This cinnamon swirl bread is truly amazing and will not last long. My kids hover around the loaves, waiting for them to cool down so that I can cut them slice.

While the bread is incredible all on its own, it is also great toasted with butter. If you want to try something extra special, use this cinnamon bread to make some French Toast with Raspberry Sauce. Wow!!

Instant Yeast Option It is possible to make this bread using instant yeast. For this, put the flour, salt, sugar and yeast in the mixing bowl. Use a whisk to mix the yeast all through the flour. Turn the mixer on low and slowly pour in the warm milk, water and melted butter. Continue from step 4 in the instructions above.