April in Ontario has been much colder than March and today, in particular, was windy and cold. The warm stretch we experienced throughout a couple of weeks in March caused me to get all geared up for spring and summer.

I was not the only one as there were people in our neighborhood that started spring cleaning and gardening far earlier than normal.

It has been difficult to know how to dress the kids for school. A few weeks ago they walked to school in shorts and this week they have been bundled up in winter coats and gloves. We were hoping to be able to get the winter coats and boots put away by now, but the weather is causing us to hold out a little bit longer. 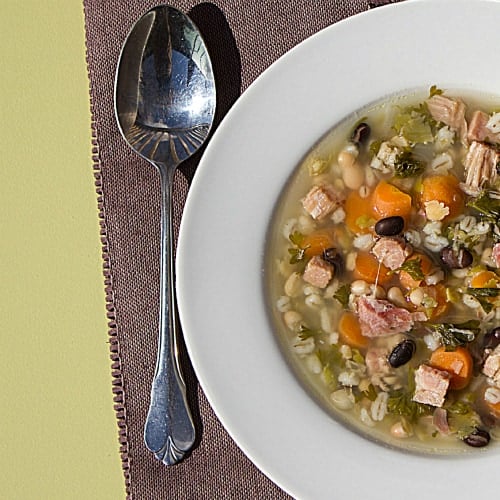 The cold wind today makes it the perfect weather for soup. I went down to the pantry to find out the supplies I had on hand to make a nice hearty bowl of soup.

Since Easter is over, I had lot of leftover ham in the fridge. I always make sure that I buy ham with a bone because it makes incredible soup. Ham and beans are a classic combination for soup and this recipe includes barley and split peas to make it extra hearty.

The split peas are great because they break down during the cooking and become a thickening agent for the broth. If there weather for you has been a cool and windy, I encourage you to whip up a pot of this ham and bean soup. It will warm you right up! 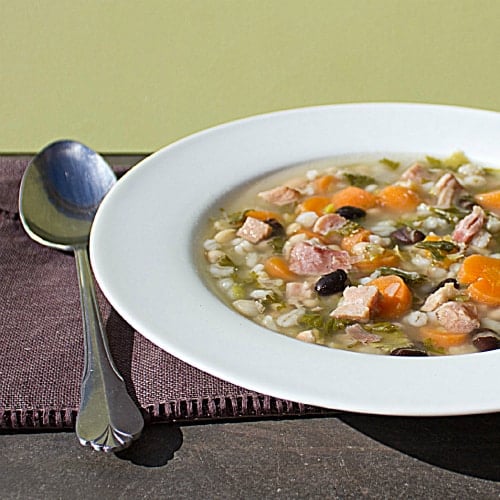 Crockpot directions – At step 2, add all the ingredients to a crockpot and set on low for 5-6 hours. 15 minutes before the end of the cooking time, stir in the chopped parsley and salt and pepper.
Author: Steve Cylka
Course: Soup
Cuisine: Canadian