An amazing side dish with browned caramelized brussels sprouts that taste similar to being roasted. Tossed with crisp bacon and fried onions to make this something you will want to make again and again! 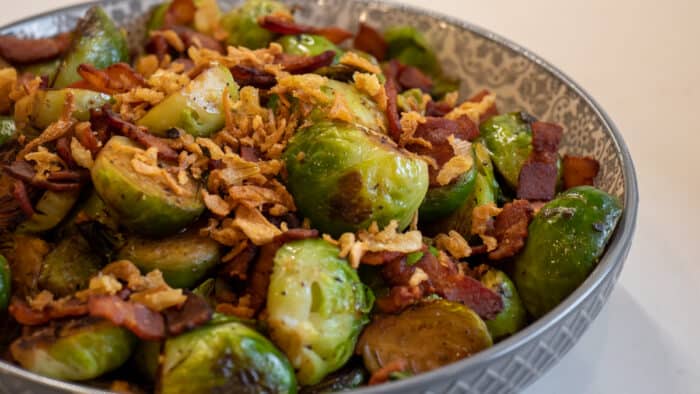 The best brussels sprouts recipe I ever had was one mom used to make when I was a kid. I know that lots of kids hate brussels sprouts, but honestly, I always loved when my mom put a bowl of what I always called mini cabbages.

These pan fried brussels sprouts are so good and having them be topped with crumbled bacon and crispy fried onions turns a tasty vegetable into an incredible side dish. Once you make them, you will be looking for the next opportunity to cook them again soon!

Ingredients You Will Need 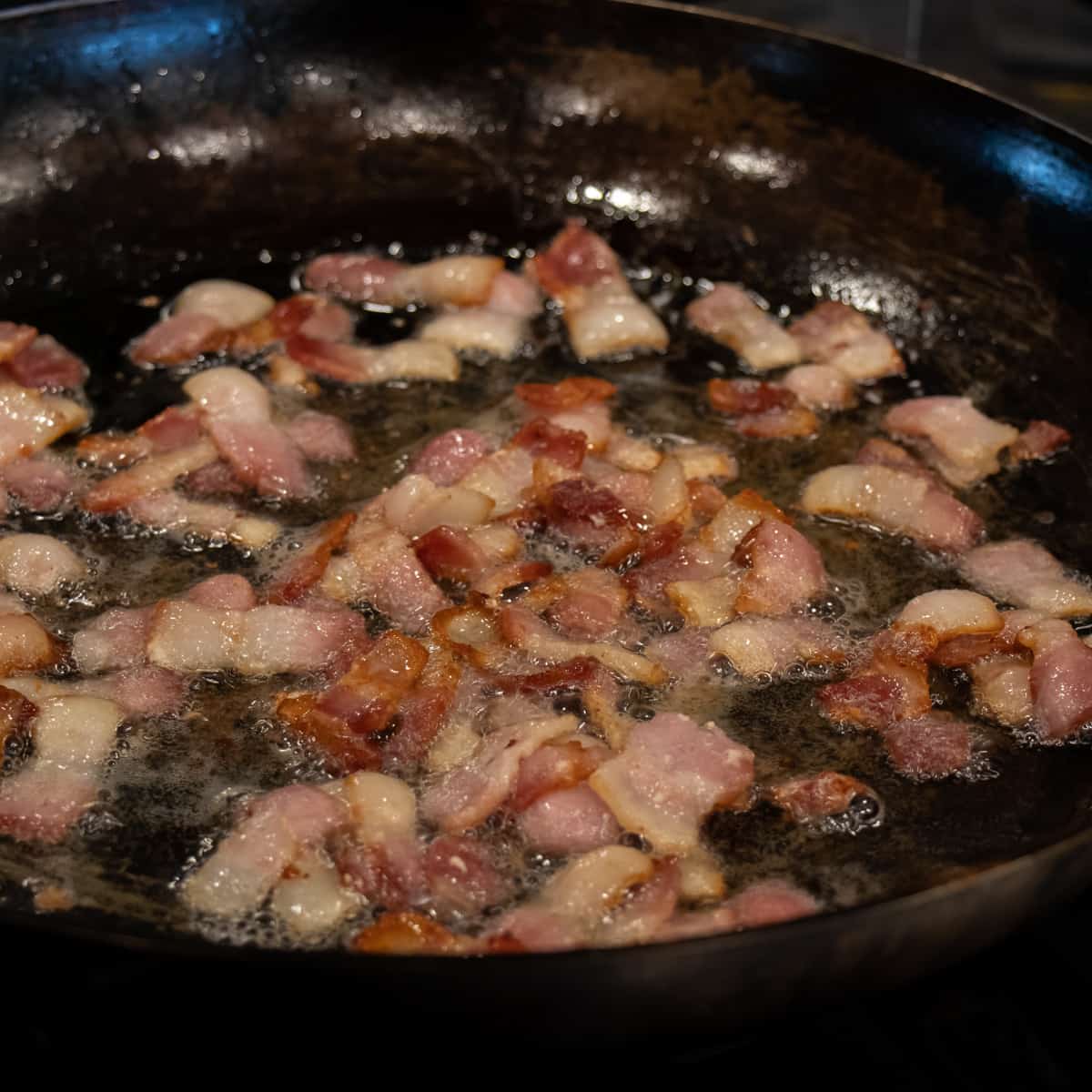 Start things off by cooking the bacon. I cut them first into small strips and then fry them in the skillet over medium heat. The temperature does not need to be too high. I find medium is perfect for browning and rendering the bacon. 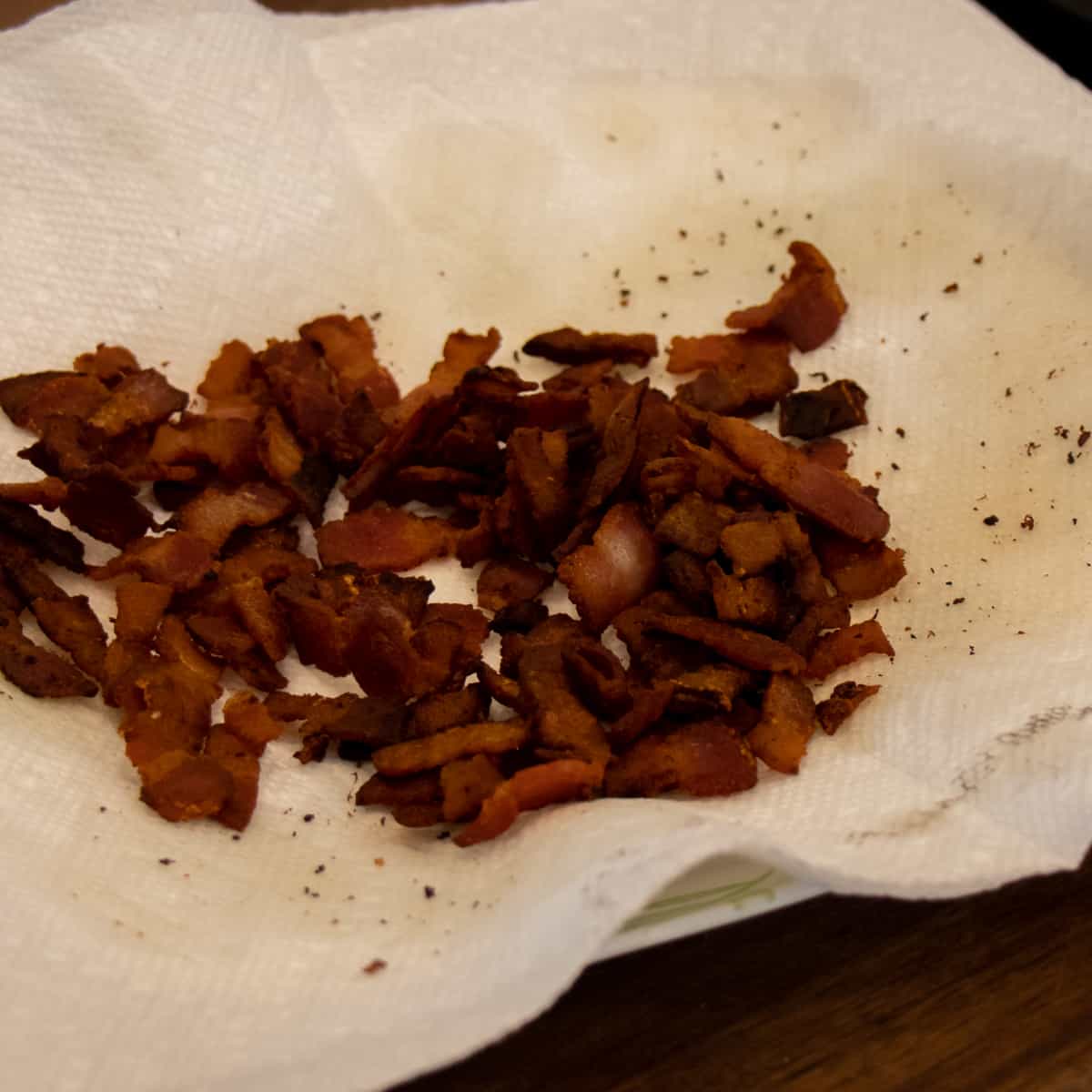 Once the bacon is browned and crispy, scoop them out of the skillet and let them drain on a paper towel. Drain most of the bacon grease off the skillet, but keep a few tablespoons in the skillet. 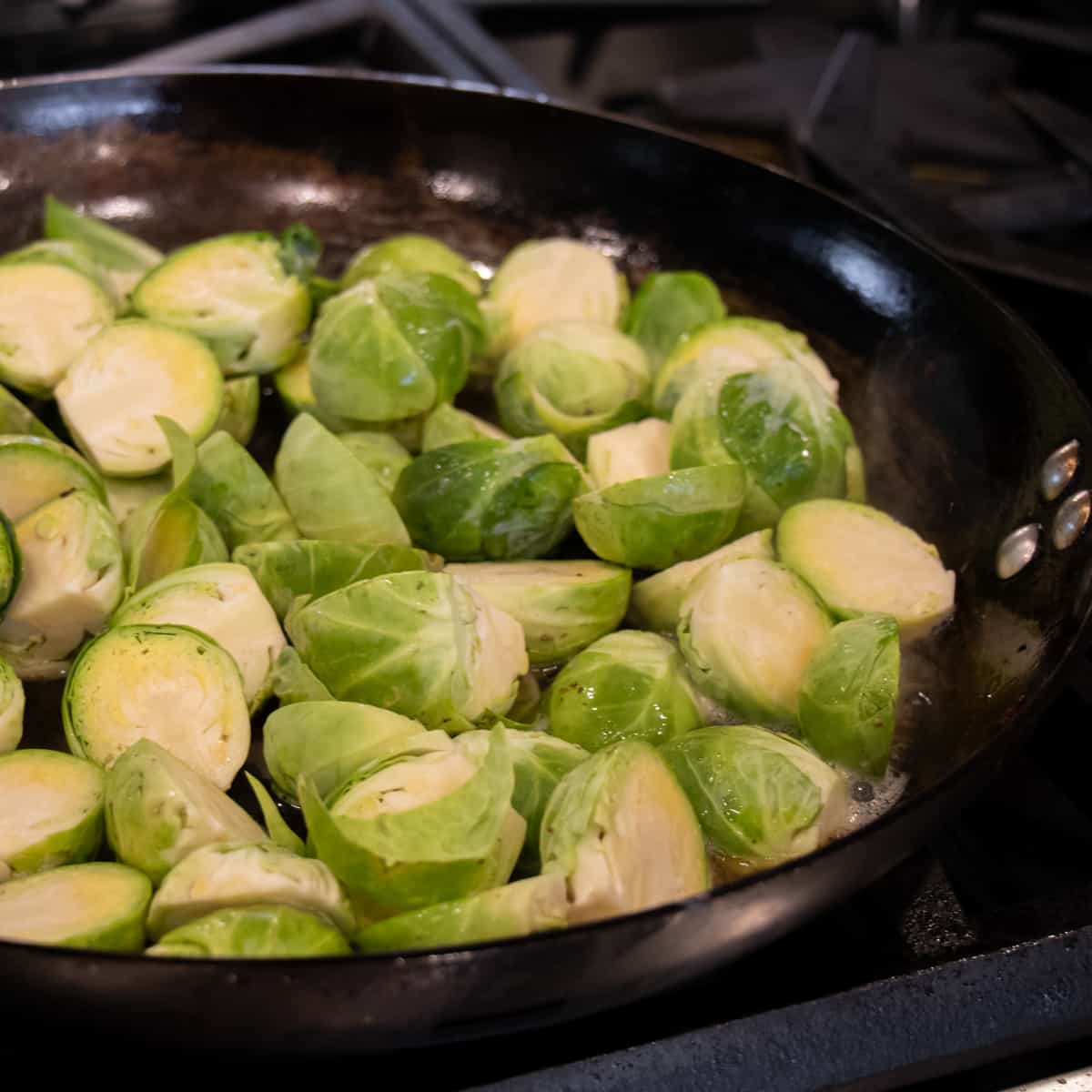 How To Cook Brussels Sprouts In A Frying Pan

Place the brussels sprouts halves in the skillet with the salt, pepper and water. There is no need to add any oil or butter since there is still some bacon grease in the pan. 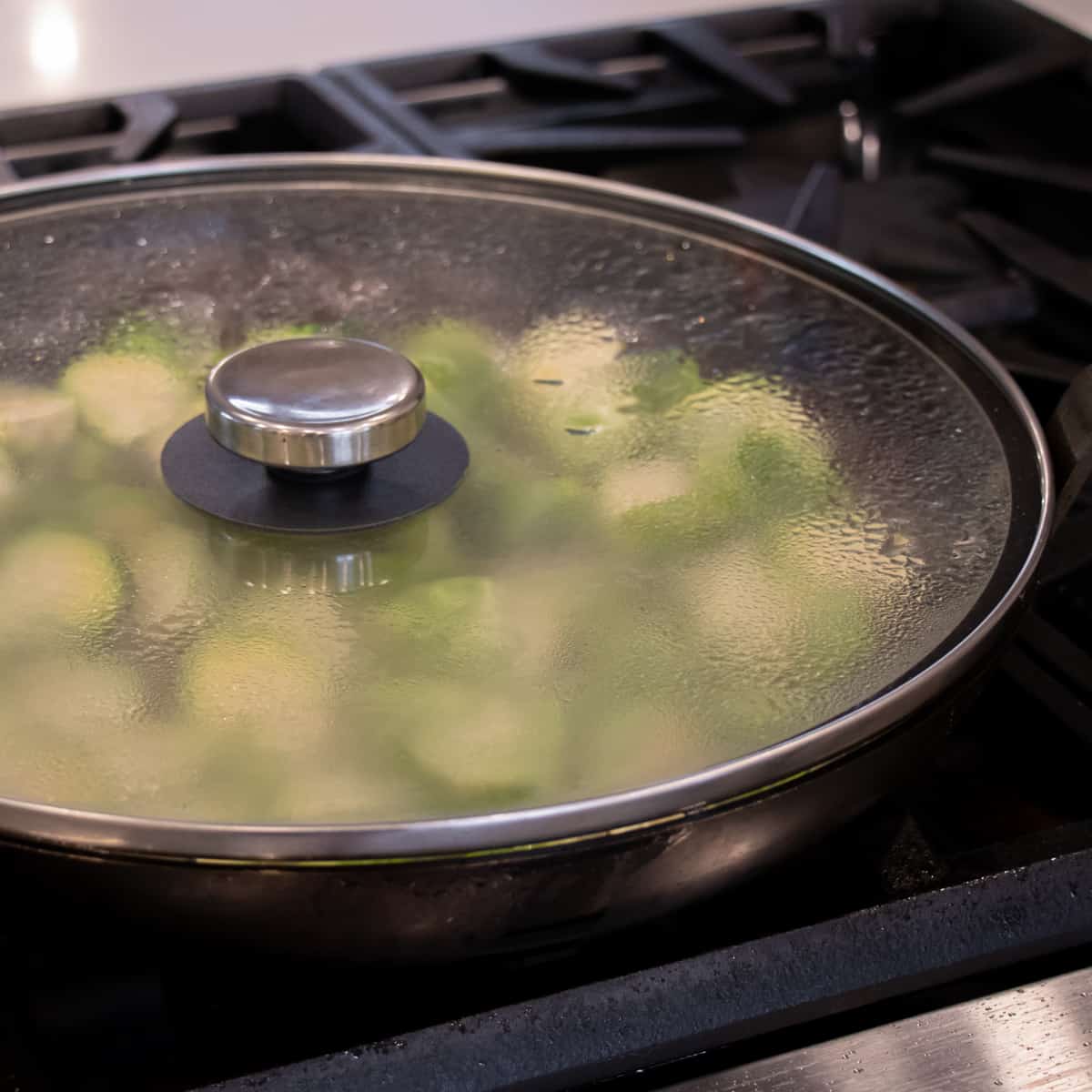 Put a lid on the skillet to cover the brussels sprouts. Since these vegetables are hard and quite dense, they need a little help to cook them through. This is a combination of steaming them at the same time they are pan fried. 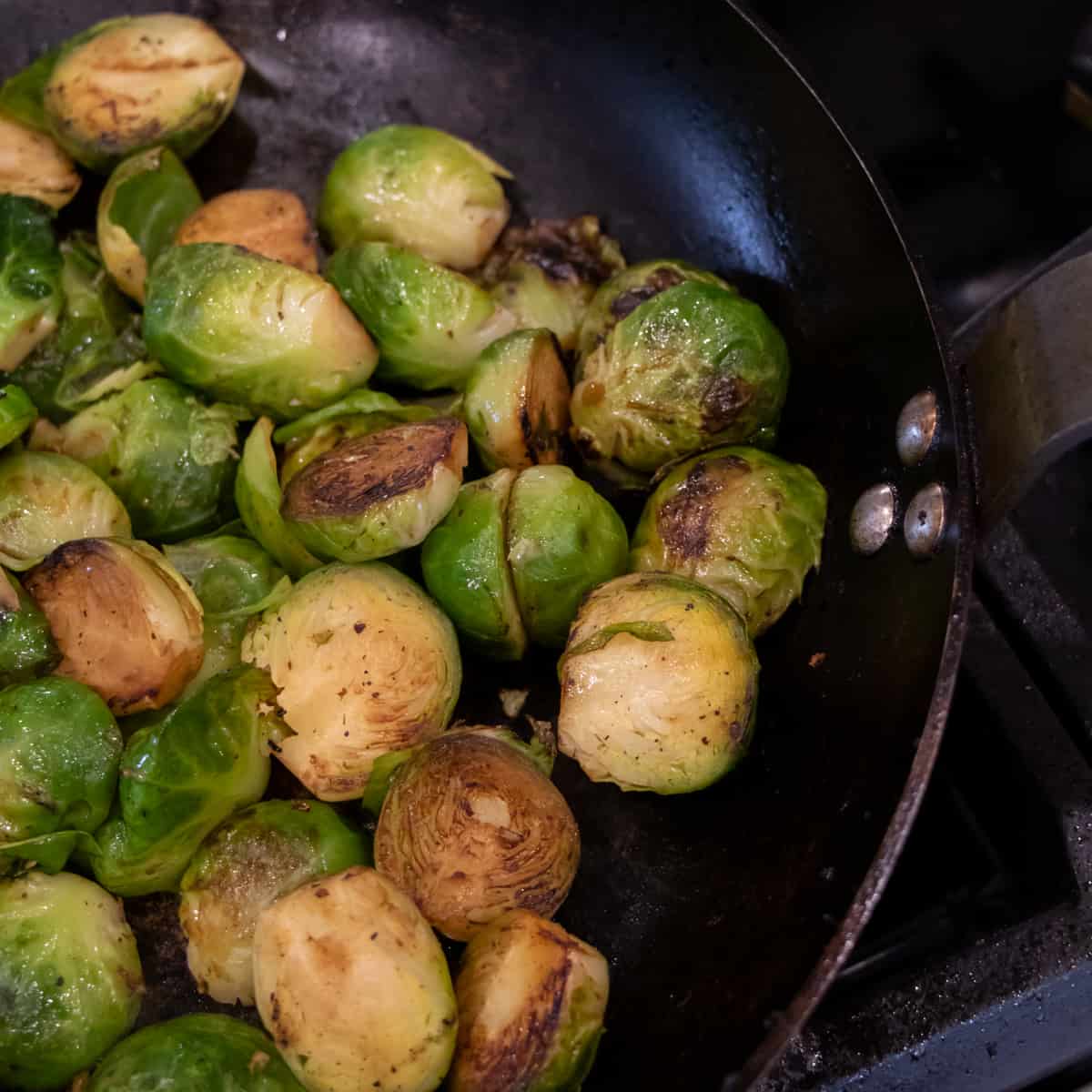 After cooking with the lid on for about 6-8 minutes, remove the lid, lower heat and continue to cook. During this time the water will evaporate and the brussels sprouts will start to brown and caramelize as they sauté in the skillet. 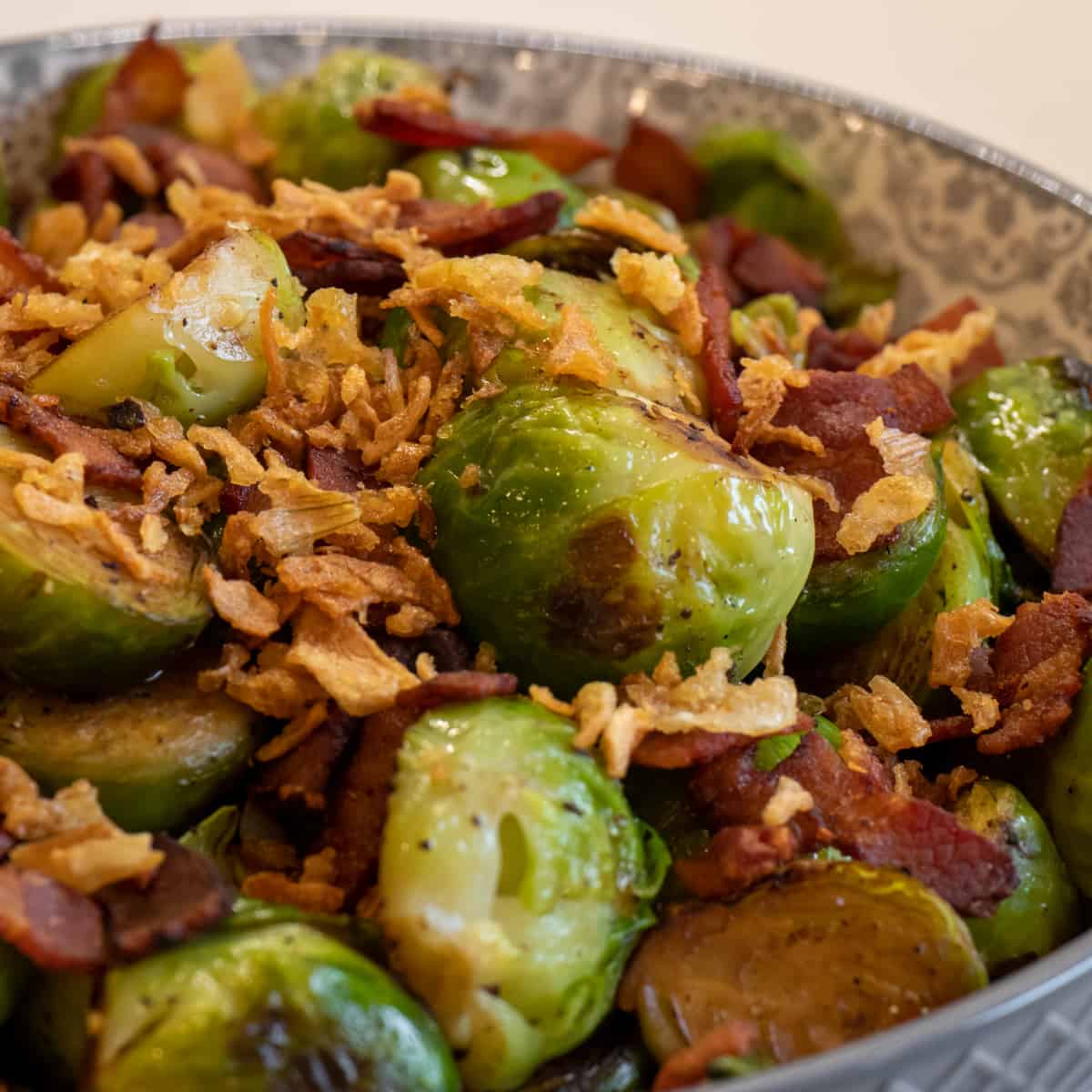 The brussels sprouts are finished cooking once you can easily stick a fork in them with no resistance. Remove them from the heat, place them in a serving bowl, and top them with the cooked bacon pieces and crisp fried onions.

Be prepared – this dish will be popular! Any time I make them, they disappear FAST.

If you are looking for a new side dish for your next holiday dinner, then look no further. These brussels sprouts are delicious and the perfect compliment for Thanksgiving turkey or Christmas dinner. Serve these alongside these Garlic Mashed Potatoes or Dairy Free Scalloped Potatoes.

Check out these other brussels sprouts recipes!

5 out of 5
4 reviews
Print
How to cook brussels sprouts in a pan on the stove with crumbled bacon and crispy fried onions using this simple recipe. A delicious side dish with browned caramelized brussels sprouts that taste similar to being roasted.
Prep Time: 10 minutes
Cook Time: 20 minutes
Total Time: 30 minutes
Servings: 6