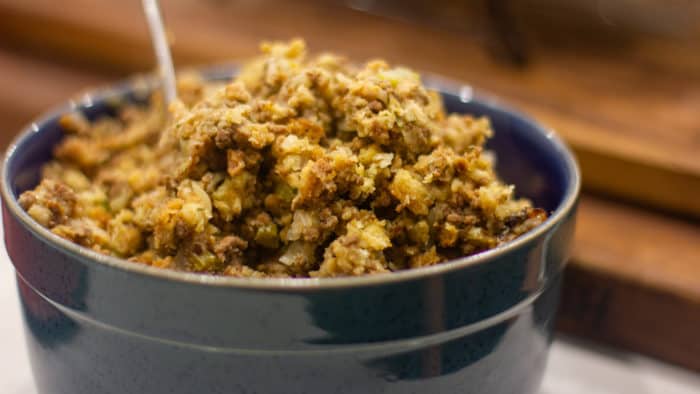 Turkey stuffing is always the one dish where there is never enough for our family. Everybody loves it so much, that by the time people are having seconds, the bowl of stuffing is empty. Family members look around in dismay and I will often go back to the turkey with a spoon to see if I can find any more in the crevices of the turkey cavity.

Yes, the stuffing is so good. But part of the reason is because this is my mom’s classic turkey stuffing recipe. I remember that my mom used to make this when I was a kid. Actually, I think she got this stuffing recipe from her mom as well. It has been a traditional family recipe for many decades! 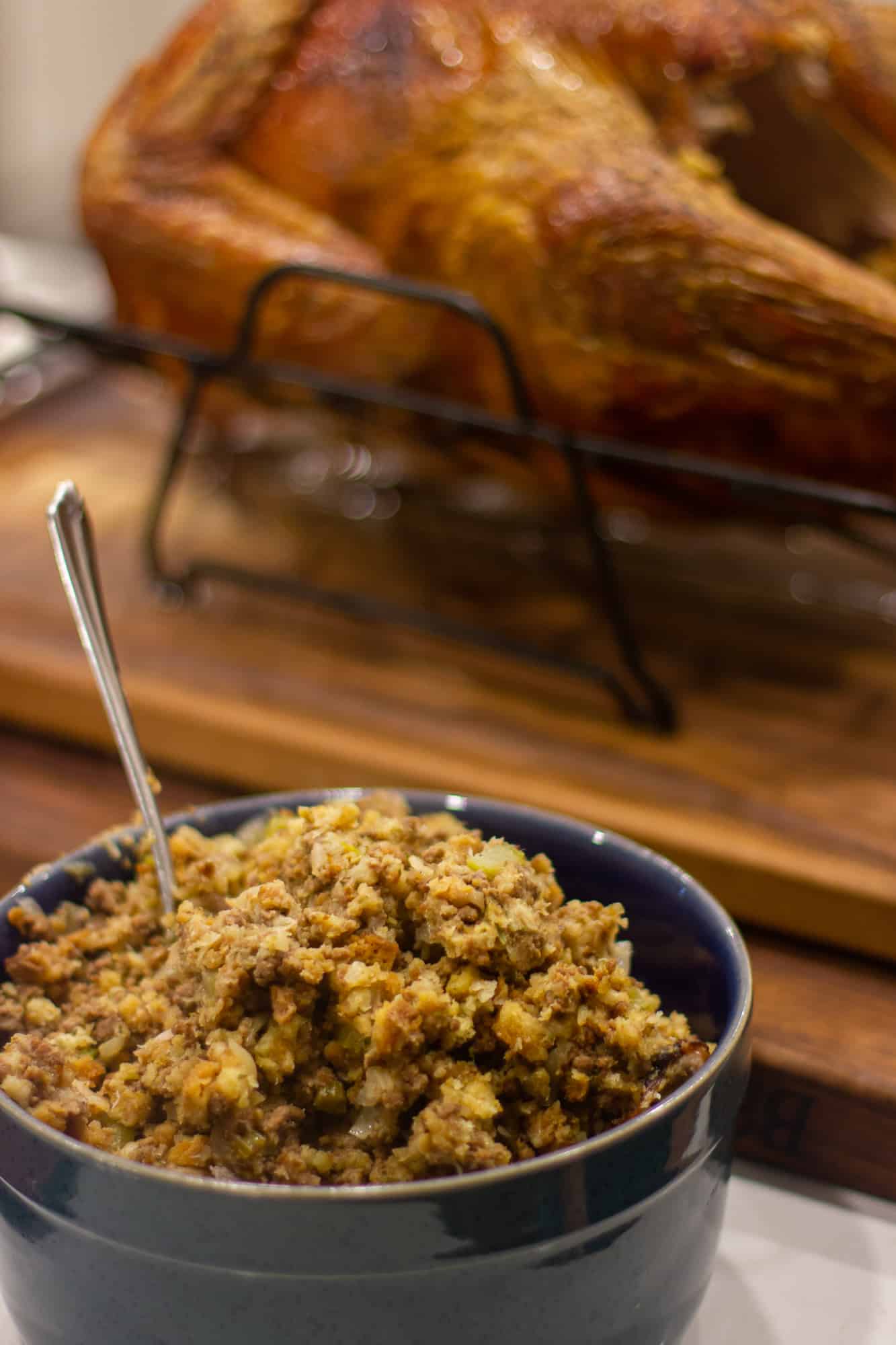 There is one aspect of my mom’s turkey stuffing that is different than the way many other people make stuffing. My mom uses some ground beef in her stuffing. For me, this was always normal and the standard way stuffing was made.

It was not until I had stuffing other people made, that I learned beef in stuffing was not common. But, it is so good and this recipe is easily my favourite type of stuffing.

While meat in stuffing is not the most common thing, there are some traditions and examples that use meat in turkey stuffing. I have had Italian style stuffing with sausage meat in the bread stuffing. There is also cornbread and sausage stuffing which is delicious as well.

If you have never tried meat in your turkey stuffing, I encourage you to give this a try. There is so much flavour and it tastes so good! 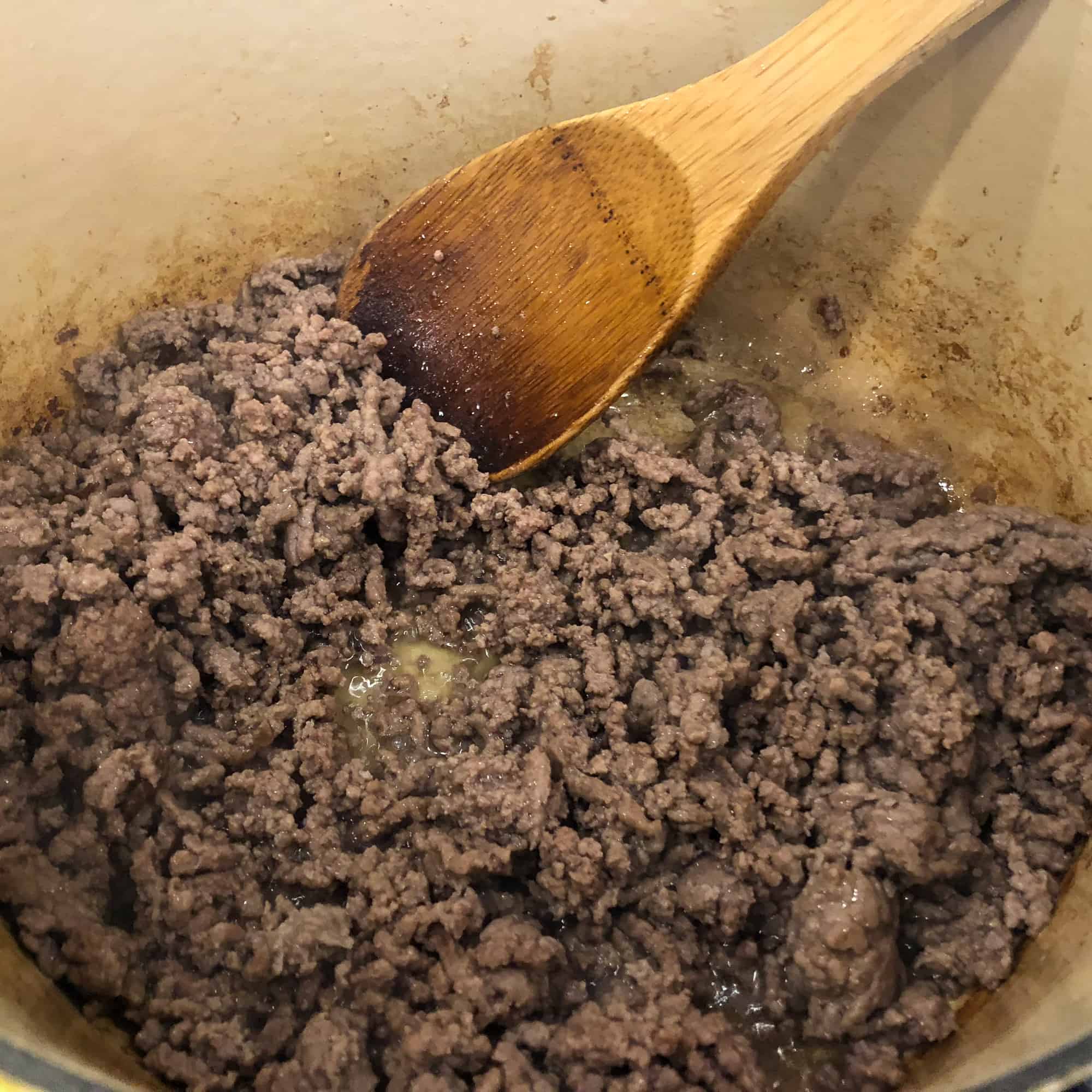 How to make turkey stuffing

The first step in making my Mom’s Turkey Stuffing is to brown the ground beef. I use a pot or dutch oven that is large enough for the bread to be mixed with the beef afterwards. I like to make the stuffing right in the pot so I do not need to dirty another bowl.

Brown the beef over medium heat until all the meat is cooked through. Use a wooden spoon to break the meat into small even sized chunks.

Once the beef is evenly browned, drain the grease and discard. 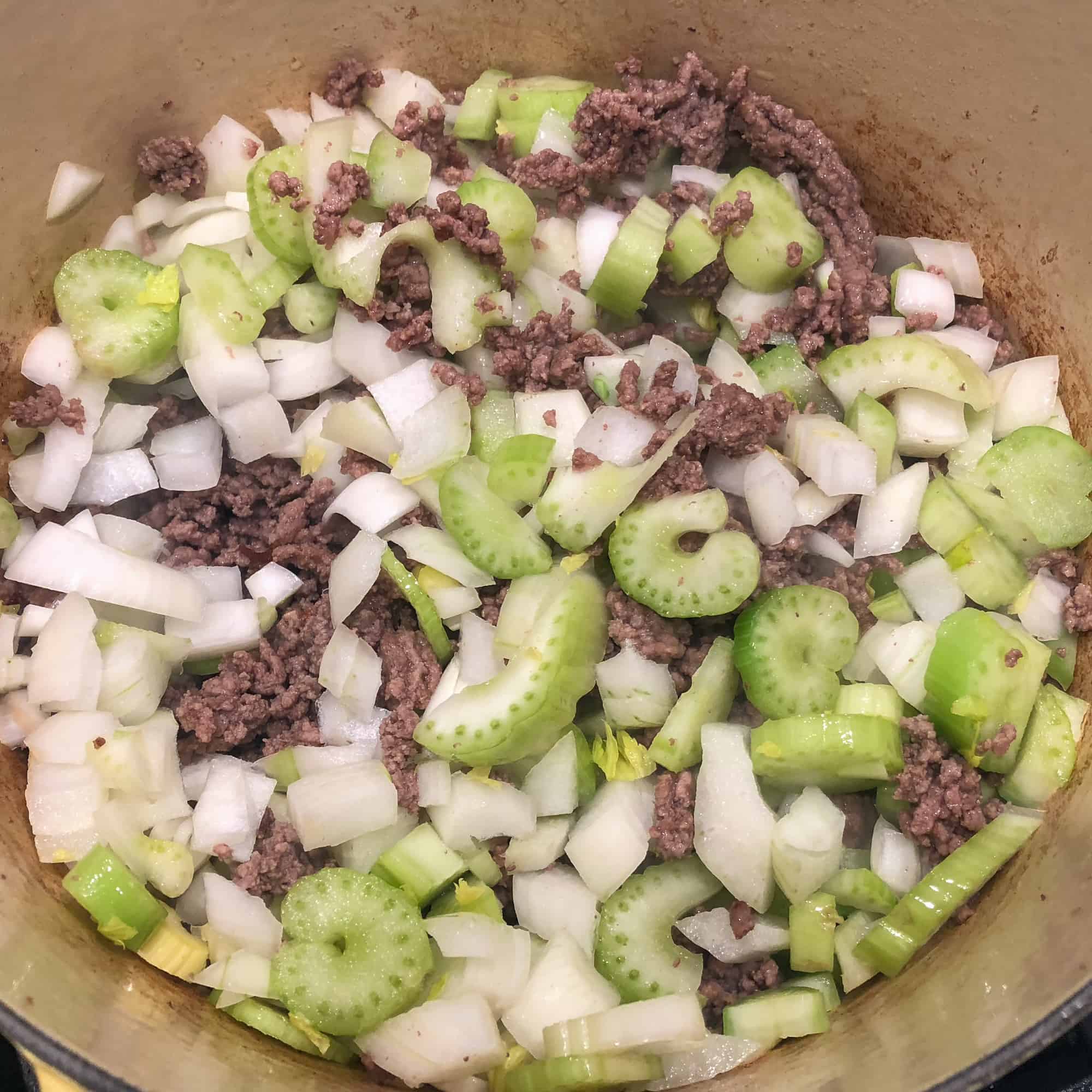 Stir in the diced onion and celery. Continue to cook until the vegetables are soft and cooked through. Turn off the heat and let the beef and vegetables cool slightly. It does not need to cool until it is room temperature, but it is easier to spoon into the turkey cavity when it is just on the warm side. 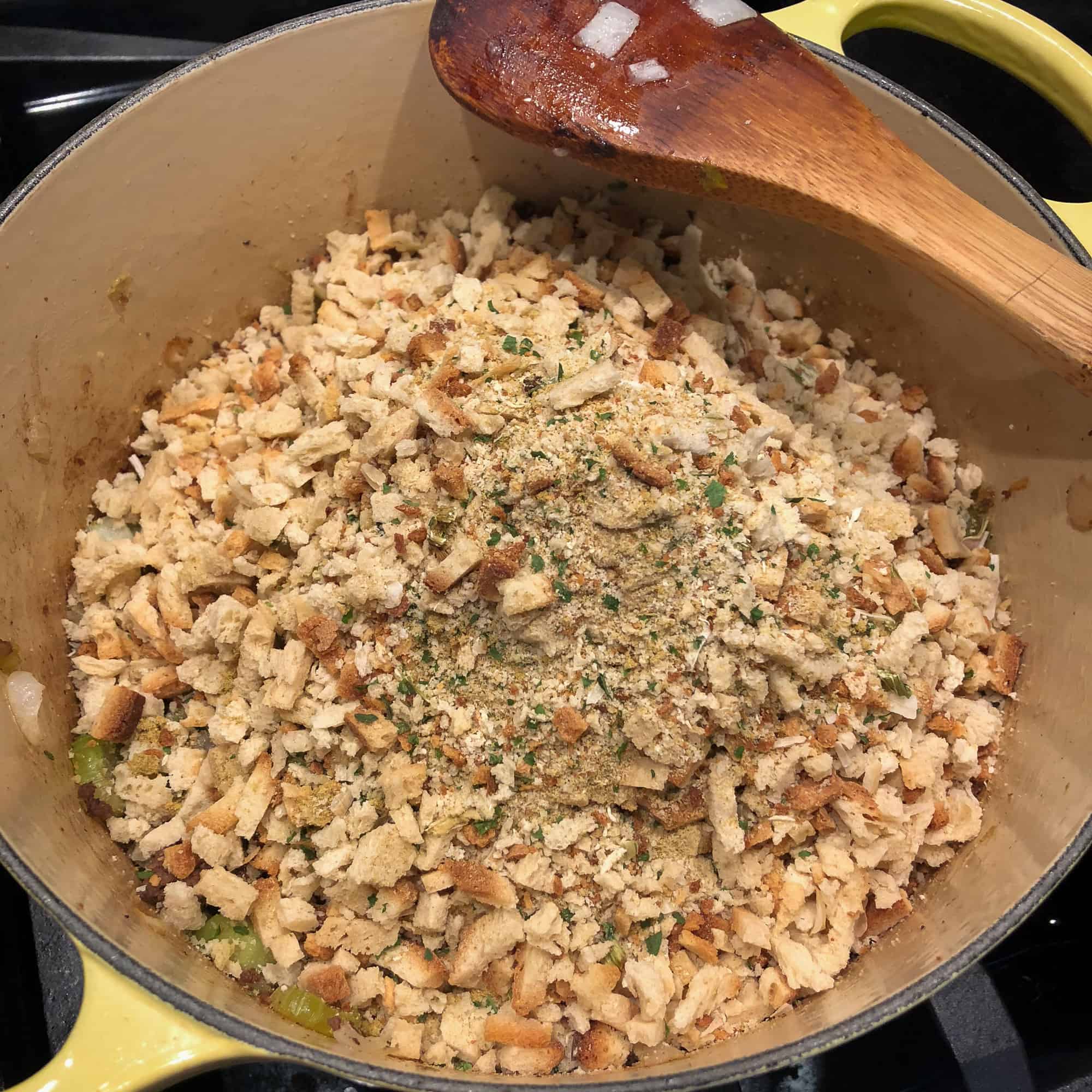 My mom has always used boxes of store-bought stuffing mix for her turkey stuffing. There are many different brands and they are all quite similar. Regardless of the brand, the boxes should be around 6oz (170g) in size.

Dump in the boxes of stuffing mix. Since the stuffing mix is already seasoned, it is not necessary to add any extra seasonings. 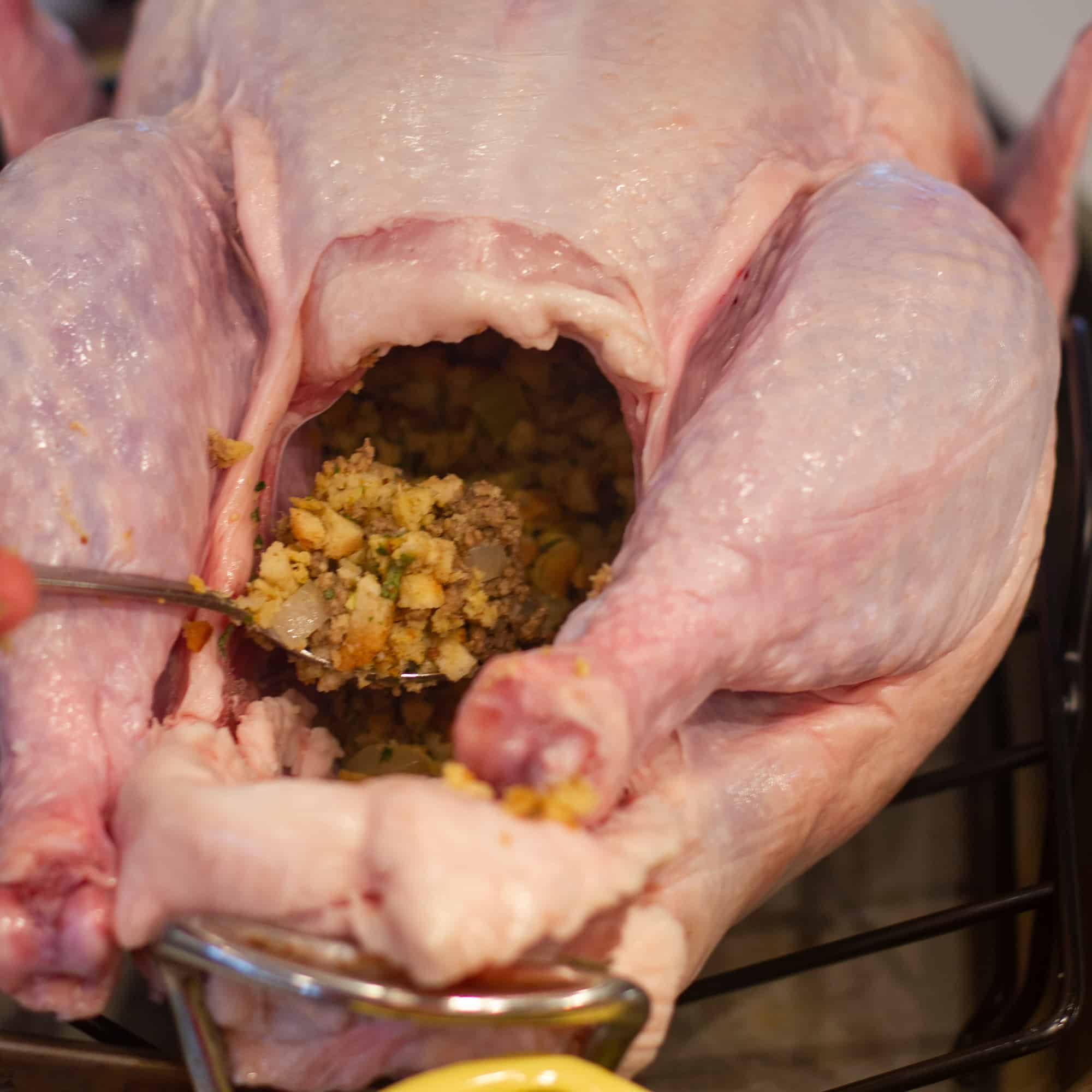 Get the turkey ready to be stuffed. Make sure that the inside of the bird is empty of the turkey giblets, neck or anything else that sometimes comes with the turkey. 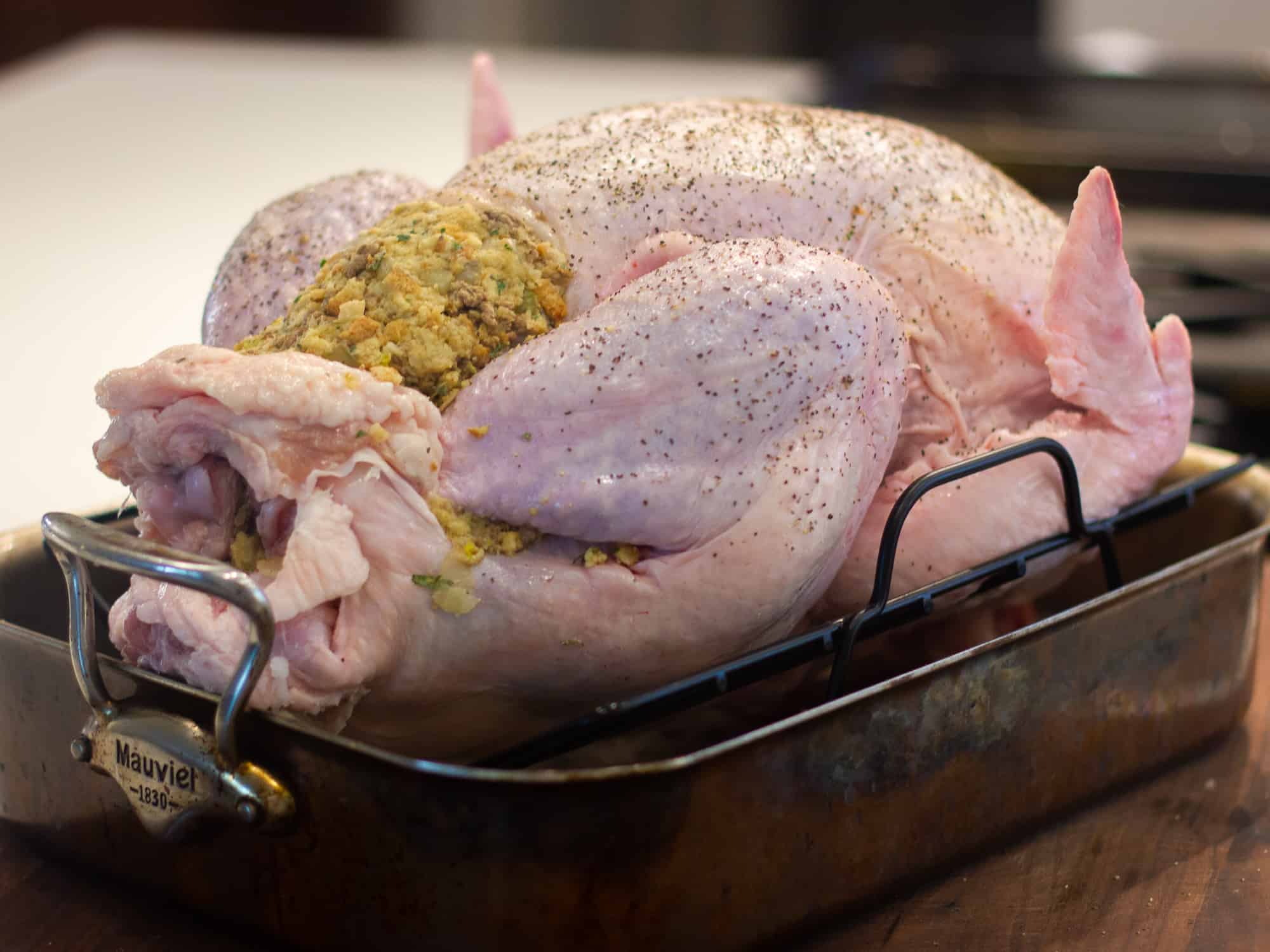 I like to put as much stuffing as possible into the turkey because it is always high in demand by everyone in the family. Sometimes, there is a little space in the neck area of the turkey that can hold stuffing as well. There is usually some loose skin and a few large spoonfuls of the stuffing can fill in that pocket and the skin can wrap around the stuffing, holding it in place while it is in the oven. 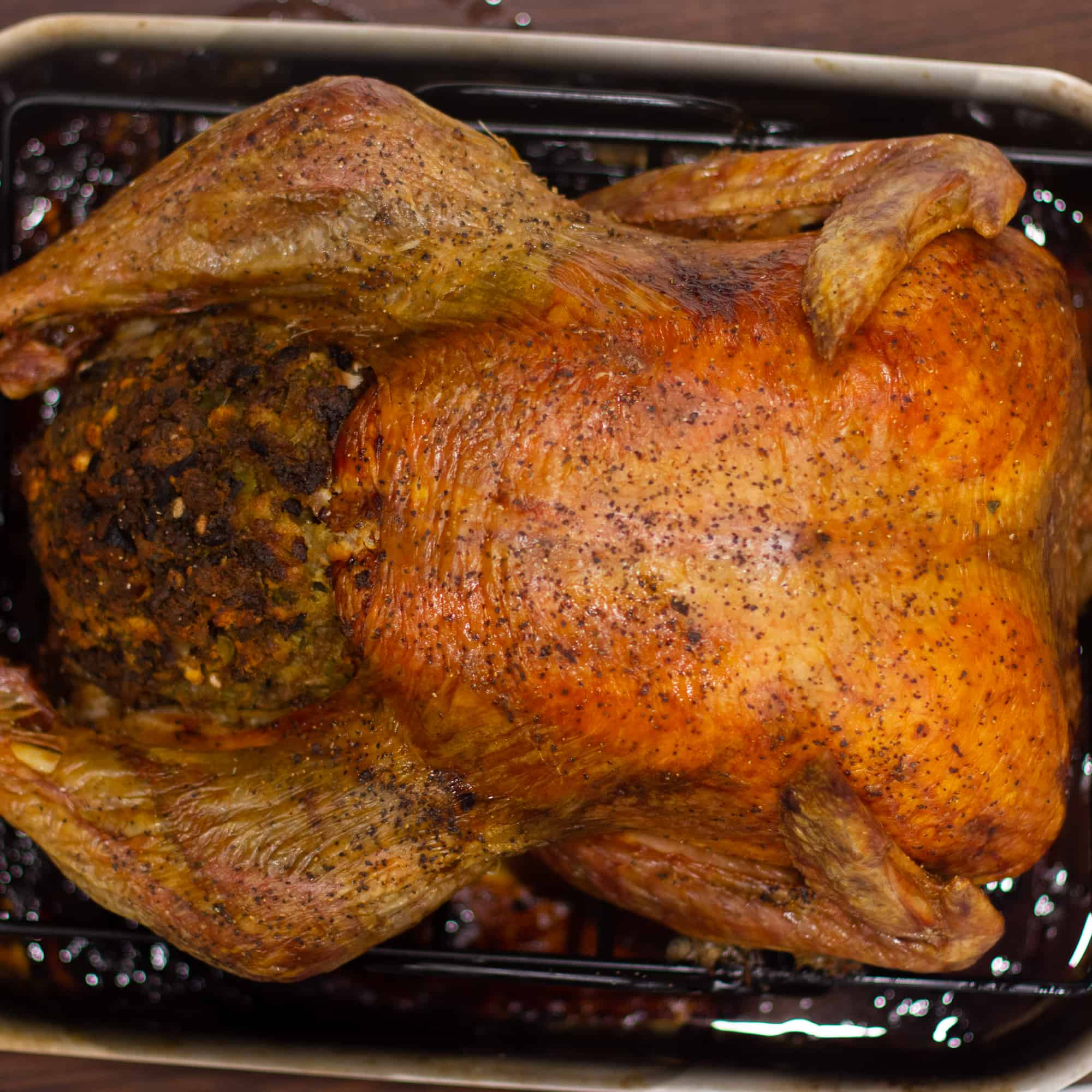 How long to cook a stuffed turkey?

Roasting a turkey that is stuffed takes longer than one that is unstuffed. I have a detailed post on how to cook an unstuffed turkey. You can check out that post for some specific details for cooking a turkey in the oven.

Cooking a stuffed turkey obviously takes longer than one that is unstuffed. A 14 pound stuffed turkey takes about 4 1/2 hours to cook. Use a digital thermometer to check if the turkey is ready.

I check three spots with the digital thermometer probe and each spot should read at least 165F. Check these spots: the thickest part of the breast, the deepest part of the thigh and right in the middle of the of the stuffing. Once they all read a minimum of 165F the turkey is finished cooking. 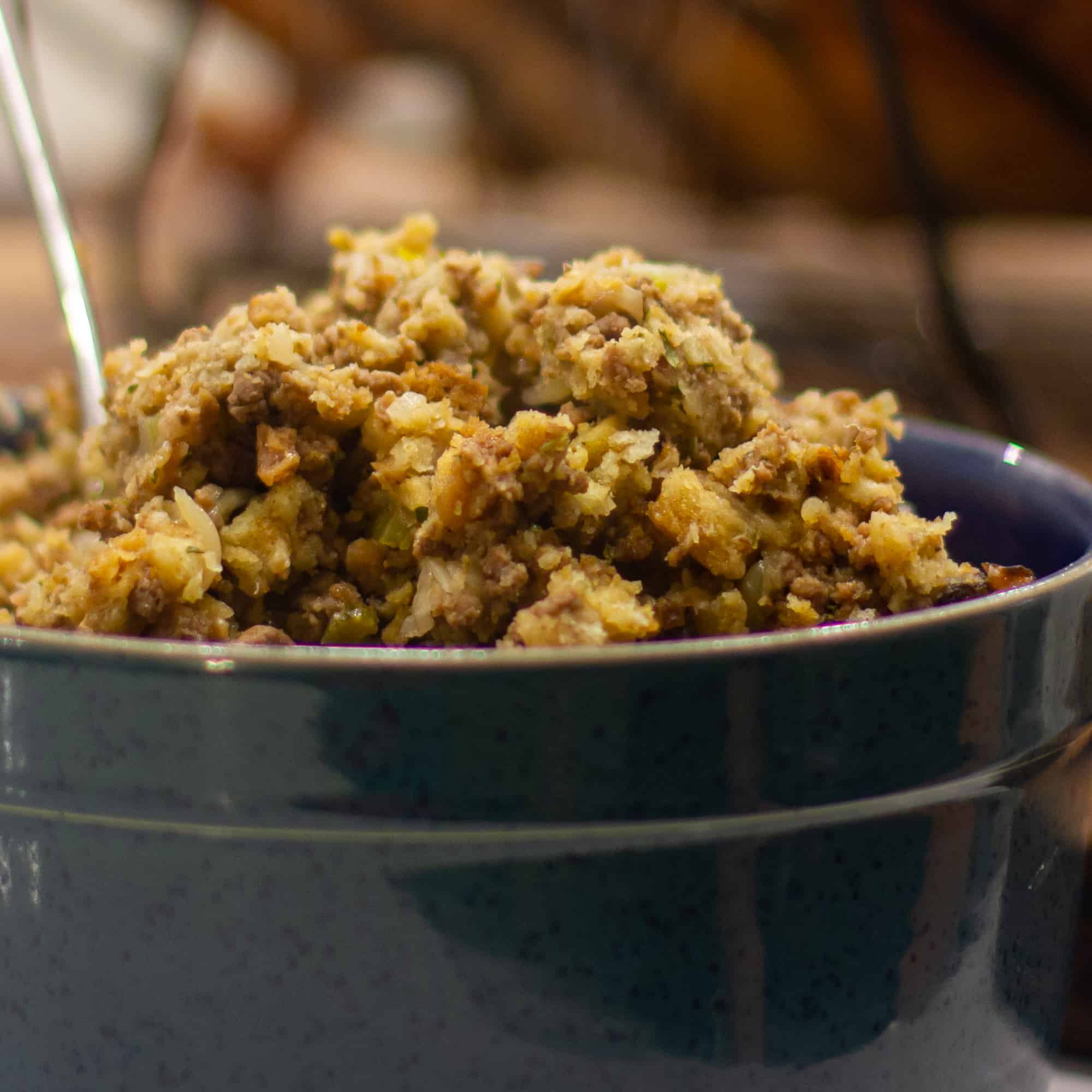 Turkey and stuffing is such a traditional part of Thanksgiving or Christmas holiday dinner and here are some other dishes that are perfect compliments.

4.75 out of 5
4 reviews
Print
Turkey stuffing recipe made with ground beef, onion, celery and stuffing mix. The perfect stuffing for holiday dinners like christmas and thanksgiving. This is enough stuffing for a 14 pound turkey.
Prep Time: 5 minutes
Cook Time: 20 minutes
Servings: 8 servings