I can hardly believe that it is almost October. The leaves are starting to fall off the tree in our front yard and the morning walks to school are getting brisk. On Saturday the boys have a track meet and the weather says that it will be quite chilly. It will probably be great for the kids running, keeping them cool, but colder than what the parents would like. Whenever I think of October I think of Oktoberfest, remembering my days at Wilfrid Laurier University and how the Kitchener/Waterloo area gets all excited about Oktoberfest.

So, since Oktoberfest is a German celebration, I thought it would be good to have a German themed dish. Wiener schnitzel is popular in Austria and Germany and traditionally served with veal. Pork is a popular variant of schnitzel, but one thing I just learned was that in Germany and Austria, actual wiener schnitzel must be served, by law, with veal. It is against the law there to make schnitzel with pork and call it wiener schnitzel. This makes me wonder what would happen if some restaurant tried to get away with it. Some rebel chef makes the dish with pork call it wiener schnitzel. The customer would take a bite and know immediately this is not the meat from some young calf. What do they do then? Do they call the Schnitzel Police? Does the restaurant get stamped as a fraud? Things that make you go hmmmmmm.

Anyway, I made it with pork. Also, the breadcrumbs were made with fresh bread. I used a loaf of french bread and cut off and removed the crust. I ground the bread in a food processor with romano cheese, fresh parsley and thyme. The fresh breadcrumbs give the crust a light and crisp coating. Also, No Frills has pork loin roast on sale. I trimmed it up and sliced it in 1/4 inch slices and then pounded them down. Last fall I made apple sauce and I still have a couple jars left so we served the schnitzel with that. YUM! I have some instructions with the pictures but the full directions are at the bottome of the page as well. 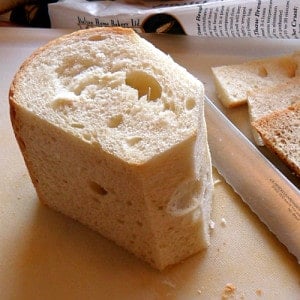 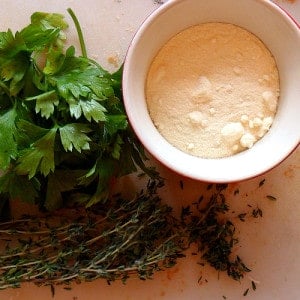 Cut the crust off a loaf of bread and discard. Fresh thyme, parsley and romano go in the bread crumb mixture. 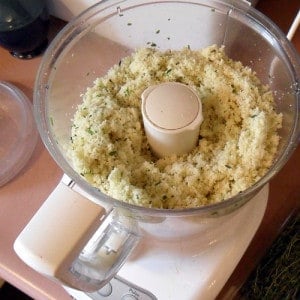 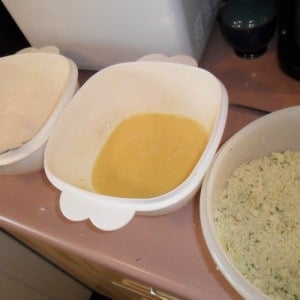 Pulse the bread, herbs and cheese in a food processor until there is an even consistency. The three stage process to bread the meat. First, dredge in the flour, then dip in the eggs then dredge in the breadcrumbs. 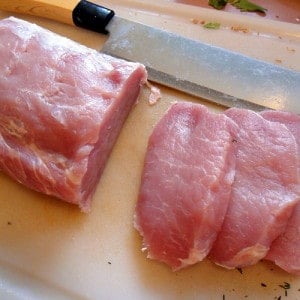 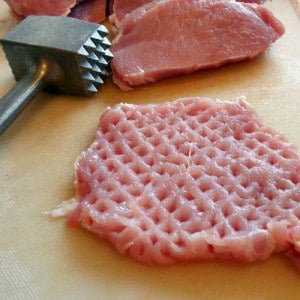 You can use boneless pork chops or do what I did and buy a roast and slice it up. Pound the chops with a meat mallet. 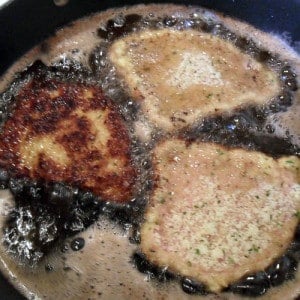 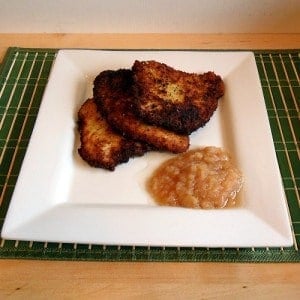 Once the meat has gone through the three stage breading process, lay them in a frypan that has oil about 1/4 inch deep. Fry about 3 minutes per side, or until golden brown. Serve with apple sauce.