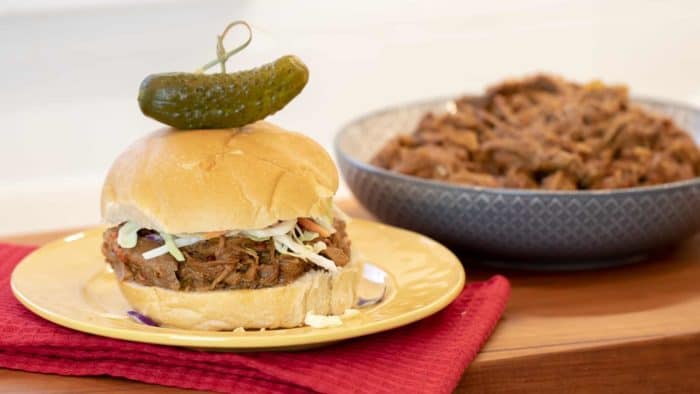 BBQ pulled pork on a bun is one fabulous meal. This Instant Pot pulled pork is perfect for a big party, game day event, pot luck, picnic, or just a family meal, pulled pork is always a hit. I love pulled pork because it is simple to make and quite economical. Using a cheaper cut of pork like a shoulder, picnic, butt or blade, one roast will feed a crowd.

During the summer months I smoke pork roasts for pulled pork, but once the weather gets cold and snow comes, I do most of my cooking indoors. Making pulled pork with an electric pressure cooker like an Instant Pot could not be easier and a fraction of the time as it takes when using a smoker, slow cooker or oven. 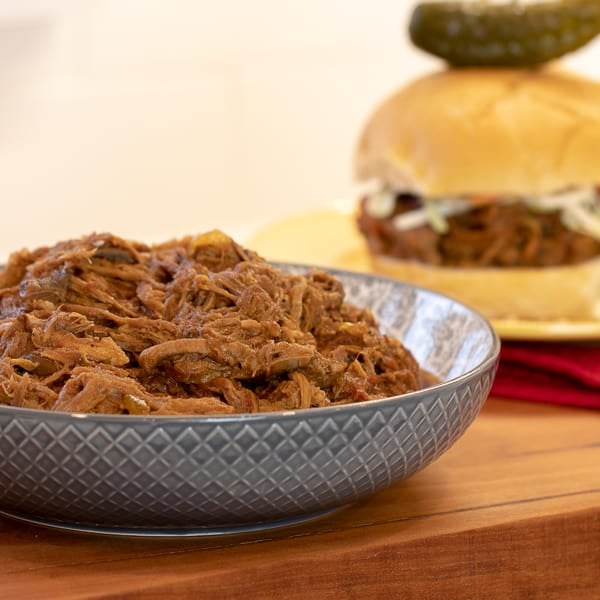 You can make pulled pork using many different cooking methods. Here are some other recipes and instructions for making pulled pork. 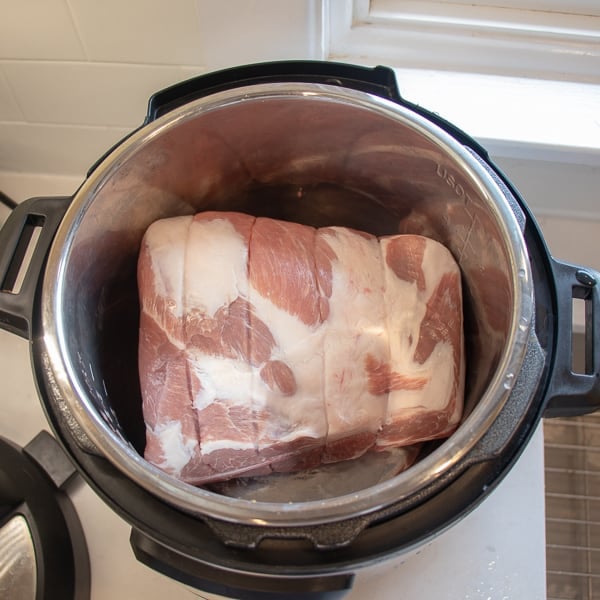 I like to keep the pork roast whole, with the bone in while cooking in the pressure cooker. It is definitely possible to get a boneless roast and cut it into 1 1/2 to 2 inch cubes. That would reduce the cooking time (60 minutes should be fine with a boneless roast cut into cubes).

But, I find using a roast with the bone in provides an enhanced flavour. This roast in the picture above is a blade roast (also called shoulder or boston butt). Picnic roast also works very well, but I find that there is a lost of fat in that cut of meat.

A pork roast of around 4 pounds is perfect for this recipe. Place it in the pressure cooker inner pot. 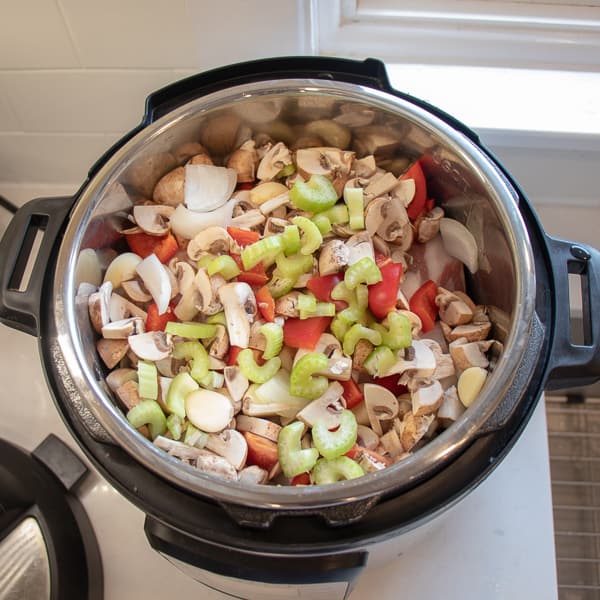 When making pulled pork in either a pressure cooker or slow cooker, there is definitely no need to add all the vegetables that I use, but I find that all these chopped up veggies add such a nice flavour to the pulled pork on a bun. It’s funny as well, that most of them end up all mushed up in the sauce so you don’t even notice them. A great way to get the kids to eat their veggies – haha!

I use onion, red pepper, celery, mushrooms and garlic. Chop them all up into rough size chunks and dump them all on top of the pork roast. 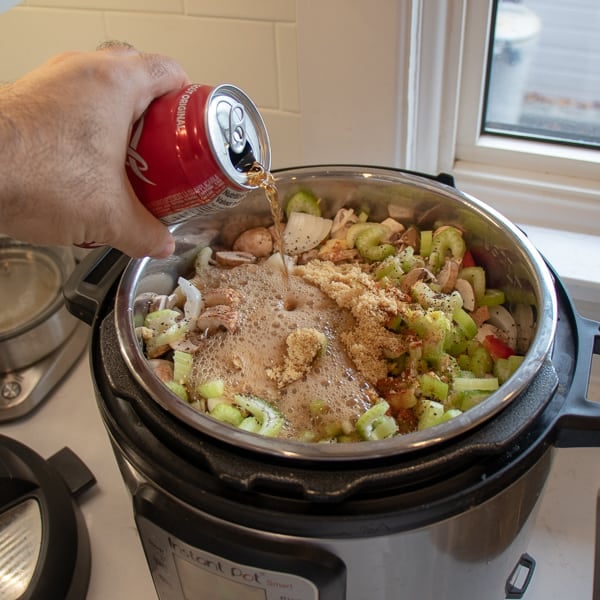 Finally, top with the brown sugar, seasonings, pop and water.

Turn on the pressure cooker and set to cook on high pressure for 90 minutes. 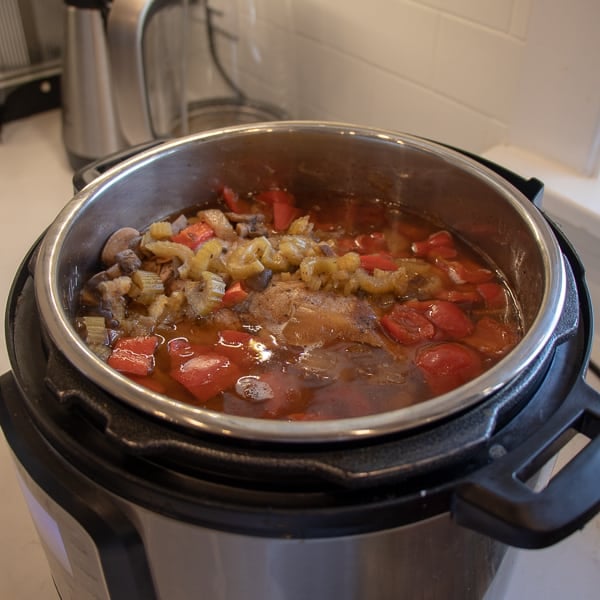 Once the pressure cooker has finished cooking for the 90 minutes, I like to let the pressure release naturally. This takes around 30 minutes or so.

Once the pressure is released and you remove the lid, you are going to want to drain the liquid. Use oven mitts to lift the inner pot out so that the liquid can be drained. 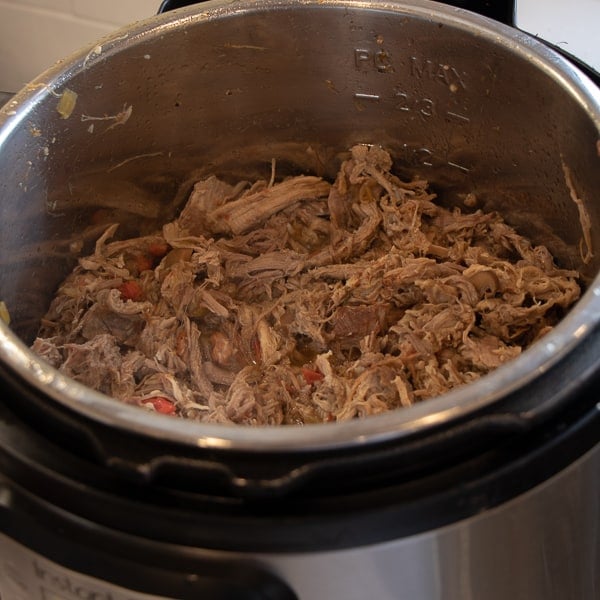 Once the liquid is drained, take out the pork roast and remove the bone and any excess fat. Using two forks, shred the meat into thin strands. Place all the shredded meat back into the pressure cooker pot. Stir so that the meat mixes with all the cooked veggies.

Pour in a bunch of your favourite BBQ sauce and stir to mix throughout the meat. I use about 2 cups of sauce, but you can add more or less based on your preference.

The pulled pork is ready to serve! Electric pressure cookers also have a ‘keep warm’ function which is handy with a meal like this. If you are preparing this for a party or event, it can be made just before and then set it to keep warm so that people can scoop out some meat when they like. 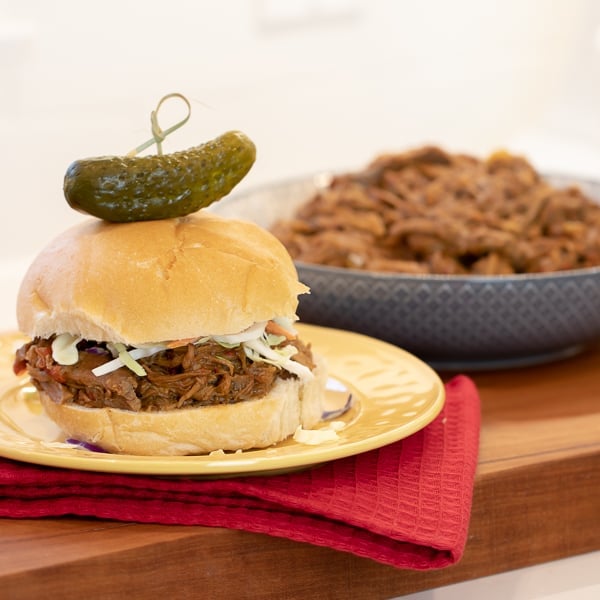 To serve, grab a bunch of the pulled pork with some tongs and place on a sliced bun. If desired, you can add some more BBQ sauce. Top with some cole slaw to add a little bit of crispiness in each bite!

No ratings yet
Print
How to make pulled pork in a pressure cooker like an Instant Pot. Simple recipe that uses a pork roast, like a shoulder, blade or picnic, can of pop, BBQ sauce, onion, peppers, celery and mushrooms for a pulled pork full of flavour!
Prep Time: 10 minutes
Cook Time: 1 hour 30 minutes
Total Time: 1 hour 40 minutes